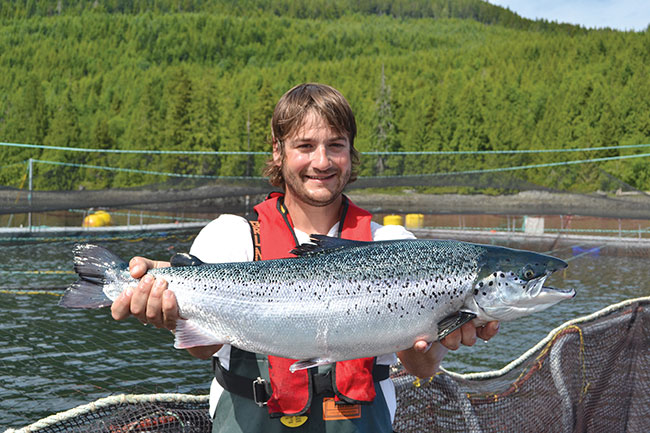 The study findings offer further proof that Atlantic salmon producers are on the right track with their strategy of giving their fish extra time in closed containment Photo: Cermaq

Helping post-smolt Atlantic salmon get used to saltwater before transferring them to the sea strengthens their skin and reduces their vulnerability to wounds, according to a new research from Norway.

In an earlier study, Nofima scientists found that the immune system of Atlantic salmon weakens during the time of smoltification, which is the developmental stage prior to their transfer to seawater cages.

A new study sought to explore possible interventions that could help strenghten the fish prior to transferring them to the sea. University of Bergen student Marte Fredriksen and the Nofima researchers were particularly interested in studying skin ulcers caused by a bacterium called Tenacibaculum.

In trials conducted by the researchers with Cermaq R&D, the skin of post-smolt salmon raised in freshwater tanks developed differently from those reared in tanks where salt was added to the water (26 parts per thousand of salt).

“We believe that the transition to full-strength seawater is a greater strain on freshwater fish than on brackish water fish. This suggests that the fish can be acclimatised to seawater by keeping them in brackish water before transferring to seawater, therefore reducing the risk of tenacibaculosis,” said Christian Karlsen, an aquamedicine scientist at Nofima and Fredriksen’s supervisor.

The findings confirm that Atlantic salmon producers are on the right track with their strategy of giving their fish extra time in closed containment to strengthen them against some of the challenges they will encounter in the ocean.

“Prolonged time in purified seawater before transferral provides a number of benefits, both during the land phase and also later on in relation to the performance, health and welfare of the fish,” said Cermaq’s Sverre Bang Småge.