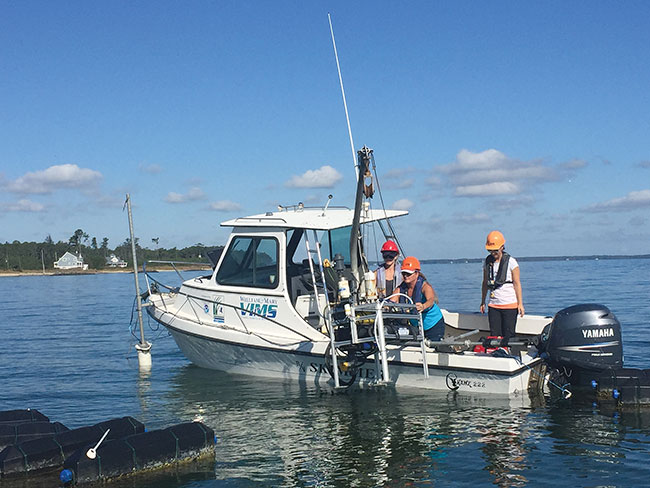 Oyster farming’s impact on water quality in Chesapeake Bay is small but important, according to a new study by researchers the Virginia Institute of Marine Science (VIMS).

“This important research demonstrates that, while the positive impacts on water quality may be small, just the presence of oyster aquaculture improves the health of the bay,” said Andy Lacatell, Virginia Chesapeake Bay director of The Nature Conservancy, which partially funded the study.

The VIMS team conducted the research as part of a broader aquaculture study initiated by The Nature Conservancy. But conflicting views of oyster aquaculture among locals was also a motivation.

According to the researchers, some stakeholders in Chesapeake Bay are concerned about the negative impacts of oyster farms on viewsheds and sediment nitrogen budgets, while others tout the bivalve’s benefits on the environment as filter feeders.

“Given these questions and the continued growth of the industry, stakeholders need a greater understanding of how oyster farms impact the Bay, whether negative or positive,” said VIMS doctoral student Jessie Turner, who authored the study along with Lisa Kellogg, Grace Massey and Carl Friedrichs.

The researchers set out to measure temperature, dissolved oxygen, chlorophyll, turbidity and pH on oyster farms and in the waters around the farms, and conducted benthic sampling.

“We found differences in water quality and current speed inside and outside the farms but they were minor. The differences we measured between sites and between seasons were typically an order of magnitude greater.”

Their findings suggest there’s room for growth in oyster aquaculture in the Bay, as long as growers continue using “low-density culture with well-spaced cages.”

“Even though we detected no effects in the water column during a single tidal cycle, we know oysters take up nitrogen and phosphorus through feeding and growth, and over time we would thus expect harvesting of farmed oysters to be of benefit to the bay,” Turner said.

The study is different from others in that it was done on a “truly commercial scale,” said Kellogg.

“A lot of the research that had been done before involved researchers simulating an aquaculture farm,” she said. “We were looking for something that was truly at commercial scale to see what those impacts are because I think it’s much easier to extrapolate accurately if you’re working somewhere that has 500 oyster cages instead of five or 10.”

Oysters are the fastest growing segment in Virginia’s shellfish aquaculture industry. Their farm-gate value in 2017 was $15.9 million, data from VIMS show.