Survey reveals extent of financial burden on US trout farmers 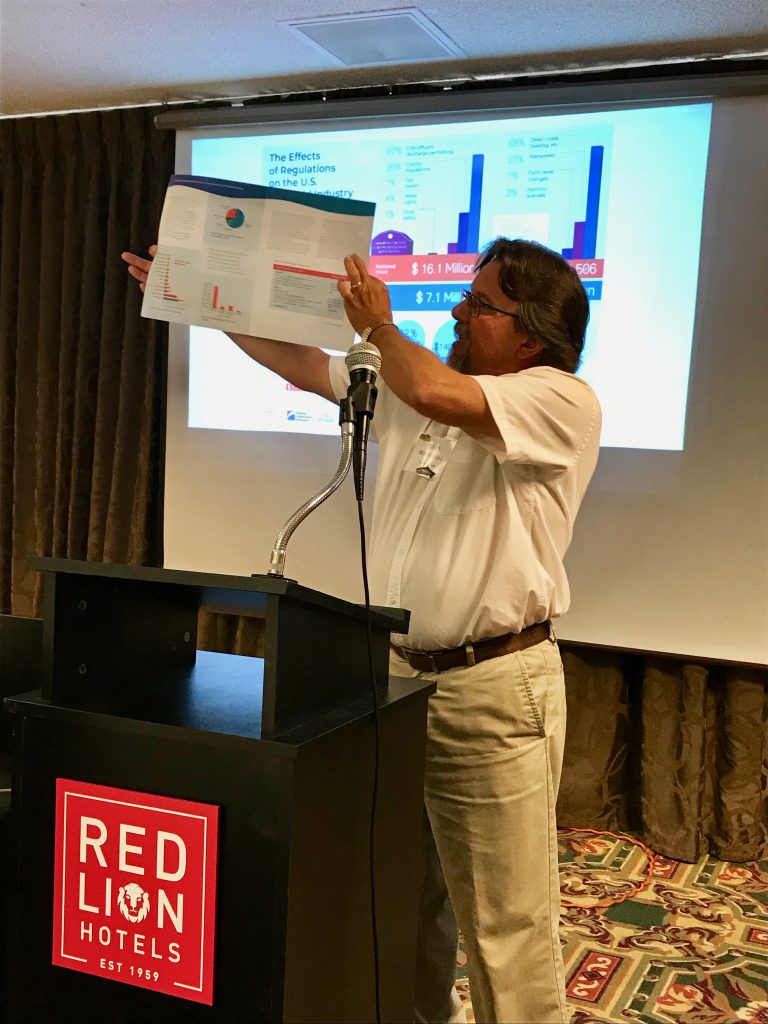 Study team member Gary Fornshell of the University of Idaho shows one of the fact sheets highlighting the costs of US trout farming to attendees at the United States Trout Farmers Association (USTFA) Fall Conference in Seattle, WA (Photo credit: Liza Mayer)

American trout farmers are making some progress in their fight against inefficient, and costly, regulations.

At the annual conference of trout farmers in the United States in Seattle, WA on Thursday, results of a major survey that measured the farm-level costs of regulations were unveiled. This gives regulatory agencies, policy makers and the trout industry itself a clearer picture of the costs of regulatory compliance.

“We’re finally getting some numbers on this beast that we have complained about,” Paul Zajicek, executive director of the National Aquaculture Association (NAA), told participants at the United States Trout Farmers Association (USTFA) Fall Conference.

“These numbers are about to really show the difference. These are the facts we need to change how farms are treated in the United States,” Zajicek said.

The survey showed that annual regulatory costs per farm averaged $150,506 and $1.23 per pound, and the total national on-farm regulatory cost burden was $16.1 million per year. Funded by the Western Regional Aquaculture Center (WRAC), the survey was conducted in 2017-2018 among salmonid producers of all sizes in the 17 top-producing states. It received a response rate of 63 percent, capturing 94 percent of national production.

Small farmers are hurt by the costs the most, around 16 to 18 times more than large farms, according to University of Idaho extension educator and study team member Gary Fornshell.

He said increased on-farm costs, and lost farm revenue—whether it was from lost markets, reduced production or foregone sales from regulatory barriers—are the two major economic impacts of the regulations.

New video to spread message
John Mollison, VP of Communications at animal health and nutrition specialist Prairie AquaTech, said he was “astounded” when he learned that “$1.23 per pound is assessed on every bit of fish” that trout farmers raised. “When I would tell other people about this, they would say, ‘Really? That doesn’t sound fair.’”

Mollison launched at the conference the world premier of “Encouraging American Aquaculture,” a video produced by Prairie AquaTech. The video communicates the importance of aquaculture and how regulatory costs affect fish farmers and, by extension, American consumers.

“The video was created for each of you to use,” Mollison told conference attendees. “Just convey the facts; the facts are enough to speak for themselves.”

Historic burden
The farmed trout industry has long maintained that proper oversight of the industry is necessary, but inefficient regulations drive costs up and keep growth down.

Respondents reported that the most problematic regulations were those associated with fish health certificates for interstate transport; EPA discharge permits; USFDA Veterinary Feed Directive; transportation; the Lacey Act and bird depredation permits both enforced by the US Fish and Wildlife Service; county and local regulations; water access; federal regulations; and employment-related regulations.

“What was key is that these regulations function mostly as fixed costs. So a small producer that was prevented from increasing production is caught between a rock and a hard place because he couldn’t expand his production to cover those increased fixed costs,” Fornshell said.

Katie Mackey Harris, who was elected USTFA president on Thursday, said the survey results are a “great tool” but “it’s just one tool and we need a whole toolbox.”

Harris noted that regulatory costs have long been a burden for US trout farmers. Her father, Phil Mackey, fought the same fight during his tenure as USTFA president from 1983-84, she said. “It was regulations back then; those were the fights they were fighting then as well.”

“I’m really proud of the contributions that we made to help that along,” she added. “It’s a great step but it’s all so new so I’m cautiously optimistic.”

The association is encouraging its members and member associations to share and post the survey results on social media to inform national, state and local decision-makers and agencies.

Impacts so far
The NAA has already used the findings to request the EPA to reduce testing frequency for effluent discharge, said Zajicek, adding that NAA has been arguing about reducing frequency of testing since its founding in 1991.

He said NAA has also used the data in voicing aquaculture’s concerns at its “Walk on the Hill” meeting with House and Senate officials.

Other aquaculture sectors across the US have seen value in the trout industry survey that five sectors—East Coast shellfish, catfish, tilapia, hybrid striped bass and Florida tropicals—now want to have an analysis done on their particular species, said Fornshell. Carole Engle, who led the study team in the farmed trout industry survey, Fornshell and Jonathan van Senten, will also conduct the new studies.