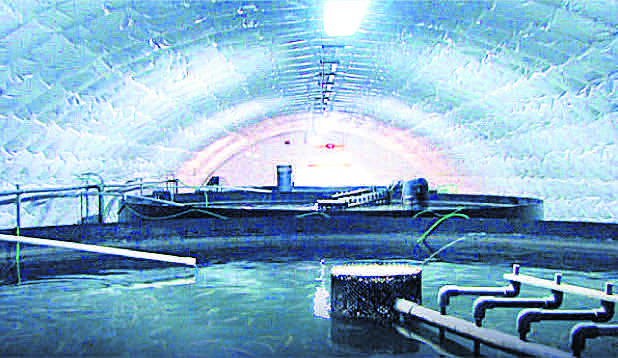 Nova Scotia’s Sustainable Fish Farming Canada put in a lot of hard work to get to this point. After almost a decade of research, planning, development, and perfecting their technique, after the breakthroughs and the setbacks, the company finally brought their first product to market recently: Sustainable Blue Atlantic Salmon.

“The origins of the company go back to the UK with my colleague, [Sustainable Fish Farming President] Dr. Jeremy Lee,” says CEO Kirk Havercroft. “Through his own research and development and commercial work, he has come to the point technically where he has designed a proprietary solution for saltwater closed containment recirculation aquaculture.”

While much of the groundwork was laid in the UK, the company established themselves in Canada in 2007. What followed were several years of construction and project development. Over that time they perfected their proprietary technique – a technique which remains a closely guarded secret.

“What I can tell you is that it’s based on a fundamental understanding of the water chemistry problems which are associated with this kind of production facility,” says Havercroft. “Jeremy based his early research on chemistry and science rather than on the engineering of what equipment might be available in the industry, for example, to remove solids out of the water. He realized there were some very unique problems that had never been addressed when it comes to closed containment aquaculture.”

Having identified these problems, Lee could find no solutions in the market place. So, he turned his focus to designing and building the equipment necessary to achieve the processes he identified as being essential.

“Really, all we have done over the past 10 years is refine those designs and refine the process,” says Havercroft. “Although I obviously can’t say anything about the solution itself, what it looks like or what those processes are, I think it’s unique in its origin and the fact that it was built from a fundamental understanding of the chemistry.”

The company’s Nova Scotia home base is appropriate – though Nova Scotia has a long history of fish farming, the provincial government are currently in the process of implementing new regulations for coastal aquaculture in response to pressure from groups representing coastal communities and other environmental groups. In this environment, a land-based, closed-circulating system should be particularly appealing, which Havercroft acknowledges.

Production was set back significantly in March of 2014 when the company suffered a malfunction which cost them an entire crop of mature salmon. The system which held the farm computer failed, followed almost immediately by a main power failure.

“The chances of that happening were extremely slim,” says Havercroft. “So slim, in fact, that we hadn’t identified that as a threat. The farm computer had gone down as the power went out. Without back up support for the farm computer, there were no alarms even though the emergency generator kicked in.”

After all the hard work and setbacks, Sustainable Blue’s first batch is now in the market place. Now, as Havercroft says, they need to focus on their growth and keeping costs under control. But the results, early though they may be, are very encouraging.

“Everything that we’ve seen so far supports our analysis that this is, in fact, commercially viable with the right technology,” says Havercroft. “And not just viable, but attractive. Just a few weeks that we’ve been in the market with this product, we’ve become more and more encouraged that the demand is there.”