Sustainability, seen as a differentiator of the American aquaculture industry, must be leveraged, says the National Aquaculture Association 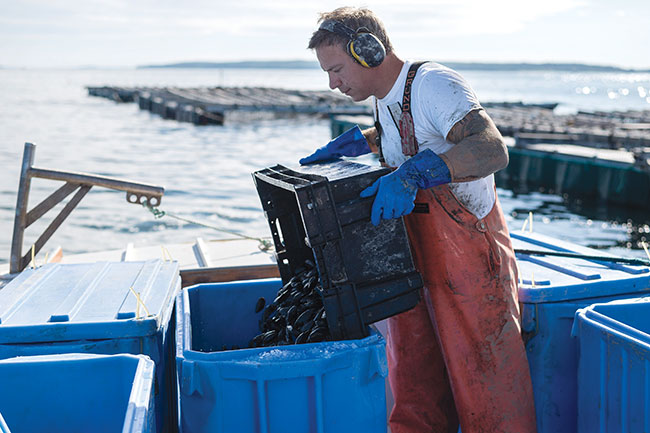 Critical training programs tailored for the next generation of aquaculture producers are among the routes NAA cited to sustain the industry’s growth Photo: Bangs Island Mussels

The continued growth of the United States’ aquaculture industry relies on improving access to foreign markets through trade and policy negotiation, resolving technical barriers to the US seafood exports, and supporting fair market access for US seafood products, says the National Aquaculture Association (NAA).

NAA president and Cooke Aquaculture Pacific general manager Jim Parsons emphasized the need to take action, citing that an estimated 80 to 90 percent of the seafood being consumed in the US is imported. “We have a seafood deficit of over $16 billion in the US. Change is clearly needed,” Parsons said.

He noted that despite the steady growth in total aquaculture sales over the past two decades, at an estimated rate of three percent per annum, there were some anomalies affecting the sector’s overall performance.  He observed for instance that as sales of sport fish and shellfish continue to grow overtime, the sales of catfish are declining after a period of sustained growth from 2014 to 2019.

COVID-19 triggered massive layoffs in rural areas hit hard  by the virus. On top of these challenges, the presence of foreign players in the seafood sector makes it harder for local farmers to thrive.

The Executive Order signed in May 2020 seeking to promote American seafood competitiveness and economic growth is foreseen to benefit the aquaculture sector. The EO’s major goal is to remove unnecessary regulatory barriers that stifle the growth of aquaculture. The directive underscored the need to subject imported domestic seafood to the same food safety requirements of domestically produced products both caught and farmed. The government also recognized the importance of establishing a seafood trade task force to look at seafood trade strategies.

Sustainability, seen as a differentiator of the American aquaculture industry, must be leveraged, the association suggested. In response to the growing demands from the American public, a variety of third-party certifications have been developed over the last two decades ensuring compliance with all applicable laws on animal welfare, community involvement, workforce and occupational health and safety issues, environmental and ecological care and social practices. NAA also suggested critical training programs tailored for the next generation of aquaculture producers, including farmers and their employees.

NAA believes promoting aquaculture development must be science-forward, and that agencies must join fish farmers and organizations in defending what sets the industry apart.

Any identified areas of opportunity must accompany long-term commitments and the types of farming utilized must be consistent and transparent.  NAA said producers with the right to operate in identified areas must be upheld by an ironclad security of tenure. This will ensure the sector will be able to consistently develop marine farms beyond demonstration levels.  Investment and tax incentive will also boost investor confidence, NAA suggested.

Jim Parsons spoke at the webinar titled:
“US Aquaculture: Economic Recovery Through Aquaculture” hosted by the US Aquaculture Society in October.