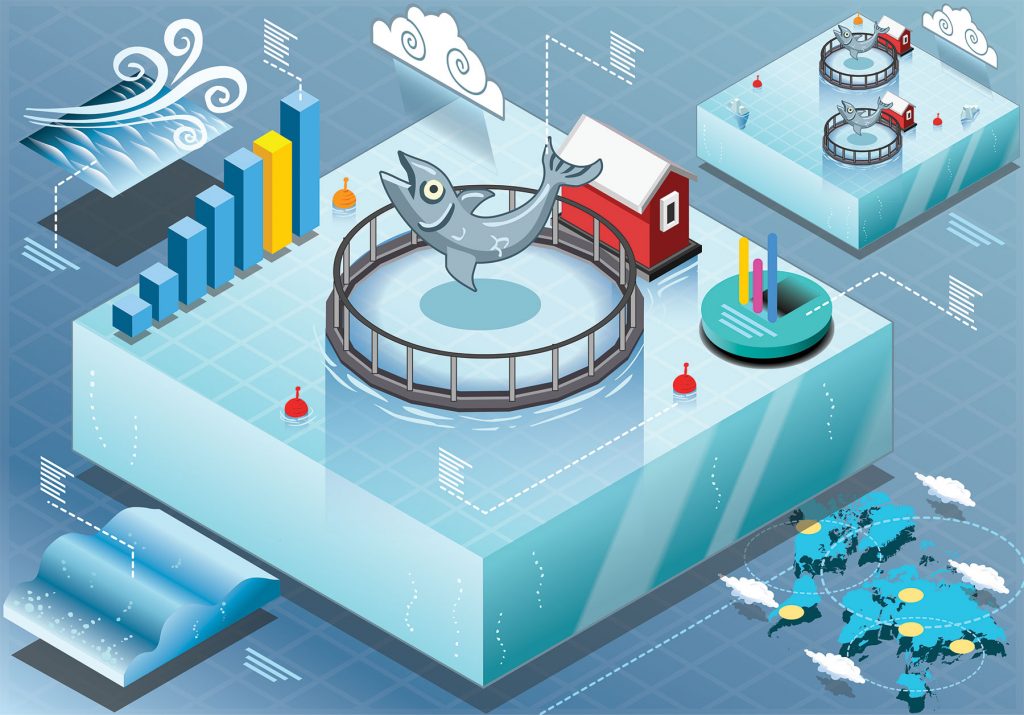 All too often, companies implement new technology but use only a fraction of what the software system or hardware is capable of doing – that is, until necessity strikes and unveils a solution for a new way of doing things.

When COVID-19 hit, Grieg Seafood in Campbell River, British Columbia, was looking for a way to limit staff interaction with the feeding systems at its salmon farms. They realized they could reduce the number of people required at the feeding stations by using technology already in place.

“The cameras on all of the salmon farms feed wireless information back to a hub and because of that we were able to lock down the farms into hubs, which meant one person at one station could feed three farms in the area just from one location,” says Dean Trethewey, seawater production director with Grieg Seafood BC. “That meant we didn’t need a lot of staff crossing back and forth. We always had it, but because of COVID, we ended up implementing it.”

In the last several years, fish farmers have been discovering technology that help reduce so many ongoing risks that affect the industry. From feeding to disease mitigation and monitoring of overall ocean conditions, facilities are using tools that can streamline production, optimize fish health and predict where problems may arise. Often, they also discover problems they didn’t even know they had.

“Someone once said: ‘We didn’t have an oxygen problem until we bought an oxygen meter’ — unless you measure it, how would you know it’s even happening?” says Trethewey. “We can see when there’s a spike in aluminum to the point where we’ve had some levels of mortality at our farms. We’re far enough out of the estuaries that if that’s the case that far out in the ocean, what’s happening to the wild fish in the estuaries?”

Grieg has partnered with ocean analytics and forecasting company Scoot Science to better understand the data they have been collecting but not dealing with for some time now.

“Farmers in every location take water quality samples, and we train them on what to look at with different species of plankton and all the monitors in pens and ambient ocean. We continually measure oxygen and temperature, and it’s a lot of information, but what do you do with it all?” says Trethewey.

Each site collects about 1.5 million data points a day. When the environmental conditions change, it’s typical for oxygen levels to change. Understanding these trends and cycles means the farmers can see the need to turn on mitigation systems to get water moving to the fish in the pens.

“The earlier we can predict these events, the more time the farmers have to adjust for the changing conditions and prevent mortality. Some of the events can cause a loss, especially if it is plankton related. There are 13 species of plankton that when it shows up, there can be an issue if we don’t turn on the mitigation systems,” he says.

Grieg worked with Scoot Science to build a data collection platform on a machine learning system that starts to aggregate the data and provide a trendline of what the projection will be in three to five days.

“That’s the first time anyone has been able to do that in the ocean,” he says. “The way our sites are situated up and down the coast gives us a lot of data points to pull all of this together. When we start looking at it and the longer trend lines, it allows us to manage where we might want to move our production to have optimal farming on the coast.” 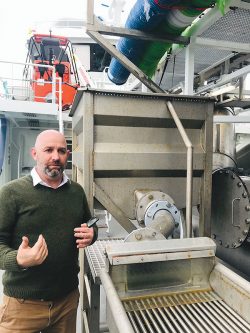 Applications of AI
At Atlantic Sapphire, the salmon company is working with artificial intelligence to improve operations. Still, the gains have been most prevalent on feeding, says Thue Holm, chief technology officer of the land-based “Bluehouse” in Miami, Florida.

“We use AI in many things like maintenance, studying fish behaviour, and controlling water parameters and other processes within the farms,” he says.

Other drivers of technology adoption, says Holm, include the cost of transportation to market and high production costs in net-pen farming. While improvements are gradual, Holm says he has seen “constant improvements” across all areas of operations with the implementation of technology.

“For our company, innovative aquaculture and cutting-edge technology result in a bio-secure environment, ideal for each stage of Bluehouse salmon growth,” he says. “With 80 percent of the seafood in the United States imported, technology enables us to bridge the gap between increased demand and limited supply, pioneering Bluehouse salmon farming locally and transforming protein production globally.”

“I think it’s a suite of necessary technologies, particularly for fish breeding. We don’t know much about the best protocols for spawning and breeding young animals, and sometimes the overall efficiency of the value chain is hampered by the breeding at the hatchery. In general, I would say the traditional focus on health, nutrition and genetics in production systems is the right way of looking at it,” he says.

To scale up production sustainably, he says it is important that there is a suite of nutritional technologies that allow feed mills to replace fish meal, whether partially or wholly in their diet, without compromising the farms’ production performance.

Gomes says there has been more focus in the last two decades on automatic monitoring and data collection and the derivatives that may follow. That could include aerators that turn on by themselves, programmable feeders that reduce manual labour cost and human error, and integrated data collection systems that feed into the other innovations, including specific IT solutions for farmers.

“There are a series of innovations and technologies required downstream for farming and the ability to automate and increase processing yield in plants, which has a direct impact on how much the market can pay for the whole fish produced by the farmer,” says Gomes. “It has a very material effect on the bottom line of a farming operation.”

He also points to the need for technology in providing traceability on the product, ensuring the product complies with certain expectations and therefore justifying a certain premium.

“That is also in development and will have a material impact on the farms,” he says. 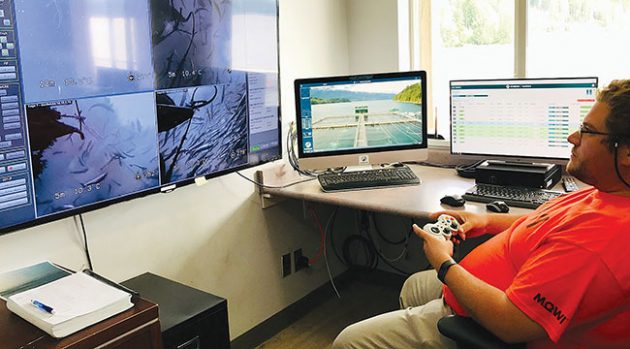 Hurdles to enabling tech innovations
“The biggest impediment to taking full advantage of available technology in some jurisdictions is the lack of broadband services to areas where fish farmers operate,” says Mark Lane, executive director of the Newfoundland Aquaculture Industry Association.

“As a highly innovative and technologically advanced industry, this announcement is certainly welcome. With full connectivity, the ocean of opportunities is endless,” says Lane.

Impact on jobs
Historically, putting automation tools in place inevitably displaces workers. Holm of Atlantic Sapphire says many processes and operations will be automated in the future to reduce cost and remove the human factor.

As technology continues to advance, so too will the responsibilities of the workforce in fish farming, says Lane. He points to the role of an aquaculture technician in salmon farming.

“Where once fish were fed exclusively by hand on sea sites, they now use technology to feed remotely from land,” he says.

But Trethewey argues that while technology may eliminate certain jobs, other roles will emerge to manage all incoming data produced by systems implemented.

“It always seems when you implement something like this, a new position is created somewhere,” he says. “We continue to do more and are not looking at replacing any labour on the farms — we run a pretty streamlined operation. It is typical to have about five employees on one farm, and this allows them to put a better focus on the fish. Much of it was labour-intensive before – writing down information on paper – this is automating that process.”

One of the new positions on a farm could entail monitoring the underwater cameras when feeding the fish.

“One of the technologies we have trialled is a program that can detect feed pellets on the monitor and capture the pellets and adjust the feeding system according to the fish’s response or appetite level,” says Trethewey.

“We’ve been very vocal with the companies we work with about having open API source, so it allows this computer pellet monitoring system to talk to our environmental monitoring system. What we’ll see is when the parameters are changing — if oxygen levels are declining and you see an appetite decrease, then you see what drives salmon behaviour.”