Features Nutrition
Taking the ‘ew!’ out of seaweed, one dish at a time

Slimy and sometimes smelly seaweed is not stuff most consumers dream of eating and Steve Backman of Magellan Aqua Farms gets that. So he plans to win North American taste buds over to this nutritious yet misunderstood crop one dish at a time. 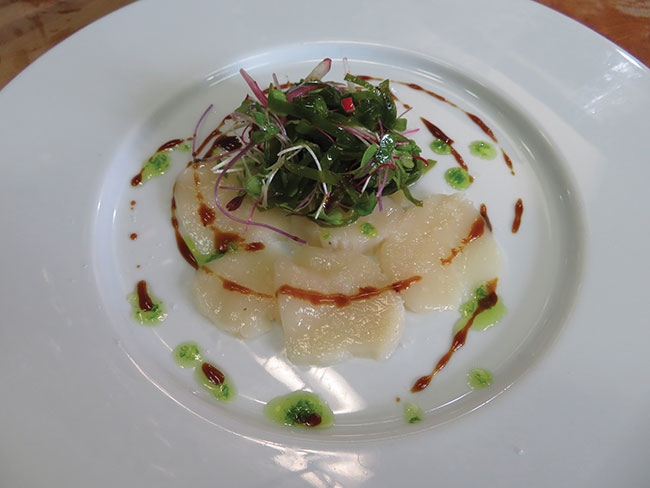 Backman farms scallops, sugar kelp and sea lettuce in New Brunswick’s Passamaquoddy Bay. The farm started out farming just scallops but bio-fouling on the shellfish led him to add sea urchins to the mix. “The urchins actually helped keep the cages clean. They were like little ‘scrubbing bubbles,’ and that was our first foray into IMTA,” says Backman.

The farm’s progression to integrated multi-trophic aquaculture (IMTA) led  to conversations with Backman’s longtime friend, Dr Thierry Chopin, an IMTA advocate with the University of New Brunswick and founder of Chopin Coastal Health Solutions. Previous IMTA efforts had largely focused on fish farms. In their first year working together, they were mostly exploring kelp’s suitability to the site. The second year was spent finding the optimum depths for growing. Now, on their third year, they’re ready to expand.

“We’ve been putting in more lines,” says Chopin. “It is growing gradually, but that’s the right approach. Rather than saying, ‘oh yeah, let’s put in some lines.’ We experimented and we’re scaling up.”

“We are using the existing scallop lines so the scallops are growing below the kelp, and the buoys that  mark the scallop lines actually become the attachment points for the sea vegetables,” says Backman. “We capitalized on the efficiency of the physical assets that are out there. We never had to add any new equipment or any new infrastructure to grow the kelp, we just incorporated it into the existing scallop long lines.”

A tough sell
Marketing this product can be a challenge in North America, where consumers may be predisposed to avoid kelp or sea lettuce due to unfamiliarity or previous bad experiences with dulse. A roundabout way may be the path to consumer acceptance, says Backman.

“The direction we’re headed in is to start introducing it as a raw ingredient in food preparation,” he says. “So pick a chef like Chris Aerni at the Rossmount Inn [in St. Andrews, NB], who has a really good sense of how flavors blend together and how textures work in a meal and how to make it look really, really attractive and you can start to take away that stigma of the salty dulse flavor and start to incorporate it as a nice accent to a meal.”

Chopin agrees. “You have to introduce it slowly in restaurants,” he says. “If you put seaweed salad on the menu as an appetizer, people will shy away. ‘What if I order this and I spend six to ten dollars and I don’t like it?’ But if you do it slowly, say, as vegetables on the side or in a sauce, pureed, it’s different. If you introduce it slowly, people will say, oh that’s interesting, I wasn’t expecting that.”

Chopin says the product is already being used to provide a salty sea flavor to both chocolates and herb-infused oils. He and Backman are also looking at promoting  kelp’s nutritional value because it is rich in minerals, iodine and soluble fiber.

Kelp also has a positive environmental impact;  as photosynthetic plants, they pull carbon dioxide out of the ocean. “We won’t be able to grow enough kelp to solve the ocean acidification problem,” says Backman. “But at least we can start slowing down the acidification of the local environment.”

Next step for Magellan Aqua Farm is to find ways to extend the shelf-life of the product. While some is sent fresh to restaurants in the region, including the Rossmount Inn, most of the product is dried and flaked. Chopin says they are also looking into designing a boat that’s ideal for harvesting seaweed and a dedicated drier. In the longer term, they plan to explore the use of kelp in cosmetic, nutraceutical and animal feed applications.