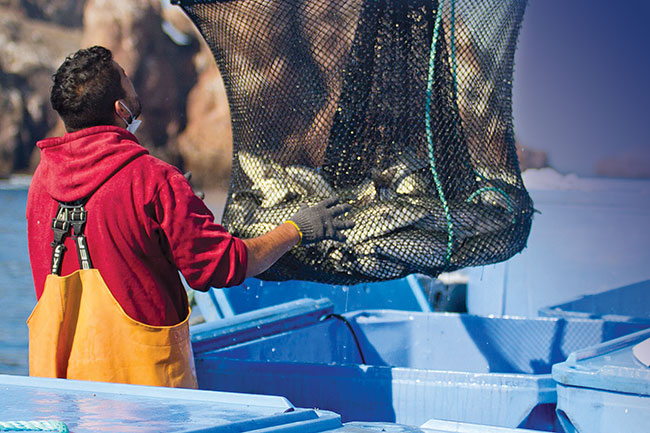 Pacifico Aquaculture was the first to bring farmed non-hybrid or “true” striped bass (Morone saxitallis)  to the market.

The company raises striped bass from egg to harvest in the deep waters off Baja California. Also known in the wild as rock fish or striper, the fish sports distinguishing black stripes running along its silvery metallic sides.

Starting out as a tuna ranching operation in the early 2000s, the company switched to farming non-hybrid striped bass in 2017, eventually making a name for itself as builder of the world’s first commercial striped bass hatchery.

“One of the biggest challenges we face is the fact that we are first to market with this species. This means we have to develop every process and system ourselves.  We are bringing a new species to market and have all the challenges that come with it. This is also what makes it such a rewarding and exciting work. We are solving and will continue to solve these challenges and develop this market and species,” says vice president of sales, Guy Lott.

The company has five- to 10-year-old broodstock that spawn throughout the year, ensuring regular supply of fingerlings and full traceability of its product. Fingerlings are transferred to the sea  after staying roughly 110 days post hatch in land-based tanks.

Long before “precision farming” trended up in aquaculture, the company has embraced technology to enhance operations.

“Every day, there is more and more technology out there, especially for RAS system, which is relatively new in the industry,” says Lott. “This technology helps alleviate a lot of the labor needed in day-to-day operations. But, more and more, we find integrated solutions that gives fish farmers real-time information that improves overall fish rearing.”

But as applications of automation and artificial intelligence in fish farming become wider, human insight will remain vital, says Lott. “Considering that farmers are working with live organisms, in the end, the fish will tell you what they need,” he says.The company plans to expand its nursery to increase capacity to 8 million fish/year as well as to delivering bigger fish – 80-100g – to sea. The new facility will be equipped with new technology, much more automated, ensuring better yields.

The US is Pacifico’s biggest market by far, but there are plans for market expansion in the coming years. Regular, fresh shipments to both Spain and the UK have started recently.