Alaska, the United States’ top producer of wild seafood, is just in its infancy when it comes to farming it. Current and prospective farmers are looking at the technology and equipment used in Maine, where farming of shellfish and seaweed have been a commercial success for years. 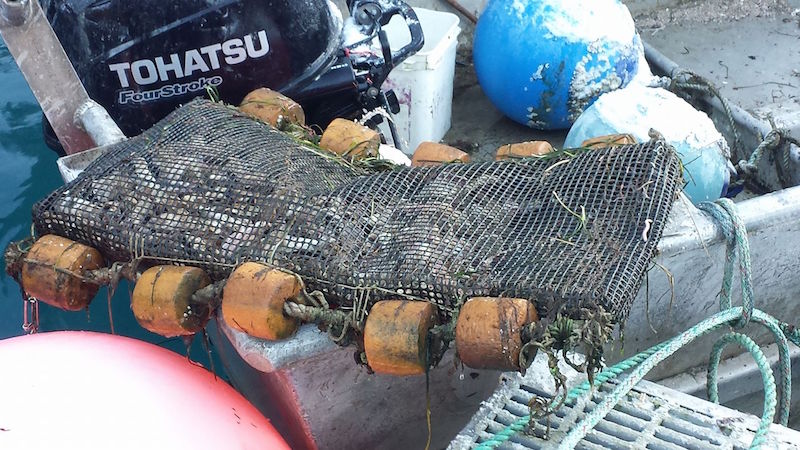 Farmers experiment with gear to enhance and diversify production

The Pacific Shellfish Institute (PSI) based in Washington State is helping to grow the Alaska shellfish and seaweed industries.

“The Pacific Shellfish Institute was involved in phase 1 of the Alaska Mariculture Initiative,” explains Julie Decker of the Alaska Fisheries Development Foundation.  “PSI felt that a good next step would be to help existing growers to become more profitable in what they are currently doing with oysters and help them diversify into different species.”

Mariculture in Alaska is considered to be producing only a fraction of its potential, with 95 percent of the $1-million industry coming from sales of Pacific oysters (Crassostrea gigas).  Blue mussels (Mytilus trossolus) and a small amount of seaweed are the other species currently being raised. The Alaska Mariculture Diversification Innovation and Technology Transfer project received Sea Grant funding to help expand the industry.  PSI is a collaborator and sub-contractor on this project.

The project has targeted current and prospective farmers through workshops and an Alaska Shellfish Growers conference in 2015 and 2016.  They have also coordinated the distribution of seaweed seed and cultivation materials and new oyster growout gear in exchange for growers testing the gear, keeping records and sharing their results.

PSI provides technical assistance and advice on best culture practices of oyster and kelp species, and works to connect Alaska with specialists on the East coast.

“The growing conditions in Maine and Alaska are quite similar,” explains PSI Executive Director Bobbi Hudson, from her office in Olympia, Washington.  “Maine has deep rocky shorelines with big tides.  Neither area is suitable for beach culture.  And Maine is really expanding their seaweed industry.”

Traditionally, Alaska oyster growers have used lantern nets, says Hudson.  “But they are difficult to work with and are labor-intensive.  A lot of growers have switched over to ‘Mexican style’ trays, hanging from buoys.”

Growers were interested in trying something else and they started looking out of state.  “Vexar bags seemed like something to try but they didn’t just want to go out and buy it themselves,” Hudson says.  “So this was an opportunity to access funding and try it out and experiment, at no cost to them.”

“We were able to purchase some Vexar bags, with the closed cell foam and the buoys already attached, from Maine.  Trucking across the country was cheap but barging it up to Alaska was not,” she adds.

Each grower in the program received 44 five-inch-deep Vexar boxes with foam floats, 44 three-inch-deep Vexar bags with floats, and 22 Seapa baskets.  “We didn’t get the gear distributed until mid summer last year,” says Hudson.  “Some got in the water, some not.”

“We do have some lessons learned already,” says Hudson.  “One site in the Ketchikan area where they deployed floating Vexar bags found the wind and the waves just too much for it. They had a lot of their gear break apart. It won’t work at his site.”

“But the same bags work really well in Jakolof Bay up in the Homer area,” says Hudson. “There is not as much of a fetch towards the corner of the bay that a farmer is working in and the floating bags are working beautifully.”

Hudson says they were concerned about local sea otters chewing the floats.  “It’s not something they have to deal with in the north east but so far it has not been a problem,” she says.

“The Seapa baskets are suspended just below the water and they work great,” adds Hudson.  “I know the folks who have been working with them are pleased.  They are easy to handle, open and dump, and easy to monitor growth.”