Texas could be farming oysters sooner than expected 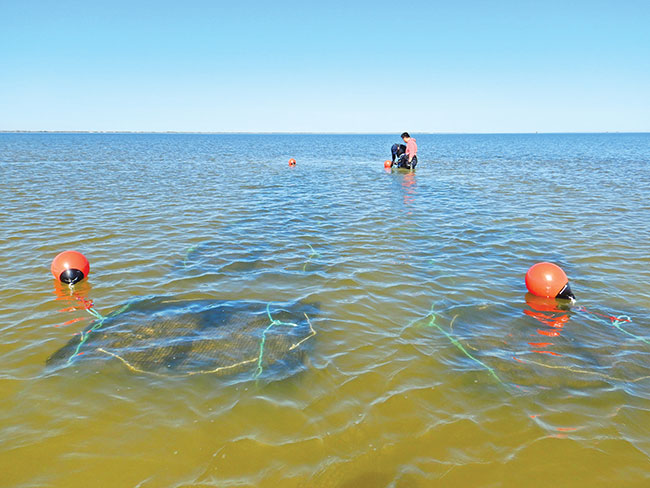 Texas’ first-ever commercial oyster farmers may well have gear in the water by late 2020, according to Texas Parks and Wildlife Department (TPWD).

The Austin-based agency is carrying out the mandate of a law enacted September 1 authorizing off-bottom oyster mariculture. “Though the legislation stipulated that rules must be in place by September 1, 2020, we hope to have everything completed so that interested individuals can begin the application process in late spring or early summer 2020,” says Lance Robinson, coordinator of the agency’s effort to draft rules governing the state’s new aquaculture program.

The 25-year TPWD veteran’s optimism reflects the extensive legwork that began about a year ago in anticipation of the new legislation. Teams reached out to every state in the US with a shellfish aquaculture program, as well as maritime provinces of Canada, Australia, New Zealand, and some European Union countries.

“We have a lot more legwork to do, but right now we are on schedule to provide an official proposal to the Parks and Wildlife Commission in January,” Robinson says. That will be followed by a period of public comment, then final action by the commission in March.

The launch of the oyster mariculture program in Texas comes after a steep decline in the wild oyster harvest—some 43 percent since 2000, according to the National Oceanic and Atmospheric Administration (NOAA)—due to both natural disasters and bay closures resulting from destructive fishing practices.

A key hurdle the TPWD faces now is identifying the locations of the aquaculture zones. A site planning team is using a marine spatial planning tool to exclude areas with oil and gas pipelines, sea grass beds, natural oyster reefs, and bird rookery islands. The commission is also making note of recreational sailing and fishing areas.

“We are going to have conflict,” notes Robinson. “But the goal is to try to get as much information on the front end to help guide this process so that when we come out on the other side, we have a program that is close to operational, with minimal problems.”

To extract fair market value for the use of public resources, the TPWD is also grappling with pricing oyster leases: flat fee or via bidding? Various constituencies, including potential growers, have weighed in; Robinson is looking forward to input from the commission itself in November.

Right now, no hatcheries operate in Texas—another obstacle (see ANA Sept/Oct 2019, page 6). However, Robinson points to several hatcheries along the Gulf Coast, even some on the East Coast. “The challenge we face in Texas is that there are genetic differences in the oysters within the state,” he says. “Biosecurity of brood stock is going to be major.”

Robinson anticipates being able to work through some other minor administrative tangles unique to Texas. For example, one statute requires a discharge permit from an operation with “contained animals.” “It has nothing to do with oysters,” he says, “I think it references feedlot operations for livestock and cattle.”