The Pretzer family farm goes back to the 1940s, producing crops and livestock in the community of Diller, Nebraska. But a little over a year ago, Scott Pretzer decided a disused pig barn was an ideal site for his Pacific white shrimp project. Today, Rock Creek Shrimp stands as a unique producer in a state better known for corn, beef or wheat. 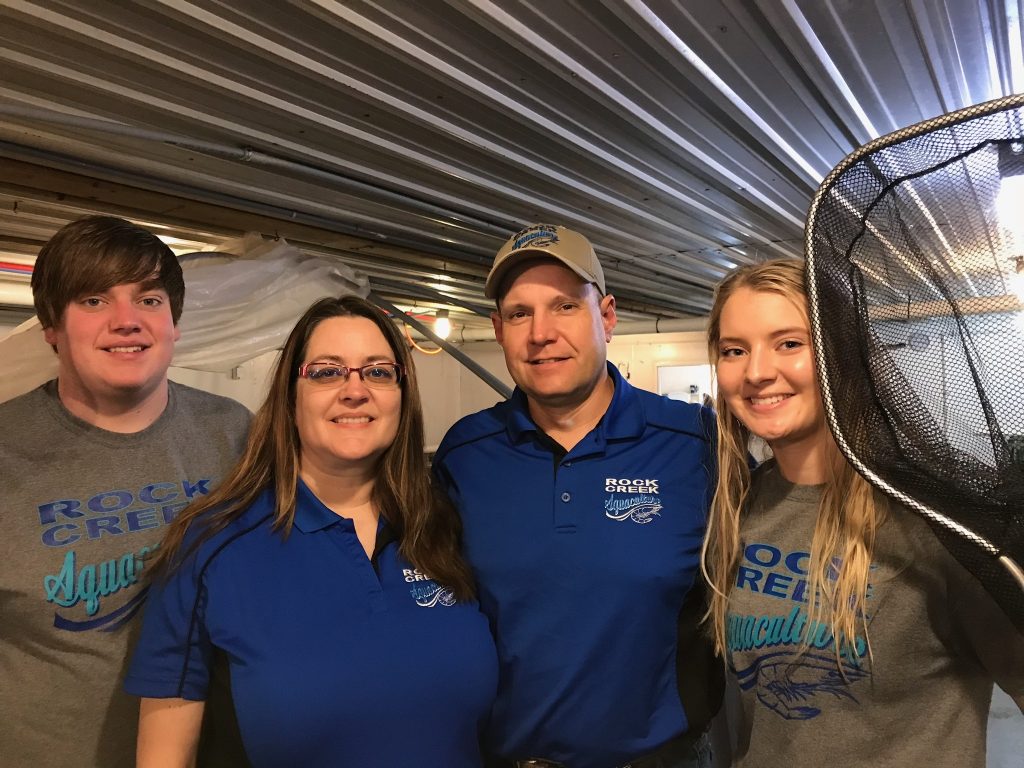 “It’s an aboveground tank system in our building,” says Pretzer. “So it’s all indoors, we recirculate all the water, and do it antibiotic-free. It’s environmentally friendly with minimal environmental footprint because we don’t discharge anything into the environment. We can grow them antibiotic-free, and all the water is recycled in this system. We liked that aspect. We love the product we’re raising, but we also really like the way it’s raised.”

Sustainability is a key factor for Pretzer. He says that one must be wise in utilizing land and resources, and he believes aquaculture is a perfect extension of agriculture. But it has been a learning process. While operating under many of the same basic principles as agriculture, aquaculture is an entirely different beast.

“It’s a lot of little things,” says Pretzer. “We learn something every day – whether we learn by doing it right, or we learn it when something doesn’t go as well as we planned. A lot of specifics have to do with water quality. If you see a certain reading, what are you going to do to counter act that, or make it better? It’s a lot of learning as we go.”

Rock Creek Shrimp’s operation takes place in eight vinyl aboveground swimming pools, with a PVC pipe framework holding a tarp in place to contain the shrimp. The shrimp are flown in from a hatchery in Florida in batches of 33,000. They a fed a specialized antibiotic-free feed, which includes soybean plant protein. When ready to harvest, the shrimp are humanely killed in ice water, and packed with ice to keep them fresh.

Pretzer’s grandfather started the hog farm after World War II, and his (Scott’s) father, Verne, started working it in the 1970s. While technically retired, Verne still helps out on the farm every day, and was in fact the one to suggest looking into shrimp farming. Today, Pretzer’s children, Reid and Skylar, also work on the farm, becoming the sixth generation of the family to work in farming.

“We’re just a true family operation,” says Pretzer. “We’re on the family farm and our kids are involved. Our parents and our in-laws are involved, and we’re proud of that aspect of it.

While there have been other efforts to farm crustaceans in converted hog barns in the past, none were successful enough to truly make an impact in the state. Rock Creek Shrimp thus feels like a new approach and a new product to the customers.

Looking to the future, Pretzer says that he’s interested in using the experience they’ve obtained to expand into different types of aquatic livestock. He is researching other options, as there is more space to expand at their facility.

“We are still in the growing phase of shrimp and we want to get that just right before we move onto something else,” says Pretzer. “But we have the site, and that’s what’s really nice about it. We have the site ready when we want to expand. If we do something like tilapia or yellow perch, that’s the way we plan to do it.”

Pretzer is also interested in exploring the use of other techniques, such as aquaponics, but is emphatic that he doesn’t want to rush into anything until the conditions are just right.

“That’s part of the reason why we’re not doing it right away. I know it involves a substantial cost — aquaponics — so if we do it, we want to do it right from the start.”