News
The Lacey Act, Injurious Wildlife, and the Intent of Congress 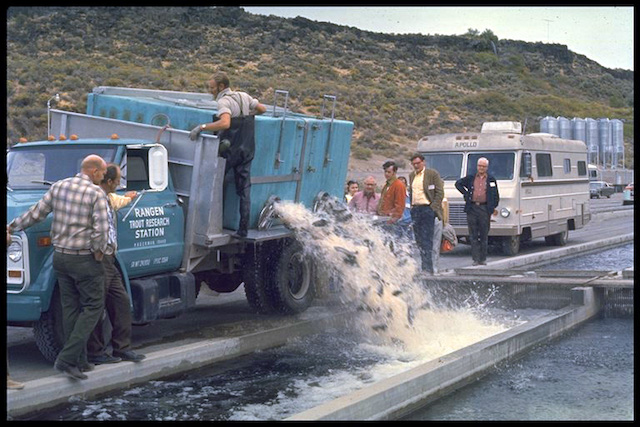 The basic purposes of the Lacey Act to supplement and bolster State laws and regulations are not affected by the Court of Appeals decision. The intent of Congress stated in 1960 reaffirmed its position that interstate commerce of species listed as “injurious” was not regulated under the Lacey Act. The injurious species provisions of the Lacey Act apply only to foreign species. However, based on my experiences, I will be surprised if there is not further litigation over definitions of “foreign species” that are already present in the United States.The Lacey Act, Injurious Wildlife, and the Intent of Congress

A decision by the Court of Appeals for the District of Columbia in early April this year appears to have brought partial clarification to some of the long-standing arguments between American fish farmers and the US Fish and Wildlife Service (USFWS). Has it, or is there more to come? The long and complex history of the Lacey Act indicates that resolution will not come easily and Congress has shown little interest in clarifying or modifying the intent of by-gone legislators.

Twenty-five years ago the Department of the Interior attorney chastised me when I suggested that the full meaning of a new regulation (not Lacey Act) would not be known until a substantial volume of case law dealing with the regulation was determined by court decisions. I laughed in response, inasmuch as I considered it to quite an honor to be called “cynical” by a “DC lawyer.”

American fish farmers and the USFWS have engaged in longstanding arguments about the full meaning of the Lacey Act on an array of matters pertaining to aquaculture. Considering the fact that the Lacey Act was passed initially in 1900, it becomes obvious that judicial clarifications can be a very slow process.

The initial intent of Congress with respect to the Lacey Act had nothing to do with aquaculture, or even fish. The original intent of the Lacey Act was to supplement and bolster state laws for the protection of “game and birds.” Transporting illegally taken game or birds from one state or territory to another was the focus of the Act. Such illegal transport was elevated to a federal violation, possibly a felony, if the value exceeded a prescribed amount. The Black Bass Act (1926) added similar protections for fish.

Serious disagreements between the USFWS and American fish farmers started to develop in the 1970s as commercial production of channel catfish and several species of bait fish expanded rapidly. Enactment of the Endangered Species Act and amendments to the Lacey Act introduced additional factors, but nothing in the legislation or the accompanying “report language” suggested that Congress was terribly concerned about the potential effects of non-indigenous species and/or injurious species on endangered species, or native species in general. However, the belief-driven philosophies of environmentalists within the USFWS promoted a culture in which non-indigenous and/or injurious wildlife were matters of great concern and had to be tightly controlled.

USFWS and environmental colleagues attempted to promote a “clean list versus dirty list” approach to injurious wildlife law in the early 1970s. proposed regulations would have barred importation of any wildlife or fish not listed as approved (aka, the clean list). Congress, due largely to opposition from the pet industry, aquarium enthusiasts, and fish hobbyists, rejected the “clean list” approach; preferring to list only those species deemed to be “injurious.” question of whether or not injurious wildlife already present in the United States were to be banned from interstate commerce or transport was not addressed. absence of Congressional clarification left the door open for actions and interpretations that would impose the tightest controls possible.

When I arrived in the Washington, DC offices of the USFWS in 1985, the arguments were starting to simmer. My appointment as National Aquaculture Coordinator for the USFWS (and the Department of the Interior) in 1989 was driven in part by the USFWS Director John Turner’s desire to “Help Aquaculture Grow” by placing a scientist with aquaculture background in a liaison position. An “Aquaculture Summit” attended by fish farmers, fishery scientists and government officials provided lists of priorities for research and management strategies. The summit also confirmed the need to resolve issues related to the Lacey Act, the Migratory Bird Treaty Acts and government services, such as fish health inspections.

Even as progress on these issues was developing, the belief-driven attitudes of environmental managers dealing with non-indigenous species, endangered species, and the potential effects of rearing animals in captivity was becoming ever-more established in divisions other than the Division of Fish Hatcheries. Outright hostility to aquaculture was displayed occasionally. In my opinion, decisions based on personal beliefs, not evidence-supported science became more common. Given their mindsets that interpreted the Lacey Act as providing the USFWS with authority to regulate interstate movement of fish based on their injurious wildlife status was reasonable to these individuals. In their minds it was a logical extension of the Lacey Act. I resorted to keeping a copy of The Evolution of National Wildlife Law on my desk, so as to document my disagreements with them.

Although the decision by the Court of Appeals for the District of Columbia in April clearly limits the authority of the USFWS to regulate the interstate movement of animals deemed injurious by the USFWS, individual states retain the authority to ban species that the states consider injurious. The provisions of the Lacey Act that prosecutes violations of state laws and regulations in interstate commerce remain as powerful as ever. If a fish farmer in state “A” ships into state “B” a fish banned by state “B” for whatever reason, including classification as injurious, that farmer can be arrested and prosecuted under the Lacey Act.

The basic purposes of the Lacey Act to supplement and bolster state laws and regulations are not affected by the Court of Appeals decision. The intent of Congress stated in 1960 reaffirmed its position that interstate commerce of species listed as “injurious” was not regulated under the Lacey Act. The injurious species provisions of the Lacey Act apply only to foreign species. However, based on my experiences, I will be surprised if there is not further litigation over definitions of “foreign species” that are already present in the United States.