The power of aquaculture

A two-day conference on aquaculture, estuarine health and impacts of climate change was organized by the PEI Aquaculture Alliance and the PEI Watershed Alliance. 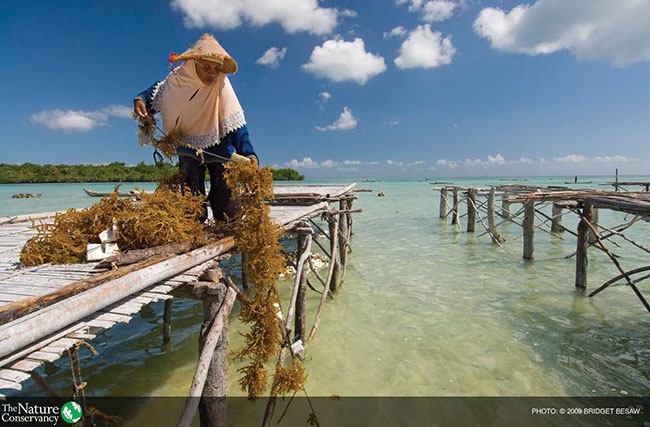 Here are some highlights.

Restorative aquaculture
Aquaculture’s potential to provide social, economic and environmental benefits should not be underestimated, according to Seth Theuerkauf of The Nature Conservancy Global Action Team.

Theuerkauf shared some of the successes that The Conservancy has achieved in using aquaculture to aid ecosystem recovery.

He said the organization operates in 72 countries around the world, where it is involved with both the restorative aquaculture, which harnesses the potential of aquaculture to bring dead or dying marine ecosystems back to life; and smart aquaculture, which is aimed at improving planning that will reduce the environmental footprint of new projects.

One area the organization is focusing on is a “dead zone” or hypoxic zone in the Gulf of Mexico. Hypoxia is caused by excessive nutrient pollution, often from human activities such as agriculture, that results in too little oxygen to support most marine life. In 2017, the dead zone reached a record length of over 8,500 square miles. The Conservancy is working with farmers, academia, governments, and the agriculture industry to revive the area by reducing the level of nutrient runoff. Part of that effort is encouraging the agriculture industry to adopt conservation practices like using cover crops, reduced tillage, crop rotation and nutrient management.

The Conservancy also has a project in Chesapeake Bay, one of the largest estuaries in the United States. The bay has experienced significant oyster losses over the past several years. The Conservatory is teaming up with the Virginia Institute of Marine Science and several oyster companies to see if using different growing techniques can improve the water quality. He said the results to date have been promising.

“Shellfish and seaweed farming is providing a valuable service to the ecosystem,” he explained, noting that aquaculture helps mitigate nitrate pollution.

With another three billion people expected to be inhabiting the planet by 2050, he said aquaculture has a huge potential to help feed the planet without increasing pressure on both terrestrial and marine habitats. “Aquaculture, done well, enhances food security, offers a huge potential not just for producing food for a growing planet but also to create employment,” he said.  He cautioned however that the industry could be held back from meeting its full potential by inadequate governance and insufficient infrastructure.

Harvest methods impact ‘cleaning power’ of bivalves
The role of bivalves in filtering waters in coastal and estuarial systems is well known but the harvesting methods shellfish farmers use could spell the difference in how much “cleaning power” they have, a biologist suggested.

Luc Cormier, aquaculture biologist with Fisheries and Oceans Canada studied the nitrogen-removal potential of both mussels and oysters in New Brunswick and PEI. While nutrient loading is a global problem, he said the situation is particularly challenging in the Maritimes. A high concentration of agriculture over a relatively small land mass has made the problem especially acute in PEI, Canada’s smallest province.

His research to date has shown that nitrogen-removal potential (NRP) was similar for the tissues of mussels and oysters on a per weight basis. But he noted that mussels have a higher percentage of nitrogen in their shells than oysters. If individual oysters were harvested at an even greater biomass than mussels, then the per-hectare NRP of oysters could potentially exceed that of mussels, he said.

His research, conducted jointly with Jeff Clements of the Norwegian University of Science and Technology, indicates shellfish harvesting has the capacity to remove an average of 99,088 kg of nitrogen annually from New Brunswick waters and 204,571 kg of nitrogen from PEI’s streams and estuaries.

Farmers, policy-makers view climate change differently
There is a gap between how farmers and marine planners approach the topic of climate change, a speaker told a seminar on estuarine environment health and shellfish aquaculture held in Charlottetown, Prince Edward Island (PEI) in March.

Laura Steeves conducted interviews with farmers, managers and researchers as part of her Masters in Marine Management thesis from Dalhousie University in Halifax. “Results suggest that there is a potential disconnect between the perceptions of managers and farmers, in terms of their understanding of the relationship between bivalve aquaculture and climate change,” she told the conference.

“Farmers tend to think in terms of more immediate concerns while managers tend to think more long term,” she said.  “The discourse between resource users and policy-makers is particularly important for the development of an industry in times of increasing uncertainty.”

Steeves also looked at models projecting the impact of rising sea surface temperatures and shellfish growth, particularly blue mussel and eastern oyster,  in coastal waters of Nova Scotia and PEI. She found a significant difference in how the two species were adapting to warming temperatures. “Generally speaking oysters are a more thermally tolerant species here than the mussels that we’re culturing,” she said.

She is predicting increased performance for oysters and a potential decline in mussel growth if the temperature increases beyond a level they are comfortable with. Steeves noted that the study area contains widely varying temperatures both seasonally and spatially. Colder waters in the Bay of Fundy reach an average summer high of 13°C, however water temperatures in the sheltered Northumberland Strait could exceed 20°C.