The world is their oyster

The shellfish industry in British Columbia has at least two very happy people this fall. Carl Butterworth is the manager of the Vancouver Island University’s (VIU’s) Deep Bay Marine Field Station and Dr. Tim Green is the new Canada research chair in Shellfish Health and Genomics at the Deep Bay station. 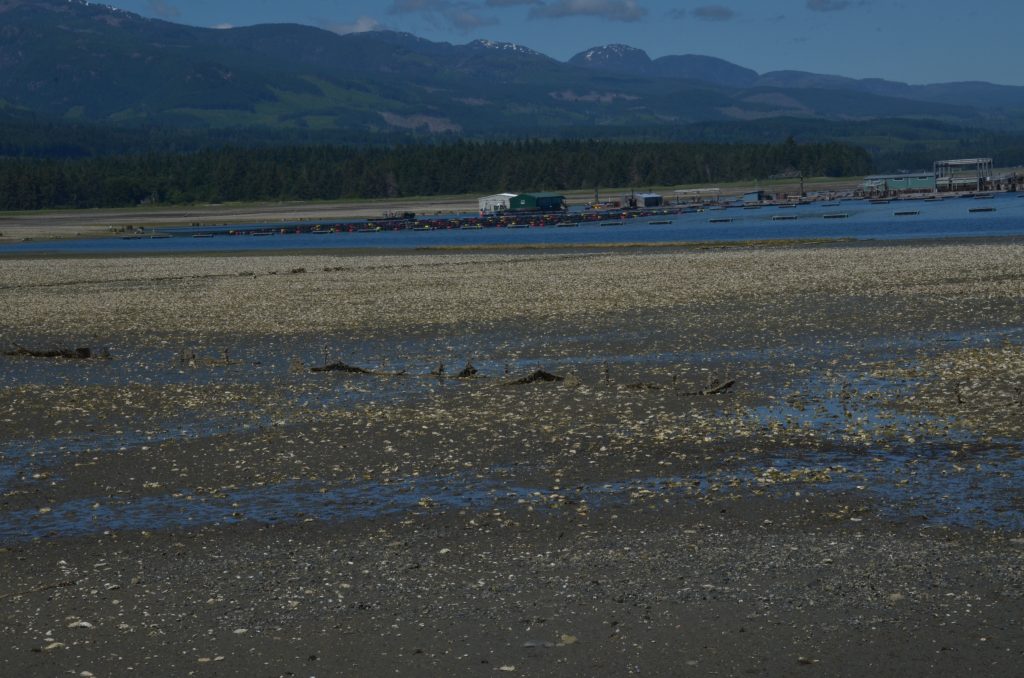 A commercial oyster farm just along the beach from the field station.

Butterworth has been part of a drive by VIU to build a Center for Shellfish Research to support the B.C., industry, to provide a teaching environment for aquaculture students and expand the station’s public education programs. “Of course we needed to have a researcher for the Research Center,” quips Butterworth. “Both VIU and the industry are very happy to get final approval to welcome Tim Green to our program.”

“He really has been everywhere they do any kind of oyster aquaculture,” says Butterworth, noting Green’s tenures in France and Australia as well as his work at the University of Washington, Rutgers University and the University of Queensland where he did his PhD.

Green is excited to be at the Deep Bay facility, something he says is unique in the industry. “We really have the ability to do egg to beach to plate here,” he points out. “We have the broodstock, hatchery and nursery facilities at the station. We have our own grow-out area, but we also have major industry players within meters of our beachfront. We attach all that to the university which allows us to work with aquaculture students, and we also have a commercial kitchen that will help us support culinary students learning to prepare shellfish.”

Public education is also important for the center both as a tourist destination and for public schools. “Some 300 members of the public come through Deep Bay every day in the summer to learn about shellfish farming,” says Green. “So when you put them all together I don’t think anywhere else in the world has that.”

“The industry has two priorities right now,” says Green. “We need access to a reliable supply of Canadian seed and secondly, we are really suffering from mortalities in the second summer.”

“We think that a breeding program that looks at domestication and the ability to culture animals in the hatchery, as well as research into mortalities is the direction we will head,” he adds.

Green will take the lead on the broodstock program that has been running at Deep Bay for a couple of years. “We will want to differentiate our breeding program from other west coast areas which may have concentrated more on yield,” says Green. “I would like to have a program based more on half shell characteristics. I see the future as the half shell market.”

Both Canadian and U.S., pacific coast hatcheries have been struggling to simply produce the required numbers of seed explains Green. “But some of these other countries have a fantastic price point,” he points out. “We simply could not pay a Canadian worker to produce seed for that price, so if we want to encourage farmers here in British Columbia to purchase domestically produced seed, then we need to offer something that performs better and that they are willing to pay more for.”

“If we could produce a seed that has twice the level of survivability, farmers are going to be willing to pay more for it,” says Green.

“We hope we will have a broodstock that we can supply to local hatcheries to allow them to produce hardier more resistant seed,” says Butterworth. “And on the farming side we are hoping to have a product that gets through to market with greater percentages.”

A commercial oyster farm just along the beach from the field station.

As a relatively small industry, shellfish growers in B.C., do not have extra money to fund research. “The gift from the industry to us is that whatever surplus seed we have from any of our research activities, they will allow us to sell that off to their members at above-market rates,” says Butterworth.

“Overall we want to work with the industry and develop an oyster that grows well here, to tune everything up,” says Green, while noting that the Baynes Sound area lying along the east coast of Vancouver Island presents some challenges. “We have some fairly harsh water chemistry for oyster farming,” he says. “Baynes Sound has a low natural Ph of 7.4 which is pretty acidic and we also have a fair amount of fresh water in-flow.”

“Priority one for my research grant is evolutionary adaptation in shellfish,” explains Green. “We will look at the ability of oysters to adapt to OA (ocean acidification).”

And that is only part of a complex puzzle that includes water temperature, and the presence of pathogens such as vibrio, he explains. “How do all these factors affect larval development and the physiology of the animals,” Green says, “and how do they contribute to summer mortality?”

“We are planning on using a family-based breeding program combined with experiments looking at whether we can change the epigenome of the oyster,” says Green. “We can expose them to high CO2, or challenge them with vibrio before spawning to see whether or not that improves the next generation’s response to these stresses.”

“We know the plasticity of the Pacific Oyster is huge,” Green adds. “Can you have a combination of genetic selection and these environmental stresses to get your shellfish to adapt?”

Keeping them alive
Green is known for his work on Pacific Oyster Mortality Syndrome (POMS) or the Ostreid herpes virus that has had a devastating effect on both the French and Australian oyster industries. But that won’t be the focus of his work in British Columbia.

“I don’t think anyone would be very excited if I said that I wanted to bring oyster herpes virus on to campus just to play with it,” says Green, only partially joking. “It’s on the other side of the world and hopefully it will stay there.”

“Herpes was the biggest problem at the time while I was in Australia. If you wanted to do oyster research that was what the industry really needed,” Green says. “In France and then in Australia – I was working to keep the oysters alive.”