To protect and save

Charting a future for salmon farming in B.C 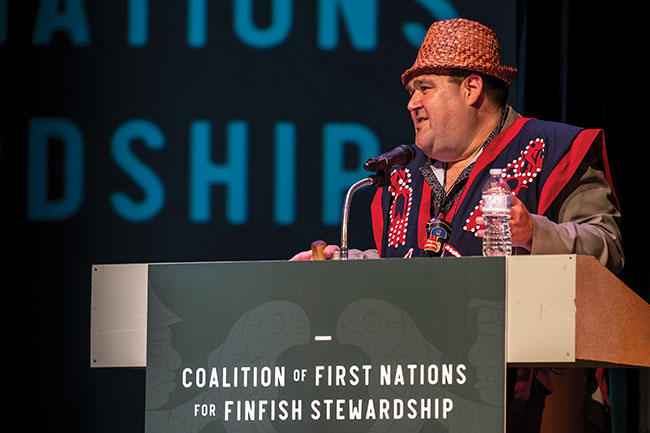 The future of salmon farming in British Columbia has never been more uncertain, as the province’s aquaculture community finds itself navigating some turbulent waters, pushed into the path of the federal government’s blue economy strategy.

At the centre of this shifting public policy paradigm is an 11-month consultation process initiated by Fisheries and Oceans Canada (DFO) with the end-goal of developing a transition plan that will phase out net-pen farms in favour of more sustainable alternatives.

The goal of the government’s net-pen transition plan: To “advance innovation and growth in sustainable aquaculture in British Columbia that progressively minimizes or eliminates interactions between salmon open-net pens and wild salmon while also taking into account social, cultural and economic objectives.”

This engagement process is an opportunity for communities that rely on this industry for their business and livelihood to have a say in shaping the future of salmon farming in the province and, by extension, their own futures. It is a tight timeline, they say, but it is a positive step forward and a far cry from where things were just less than two years ago, when then DFO Minister Bernadette Jordan abruptly announced the closure of salmon farms in the Discovery Islands near Campbell River, B.C.

That order was later overturned by a federal court ruling in May 2022, but it caused the culling of nearly a million juvenile salmon at Mowi Canada West’s Big Tree Creek Hatchery, the temporary closure of the company’s Dalrymple Hatchery and several job losses.

The struggle is unique to the West Coast province, where the federal government sets public policy on aquaculture operations. But it is a cautionary tale for its provincially regulated Atlantic Canada counterpart, whose future may yet be tied into a changing national public policy regime.

Economic impact
The developments in British Columbia and the direction the federal government is taking with regards to ocean farming may yet influence aquaculture operations throughout the country, says Tim Kennedy, president and CEO of the Canadian Aquaculture Industry Alliance, the national association representing seafood farmers in Canada.

“British Columbia’s seafood producers for instance, Grieg (Seafood BC) and Mowi (Canada) in particular, are on both coasts of Canada. Those companies see Canada as one investment destination; it’s not coastal for them. So inevitably, what the Government of Canada does, if they implement negative policies or regulatory frameworks, that’s going to have negative implications for the entire country,” said Kennedy.

Already, the effects of an uncertain regulatory framework, and an economy still reeling from the effects of a global pandemic, have put aquaculture at a disadvantage. Since 2019, when the federal government unveiled its blue economy strategy, investments in Canadian aquaculture have been “very poor,” Kennedy added.

Earlier this year, Mowi Canada West announced the closure of its fish processing plant in Surrey, B.C., calling the move a “direct result of the Liberal government’s decision” in December 2020 to cancel salmon farming licences in the Discovery Island.

“The government has not provided, even to now, a signal from the national level about a positive future for salmon farming, and broadly for aquaculture in general,” Kennedy said.

As the consultation process gets underway, B.C.’s salmon farmers are given licence to operate as usual for the next two years. It’s about four years short of what the producers would have wanted to match their salmon production cycle, but they are taking it, in the hopes that the consultation process for the proposed “new framework for sustainable aquaculture in British Columbia” will produce favourable and reasonable solutions.

“While elements of the proposed framework are challenging, given the ambitious timeline set out, we are encouraged that the federal government will rely on reconciliation and peer-reviewed science as a foundation for planning,” the BC Salmon Farmers Association (BCSFA) said in a statement.

Dallas Smith (third from right) and the Coalition of First Nations for Finfish Stewardship work to continue the dialogue with the federal government and other community leaders to help shape the future of salmon farming in First Nations territories.

Indigenous perspective
Many of the salmon farming operations in B.C.’s coastal waters are operating within First Nation territories. Although not all First Nations in B.C. are supportive of salmon farms, about 17 of them do have some formal agreements with salmon producers, generating an estimated $42 million in economic benefits and nearly 250 jobs within First Nation communities, totalling more than $12 million in wages per year, according to data from the Coalition of First Nations for Finfish Stewardship (FNFFS).

The FNFFS view salmon farming as a “path to self-determination and reconciliation,” and while they welcome the federal government’s public consultation, the coalition is aiming to develop an even more targeted dialogue.

“We’re going to ask for a more refined process with the actual Nations who have this industry and sector participating in their territories,” said Dallas Smith, spokesperson for FNFFS. “And we’ve gotten support from the provincial government to lead a process and they would play within our process. So it’s just a matter of getting the federal government to our table now.”

That separate consultation, Smith said, will seek to define what the transition means and explore available technologies that can limit wild salmon interactions with farmed salmon. Protecting wild salmon populations is crucial for First Nations communities.

“I think one thing that the general public doesn’t understand is that the 17 and some odd Nations that are involved in the industry right now have been working on this for a couple of years,” said Smith.

Protecting wild salmon does not have to preclude protecting the socio-economic opportunities for Indigenous communities, however.

“As long as we continue to protect wild salmon, we need to protect these opportunities because they’re a vast part of what builds our communities and keeps our kids healthy and all the other things general society sort of takes for granted.”

Smith acknowledges there isn’t a one-size-fits-all solution to protecting wild salmon, and that technology applications will vary from site to site, depending on regional conditions.

“So our consultation process wants to open the government’s eyes to the fact that there’s three or four different regions that need to approach this differently on the coast of British Columbia. But at the same time, they have to be backed up by credible science, they have to have traditional ecological knowledge, that’s First Nations knowledge, coming into the discussion,” Smith said.

The FNFFS is encouraged to see the government opening up to the idea that land-based farms are not the only solutions.

“It’s been comforting to see the minister (Joyce Murray) start to use language we’ve been using with her around transition towards greener technologies as opposed to on land,” said Smith.

Landing on technology
With British Columbia accounting for 64 per cent of the nation’s total aquaculture production, the stakes are high for the aquaculture community in Canada’s West Coast. For now, B.C.’s salmon farming community is determined to make the federal government take a more reasonable approach to the transition process, one that can achieve the government’s sustainability objectives without jeopardizing the livelihood of thousands. 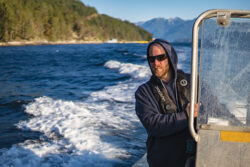 Technology and innovation will play a crucial role in shaping the future of salmon farming in B.C. And the land-based alternative the government seemed to have in mind when it set out to propose a transition from net-pen farming may not be realistic for the volume of Atlantic salmon produced in the province.

“To replace 100,000 tonnes of production in a short order is not going to happen in British Columbia, period,” says Steve Atkinson, managing director of Taste of BC Aquafarms in Nanaimo, B.C. “There’s also the big challenge of trying to transition Atlantic salmon in British Columbia, because this is the wrong place to build Atlantic salmon farms if you’re going to build RAS (recirculating aquaculture systems).”

Atkinson is a pioneer in RAS farming in B.C., and has been producing steelhead salmon on land for more than a decade. Despite its numerous economic and environmental benefits, RAS is not primed to produce the same large volume of Atlantic salmon as net-pen farms — at least not in a way that would make viable business sense.

The cost of building massive land-based fish farms in B.C. will also be astronomical, given the high cost of land in the West Coast and the amount of electricity that will be required to power these RAS farms, he added.

Despite the limitations, there is potential for land-based aquaculture to grow in B.C. but it is only one among other solutions to transitioning net-pen farms. And Atkinson cautions the government against moving the transition too quickly, however.

“If the government moves too quickly, then critical infrastructure that we need will be lost — feed mills, support industries — that isn’t an easy thing to transition in a short-term. It’s taken 30 years to build that support structure.”

Atkinson is not the only one to acknowledge that land-based farming alone will not get the industry to where it needs to be under the blue economy goals. B.C.’s biggest salmon producers are at different stages of testing and evaluating technologies and processes to make their operations as sustainable as possible.

Cermaq Canada is carrying out a trial of its semi-closed containment at its Millar Channel farm site, off the west coast of Vancouver Island. The system uses a patented material to form a fully enclosed lining, or bag to effectively eliminate interactions between farmed salmon and wild populations. Water is pumped into the system through four screened sea water intakes, and exits the bag through 12 deep-level screened ports, allowing for greater precision farming.

Growing smolts longer on land so they spend less time at sea, therefore providing less period of of interaction with wild population, is a process being explored by Grieg Seafood. Allowing smolts to grow larger in the hatchery also makes for stronger, healthier fish that can better handle transition from fresh to saltwater.

For Kennedy, addressing what an “acceptable” solution is should be part of the conversation. “If our current operations in the ocean are able to reduce risk to wild salmon by 80 to 90 per cent, is that acceptable? And if not, what is acceptable? Because to the extremes and activists, most of the time, they’re saying, 100 per cent we have to get rid of every risk. And for any human activity, that is impossible.

“Whereas, we want a reasonable pathway forward to say, ‘Where are there risks that need to be reduced and addressed?’ I think we’ve done an amazing job over the last 20 years in addressing those (risks) with very strong regulations by the Government of Canada and British Columbia.”

Mowi, Grieg and the BCSFA declined requests for comment, citing early days in the consultation process. Cermaq Canada did not return this writer’s request for an interview.