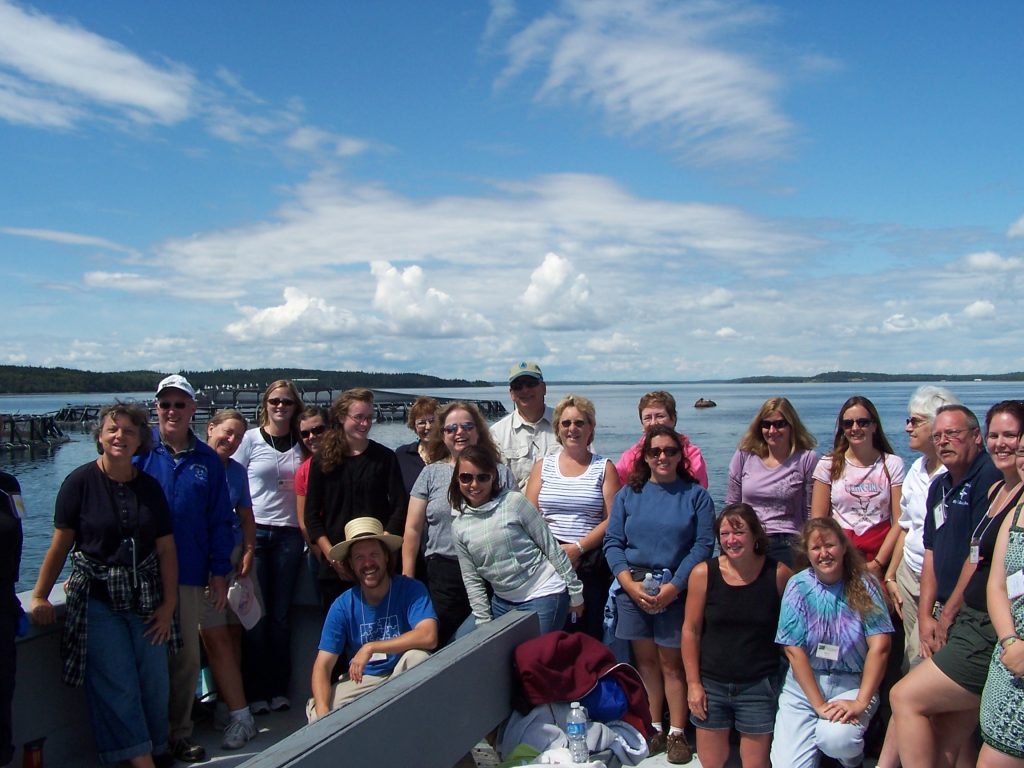 Sebastian Belle, Director of the Maine Aquaculture Association (MAA), observes that an increasing number of the state’s aquaculture entrepreneurs are finding ways to link Maine’s $8 million tourism industry with mariculture operations. To explore this trend, in December MAA helped sponsor workshops on Fisheries, Aquaculture and Tourism that were held at three separate venues across the state.

The workshops attracted over 125 participants, including aquaculturists and fishermen, people from the tourism industry, support agencies and organizations. Topics included creating partnerships, liability and insurance issues and aquaculture-specific issues. (Fact sheets and additional links are available at www.seagrant.umaine.edu/fisheries-tourism.)

Belle observes that visitors to Maine are “fascinated with the working waterfront and want to learn where their seafood comes from.” This interest, linked with the current surge to buy local and buy fresh has created a positive climate for any ventures that connect tourists with aquafarms.

MAA is launching a new program, the Maine Seafood Culinary Institute, that will allow chefs to spend several days traveling the coast of Maine. During a three or four day tour along the coast, they will visit aquafarms, stay in B&Bs, and meet with local chefs to learn how local Maine seafood, particularly farmed seafood, is important in area restaurants and what is unique about it. After two years, Belle hopes this will broaden to a chef-to-homemaker program where people tour farms and attend master classes with local chefs on how to cook seafood.

MAA also has organized a program where they put a person knowledgeable about shellfish farms on board small cruise ships that stop in areas near mussel farms. Passengers learn details about the farm’s work, and are served farmed mussels for dinner. It can be difficult to arrange this tourism/aquaculture link Belle says, because a ship’s programs are controlled by jobbers who package the tours, but he believes it has potential. Now that cruise ships have begun to stop at Eastport, Maine, he hopes to include salmon farms in their programs.

Another strong connection has been established with “foodies” or food writers who come to Maine to tour oyster farms so they can write blogs or articles about the subtle differences of oysters raised at different locations. Also, national and international food lovers pack “Harvest on the Harbor” in Portland, an annual event which features local seafood and beverages.

Seven years ago MAA created a brochure to explain what people in a kayak might see when they encountered an aquafarm. “We printed 4,000 copies,” Belle says, “and ran though them in two years.” Some kayak companies, he adds, include mussel and oyster farms in their tours, and operators of wildlife tours often stop at a fish or shellfish farm in their outings. Also, guides for recreational fishing take their clients to fish and shellfish farms with floating gear because striped bass tend to hang out at the site.

Belle says Maine has not been able to capitalize on agratourism, where people stay at a farm and participate in daily work. He explains that this has become a rapidly growing segment of the tourism industry in Europe, but in the US, liability issues need to be worked out, and also ways to compensate farmers.

At first glance, Nonesuch Oysters, located in Scarborough, Maine, and Island Creek Oysters of Duxbury, Massachusetts, seem to have little in common other than that each raises and sells American oysters (Crassostrea virginica).

Chris Sherman, president of Island Creek, says that they have 17 employees and sell about 100,000 oysters a week; Nonesuch owner Abigail Carroll, who managed her farm alone until last year when she hired two employees, laughs when she hears that, saying that she may sell 100,000 oysters in a year.

But what both Carroll and Sherman have in common is that they seek ways for their farms to earn additional income from the tourist trade.

Each offers oyster catering for special events, which multiply in the tourist season, but there’s a difference in presentation. Carroll, who spent the past third of her life living in France, has added a French flair: shuckers at the Nonesuch ice-filled oyster boat are dressed in snappy striped shirts and pristine chef’s aprons. Island Creek, on the other hand, offers a popular shucker known as the Oyster Dude, whose clothing and hairstyle is considerably more casual.

Carroll keeps a high profile at Scarborough Pier where the town allows her to station a floating nursery. She increases this high visibility by donating oysters to local events. “I give a lot of oysters away for local auctions and community groups,” she says, “and I try to slip in a tour along with that.”

In creating the Island Creek Foundation, established with funds from the wildly successful Duxbury Oyster Festival, Island Creek has taken its community participation to a global scale. The non-profit venture supports projects that use sustainable aquaculture as a food source – tilapia in Haiti and shellfish in Zanzibar.

Island Creek, which is located off the tourist track, creates interest in its farm at its two restaurants, Row 34 and Island Creek Oyster Bar, located in nearby Boston. Menus feature their oysters with other local seafood, each identified with its source of origin. They have been conducting farm tours for several years. In 2013, the outings included a group skiff tour that culminated with a visit to the Oysterplex, a floating cottage that serves as the farm’s base of operations, to savor oysters and meet staff. Carroll will offer similar tours this summer.

This year, to make tours more accessible, Sherman says they have decided instead to operate two afternoon tours for individuals every Friday during the summer. People will sign up online for $20 a person.

Neither Carroll or Sherman can sell oysters to tourists directly at their farm, but Island Creek owns a retail store up the road at their wholesale site. In Maine, Carroll has been the driving force behind a proposal to permit shellfish farmers to sell their product to tourists at the farm.

“As it stands now,” she explains, “we can give free tastes at the site, but we can’t send anyone home with product. It’s like going to Napa Valley on a wine tour, finding a wine you enjoy, and then having them send you to the supermarket to buy it.” She hopes the proposal will be passed in time for the coming tourist season. That would give added appeal to the coastal “Maine Oyster Tasting Trail” that she is working on with other growers.

Both Sherman and Carroll welcome kayakers to their farms on an informal basis, but Carroll has an advantage in being situated at the edge of a protected marsh with a kayak rental company nearby. She hopes to work out a formal arrangement with the company. Island Creek also offers popular “farm share” programs that provide shareholders not only with oysters but also with less familiar seasonal marine edibles like whelks, periwinkles and pea beans, and include chef-created recipes for all.

Sherman says he hopes to create a tourist attraction modeled on one he has seen at Hog Island Oysters in California. “They have a picnic area where visitors can shuck oysters and picnic,” he says, “but it’s hard to find land for that here in New England with waterfront at such a premium.”