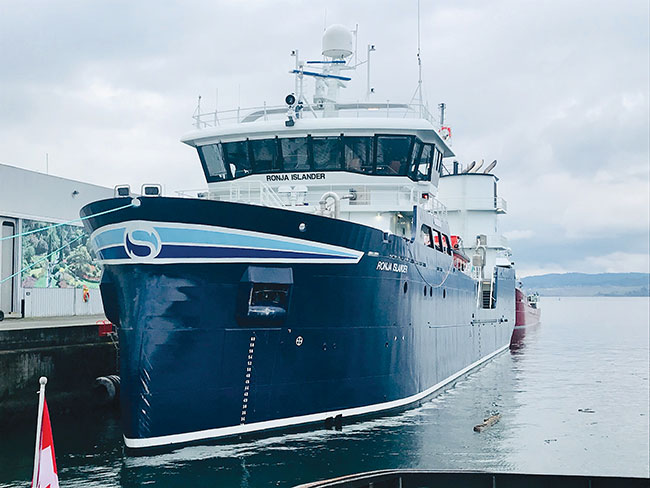 Like in agriculture, lice/pest management is an arms race, but the marine environment makes it even more difficult to precisely hit the target pest and avoid unintended negative effects on general wildlife,” says a new review of delousing methods published by the Norwegian University of Science and Technology (NTNU).

To win this battle, salmon producers have quipped themselves with weapons that exploit vulnerabilities of sea lice.  It’s an ongoing campaign characterized by international cooperation, advanced engineering, biological scrutiny, and an all-of-the-above approach to tactics.

That’s because these arthropods are an elusive enemy.  In the salmon farming environment, they thrive, reproduce fast, and develop resistance to pest management techniques.

Data from the Norwegian Veterinary Institute’s (NVI) Annual Fish Health Report show the use of chemicals to treat sea lice in Norwegian salmon aquaculture saw a dramatic 80-percent drop in 2019 from 2015, while thermal, mechanical, and freshwater treatments rose.

In a 2021 report from the institute, a new data point emerged:  combinations of thermal, mechanical, and freshwater treatments almost tripled.  With that comes a need to outfit vessels – especially well boats – with greater efficiency and flexibility.

Sea Lice
Sea lice have high reproductive output in a short life cycle – perhaps 16 generations a year – enabling them to develop rapid evolutionary responses.  But there are vulnerabilities, as well.

For example, these small parasites (which measure less than 10 mm) don’t tolerate sudden changes in temperature. By 2017, thermal baths became the most commonly used delousing method, said the NVI. Thermolicer and Optilicer populated work boats, barges (with and without their own propulsion), and well boats.

Delousing: Pros and Cons
Improvement of these methods has been quite continuous, Båtnes notes. She attributed it to cooperation among manufacturers, well boat companies, fish farmers, researchers, and fish health personnel.

But advancement could occur if limitations are also acknowledged as “different methods have their pros and cons,” says Båtnes.

Thermal baths utilize a machine into which fish are pumped and then passed through a loop where, for about 30 seconds, there is a section of heated sea water between 28°C and 34°C.  While effective, there’s potential injuries to the fish. Scientists note that it has the greatest mortality rate among non-medicinal methods, and some have raised concerns about causing pain to the fish.

Freshwater baths are gentle on the fish, but some injuries may occur when they are pumped into tubes taking them into the wells. A major downside is the treatment requires five to 10 hours.  Scientists are also concerned that sea lice may evolve freshwater tolerance.

Though flushing systems are effective and efficient (certain configurations can treat about 80 tons of fish per hour), loss of scale, gill bleeding, and wounds may occur.

Costs
In 2016-17, Nofima conducted an in-depth study of costs related to different delousing methods.  It was a comprehensive look at thermal, freshwater, and flushing treatments, as well as feed medical treatments, lasers, cleaner fish, and more.

Researchers modeled costs based on a full-site treatment of 4,000 tons of relatively large salmon.  Flushing was found to be only 30 percent of the cost of freshwater treatments; thermal 36 percent.

The costs of well boats were a key driver in the higher cost of freshwater treatments, which are unique to that vessel. Audun Iversen, one of the researchers, told Aquaculture North America recently, “Rates for well boats are high, as their capacity is limited. Freshwater treatment requires a large boat and is a time-consuming process. Sometimes they must also even travel some distance to refill freshwater.”

Well boats do much more than sea lice treatments. They count and grade fish, then transport them among cages and to processing facilities. Increasingly, they are being designed for dynamic positioning, onboard freshwater generation, energy efficiency, and limited environmental impact.

New for well boats
Since its introduction in 2017, the FLS flushing delouser has been installed on service boats and barges.  The FSV Group, a Norwegian service boat operator that services Mowi’s farms in Atlantic Canada, has installed the delouser on three of the 12 vessels it currently operates.

“As the complexity of farming operations grows, companies are asking themselves, ‘Why can’t we outsource some of this to a specialized contractor?’” says chief executive Arild Aasmyr.

FSV chose the FLS cage-to-cage flushing system, which moves untreated fish from one net pen to another in chemical-free sea water at ambient temperatures.  It’s “like a jet stream,” says Lars Georg Backer, head of FLS.  Along the way, the fish pass through two flushing units which dislodge the sea lice.

One way the FLS delouser differs from others is its “siphon” effect – a “gentler” method to bring the fish to the flushing area, says Backer.  He contrasts it to methods that must lift fish 3-1/2 meters. “They have to blow the fish on top of the boat,” which can mean injuries.

A vacuum ejector pump exerts light pressure of 0.35 to 0.45 bar until the fish reach the two flushing units, where the pressure doubles.  Still, it is only one-fifth of the water pressure of an average kitchen faucet.

With such light pressure, each line only consumes about 80 kWh, adds Backer.

Determining the optimal diameter of the pipe presented a challenge to the engineers who have been refining the system for 10 years. “The bigger the diameter, the harder you need to flush the fish,” says Backer.  On the other hand, “the smaller the diameter, the stronger the suction required, which is worse for the fish.”  After many trials, FLS landed on 250 mm in diameter.

“A good result is not only the delousing effect, but what happens to the fish, including the impact on welfare in weeks following treatment. We experience mortalities at 0.1 percent – and even lower – depending on initial fish conditions, time since last treatment, type of treatment, and the performance of the operation (including crowding),” he says.

Although cage-to-cage flushing systems have been altered to equip well boats, Backer believes it is “a halfway solution,” so the company created one specifically for well boats.

The challenge, however, revolved around the pipelines coming out of the well – because they are 500mm.  Flushing with that diameter would require “extreme pressure” and jeopardize fish welfare.  The solution involved a rectangular configuration with the same height as the 250-mm line.

“It’s a good solution when it comes to sustainability, both for the fish welfare but also for the environment, like the use of energy,” says Backer.

For well boats, where deck space is at a premium, another benefit is the new offering’s 15-sqm footprint.  It will give well boat operators the opportunity to utilize different treatments, such as freshwater and flushing, on the same vessel in their drive to avoid resistance to any one method.

“It is important to make variations in delousing methods,” Backer emphasizes.

The Norwegian Food Safety Authority will now test the commercial suitability of FLS’ “new invention. When it debuts next summer, it will be called FLS Caligus R500: R for the unique rectangular design, 500 for the size of well boat pipelines, and, of course, Caligus for one genus of sea lice – the persistent parasite.