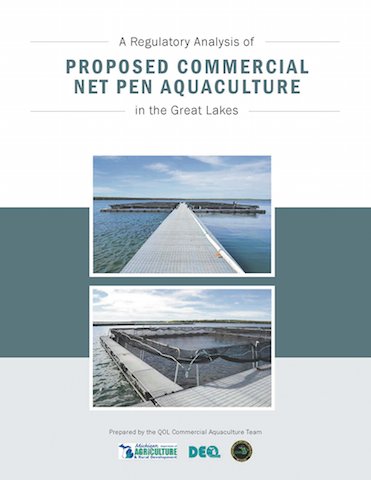 “With 10% of the worlds’ usable freshwater within its borders

Freshwater supplies over 60% of the world’s production of seafood and Michigan State, nestled between Lakes Superior, Michigan, Huron and Erie, has a lot of fresh water.

“With 10% of the worlds’ usable freshwater within its borders, many believe strongly that Michigan is capable of creating a billion dollar sustainable seafood sector by 2025” according to comments in a Michigan Sea Grant Report entitled “A Strategic Plan for a Thriving and Sustainable Aquaculture Industry in Michigan” published last year.  The report was adopted by the Michigan Aquaculture Association as their strategic plan.

The report is bullish on aquaculture for Michigan and a key piece in building that industry would be raising rainbow trout in net pens – like the Canadian net pen rainbow trout industry in Lake Huron.  But not everyone is bullish about net pens on the American side and they got their say when friends and foes, squared off at a meeting in Gaylord Michigan “to review and discuss net pen aquaculture in the Great Lakes.”

As Dr. Tammy Newcomb, Senior Water Policy Advisor with the Michigan Department of Natural Resources (DNR), clearly explained in her introductory remarks, this meeting was not an application review.  “There have been a lot of assumptions that because departments are doing this work that we are moving forward with net pen aquaculture in the Great Lakes,” Newcomb said.  “I have to tell you no, that is not true.”

Over 9 months ago the DNR received two “proposals” for net pen aquaculture operations. Canadian company Coldwater Fisheries, who currently operate net pen sites in Lake Huron, are proposing to farm two sites in Bays de Noc on the shore of northern Lake Michigan.  Aquaculture Research Corp, a non-profit research organization, seeks to grow the aquaculture industry in the Great Lakes Region and is looking at three possible sites on the shores of northern Lake Huron.

A science panel considered the environment/ecological issues of net-pen aquaculture in Lake Michigan. They looked at operations, fish health and disease, ecological interactions and siting. They didn’t try to skirt any of the issues and they made specific recommendations that if net pen aquaculture were to proceed, prudent practice would require certain procedures be followed.

Under operations, the panel noted the successful experience of the Province of Ontario in Canada, where net pen rainbow trout farms have operated since 1988 around Manitoulin Island in Lake Huron. Currently Ontario has six rainbow trout farms license and there are three unlicensed First Nations operations.  Estimated production from all facilities approaches eight thousand metric tons a year.

The panel acknowledged that yes, net pen fish do escape, fish waste and excess food can build up on the lake bed, and wind and ice events are particular concerns. The panel called for triploid native fish to be raised, extensive monitoring to occur, and the issues such as ice and invasive zebra mussels be addressed.

Considering fish health, the panel noted that there were risks in disease transfer from wild to farmed fish as well as from farmed to wild.  Stocking with specific pathogen free fish, continuous health monitoring, use of licensed and accredited veterinarians, and adoption of strict biosecurity plans were recommended.  It was noted that Ontario net pen operations had only encountered Columnaris and Coldwater diseases.

Ecological interactions received the most consideration from the panel.  Effluent is an unavoidable occurrence in net pen aquaculture and while the panel hoped for progress in waste removal, they addressed the nutrient and phosphorus buildup at pen sites.  Recognizing knowledge gaps, the panel called for a technical working group to be developed to further investigate the phosphorus issue.

“My town has a population of 50 now that my daughter has arrived,” said Vicki Shwab Director of Economic Development for Delta County where Coldwater is proposing to develop a net pen site, outlined her region’s point of view.  “In the midst of our major employer restructuring, we need to celebrate each and every job that diversifies us from the vulnerable pulp and paper industry.”

In 2012, the county identified aquaculture as a new industry to develop Schwab explained.  “Keep in mind we are recommending a controlled pilot effort to be monitored by the state,” (and more intensely by you folk, she quipped to the other meeting attendees).  “The project will create eight direct jobs that will feed into our existing commercial fishing industry supply chain.”

Schwab said they had “tremendous support” from local elected officials, the tourism association, and the local sports fishing group.  “We remain committed to working with you to raise healthy Michigan fish to feed Michigan people.”

Legislation and the Senator

The operation of a net pen aquaculture site in Michigan is a moot point just now.  “Current law does not allow the state to register a commercial net pen aquaculture facility in the Great Lakes,” says Dr. Tammy Newcomb, Michigan Department of Natural Resources.  The Aquaculture Development Act of 1996 states that aquaculture facilities may only be registered by Michigan Department of Agriculture and Rural Development if they are operating in privately controlled waters. “The Great Lakes are not privately controlled waters.” adds Newcomb.

Newcomb further explained the process by email. “The agencies will receive public comment until close of business on December 4, 2015.  The public input will be drafted into the 6th report of our ecosystem management process. This report, along with submitted public comments will be made available after the close of public input,” Newcomb wrote.

“In January, the Directors will consider all of the information that was presented before moving forward with a policy determination.  Any changes in legislation is in the purview of the legislature and the efforts undertaken to date would inform that process should there be interest,” she concluded.

Jones said commercial fish farms in the Great Lakes are all risk and no reward. They are proven sources of pollution, invasive species, disease, and fugitive fish escaping to wreak havoc on our Great Lakes fisheries.

“Concentrated fish poo is just not Pure Michigan,” Jones said. “A typical 200,000 fish operation creates as much waste as a city of 65,000 people, which would make the Great Lakes a giant toilet bowl.”