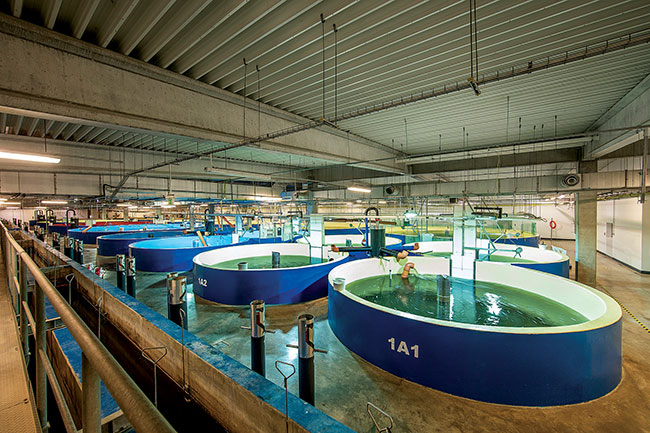 Production hall at AquaMaof’s R&D training center in Poland. The market will ask probing questions about energy use and fish density in RAS operations in the foreseeable future, says an expert Photo: AquaMaof

Land-based aquaculture responds beautifully as complement to conventional production methods but producers in this emerging sector should be ready to answer concerns about energy use and fish density.

While land-based aquaculture reduces stress on the planet because of its proximity to market, negates the need for sea lice treatments and does not build up feces or feeds in downstream ecosystems, other questions from the perspective of animal welfare and energy use will be imminent because of consumers’ sharpened focus on sustainability, Halseth suggested.

Producers, whether big or small, will be asked what kind of energy they use to power their operations, as well as the stocking densities in the tanks, he said.

“Density is a very subjective measure, and fish in the wild can have very high density voluntarily. (But in aquaculture) people will look at 70 or 80 kilos of fish per cubic meter as something negative without really having an objective measure of that.

“There’s lot of sustainability items linked to farming and net pen farming, and no alternative will be better in absolutely every case, but I think (the land-based sector) will be challenged with these two questions,” he said.

Netherlands-based Nutreco recently invested in the RAS sector via a stake in land-based yellowtail producer Kingfish Zeeland in the Netherlands and in Nordic Aqua Partners’ RAS salmon farm in China.

“It’s super valuable and a focus for West Coast Salmon for sure. We replace environmental risk – diseases, plankton, storms, jellyfish and so on – with human error and mechanical-failure risk, but those things we can develop and improve on and thereby improve animal welfare in production.”

West Coast Salmon plans to build a RAS facility in Nevada designed to produce up to 50,000 metric tons of Atlantic salmon for the US West Coast market.

Still on the sector’s challenges, Johan Fredrik Gjesdal, chief of land-based aquaculture at global aquaculture supplier Akva Group, said the execution of RAS projects, not access to capital, remains the biggest challenge because many new entrants do not necessarily have the expertise vital to scaling up this emerging sector.

“That’s just the way it’s going to be because this segment is drawing newcomers. Over time people will learn, and this industry will attract talent…. The projects that are succeeding [are the ones that] have put together a strong team,” he said.

Indeed, money is flowing into this sector. According to Linn Cathrin Slettedal, senior manager, primary market at Oslo Bors, 14 companies have started to list on the seafood exchange in the last one and a half years alone (Atlantic Sapphire listed in 2018). Activity remains high, with Norwegian land-based farmer Salmon Evolution planning a public share listing on the Oslo main stock exchange in 3Q 2021.

It’s important to remember that securing the financing is just one of the steps to success; execution is actually the biggest factor, according to Yoav Dagan, one of the founders of Israel-based AquaMaof Aquaculture Technologies.

“People think that finding the money is the challenge, but actually the execution side is the challenge,” said Dagan, noting that there is growing awareness of this factor and newer start-ups are better at performing risk analysis and doing their due diligence to understand the risks and pitfalls ahead of them.

“In the past, the systems were too small, and production people did not have enough know-how,” said Dagan. “Today it’s a different ball game. You have very educated people, you have good financing methods, and you have educated investors.”

Another important factor to industry success is finding the right systems and technologies to achieve stable yields. For that reason, Akva, which is developing feeding systems specifically for larger fish, is hoping to help its customers improve their operation systems.

Said Gjesdal: “We need to make production more repeatable and predictable to reduce operational risk. We still see that some farmers are suffering with too low productivity. We have not crossed the finish line, and we’re working to make sure the technology fits the purpose.”

All this being said, no one thinks land-based farms will take the place of offshore aquaculture and open nets any time soon. For Nutreco’s Halseth, it is more likely to develop and grow in parallel.

“There is room for land-based aquaculture, but it will need to be absolutely competitive on price and cost, not only on sustainability, to really transition from the traditional methods,” he said.

“RAS systems are far from taking over traditional farming. As I’ve mentioned, the challenge is execution. It’s important to take your time as people get up to speed on their know-how.”

Which is to say, more of the fish ending up on your plate will eventually be raised on land, but the sector will need to continue wrestling with growing pains for the foreseeable future.