2018 was a busy year for the US farmed shellfish industry, filled with challenges, opportunities, and innovative ideas and techniques. American shellfish farmers have fought against regulatory hurdles and changing weather patterns while earning victories that will aid the industry in the future. 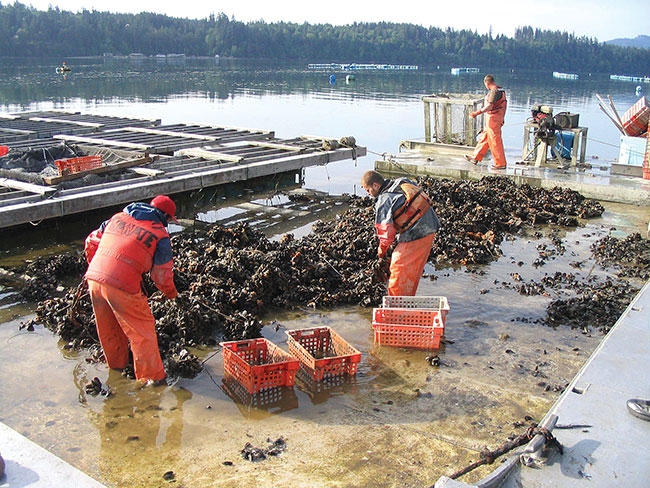 But the industry’s growth could lead to a greater challenge of a saturated market that requires industry-wide cooperation.

Coastal viewpoints
Official government statistics on the value of the industry are several years out of date, but Bob Rheault, executive director of the East Coast Shellfish Growers Association, estimates the industry is worth roughly half a billion US dollars per year. The west coast produces more than the east, while exact figures for the southern gulf coast are hard to come by. Rheault says the east coast saw a sturdy increase in production by existing producers and a steady influx of new entrants.

“On the east coast, we’ve been seeing a very rapid expansion of oyster culture,” says Rheault. “Clam culture’s been pretty flat, even though prices have recovered a little bit from when prices collapsed about 20 years ago.”

Margaret Pilaro, executive director of the Pacific Coast Shellfish Growers Association, says the most significant development on the west coast has been the adoption of the Army Corps of Engineers Nationwide Permit number 48 in Washington State, where the majority of west coast shellfish farming occurs. Getting issues surrounding the permit resolved was a 10-year effort.

European potential
Another major development for both coasts has been the agreement to resume shellfish trade with the European Union on a limited basis – Massachusetts and Washington will be allowed to trade with the EU in 2019. Around a decade ago, the US Food and Drug Administration declined to allow Great Britain to export shellfish to the US over norovirus concerns. In what Rheault sarcastically describes as “a remarkable feat of acting like adults,” the EU retaliated by disallowing US shellfish exports.

Rheault says that while he hasn’t seen too much interest from Massachusetts in selling to Europe, there is some jealousy on the part of operators in other states who wish they had access to that market.

“2019 will probably see us working to ensure that other states are afforded that same opportunity,” says Pilaro. “There’ll be attempts to level the playing field and open it back up for the other states as well.”

Climate change impacts
One of the most talked about issues of 2018, in any sector, is the impact of climate change, as seen in extreme weather patterns and powerful tropical storms. These storms can have wide-reaching impacts on the industry. For instance, when an important sewage treatment plant in Newark was flooded during Hurricane Sandy (as with most sewage treatment plants, it was situated in a low-lying area), it was six months before they sold another shellfish out of New Jersey, says Rheault. “I think that’s going to become more common,” he says.

“In the south-east especially, there’s really been some harm to the industry by these really intense hurricanes,” says Bill Mook, owner of Maine’s Mook Sea Farm. “If you want to talk about the year in review, you can’t ignore that, both in North Carolina and Florida.”

Mook, along with six other producers representing both coasts, decided to tackle this issue by forming the Shellfish Growers Climate Coalition (see sidebar).

Nationwide standards lacking
One of the most enduring challenges for the industry is inconsistency of regulations and standards across various states. Timothy Londregan, owner of Connecticut’s Niantic Bay Shellfish Farm, says that the permitting process is much easier to comply with in some states than others. The adoption of relatively new equipment like tumbler baskets or floating bag culture, which are helping drive the growth of the industry, is slow moving.

“In Connecticut, you can do anything you want, but it has to go through the full-blown process,” says Londregan. “If there were standards established, if what you propose fits the standards, then that’s one hurdle already cleared.”

Londregan is also frustrated by the inconsistency in funding for state aquaculture programs. The Connecticut Department of Aquaculture, in his experience, lacks the capacity the keep the industry moving.

“I have a product, I’m ready to sell, I have the capacity, but I need the green light from you guys,” says Londregan. “The green light should be on, but it’s off because there’s not enough staff to do all the paper work, to do all the testing, to even have a boat in our part of the [Long Island] Sound. They fully support me, but they’re being pulled in five different directions and they can only go in one.”

While the growth of the oyster farming industry is encouraging, Rheault is concerned about the possibility of market saturation. He’s already seen it happen with clams, tilapia, catfish, and salmon – we learn how to grow a product, the market gets flooded and the price drops.

“I’ve been singing this song for 30 years,” says Rheault. “It’s been my recurring fear that we might crash the price of oysters.”

The solution, Rheault says, is to master marketing. As marketing skills and shellfish farming savvy don’t necessarily go hand-in-hand, he believes forming a cooperative will be the answer. That way, one skilled professional can handle marketing for a collective of producers. Such is the idea behind Panacea Oyster Co-op  (see ANA, March/April 2018), a Florida cooperative that brings oyster farmers together to share experiences, get support and have a guaranteed place to sell their product, at a guaranteed price.

As more inexperienced participants join the industry, product quality can become an issue, however. Bill Dewey, director of public affairs for Washington’s Taylor Shellfish Farms, says that some new entrants don’t understand the importance of maintaining quality. For that reason, he’d like to see the adoption of nationwide standards for quality and size, such as those in the EU.

“The industry there is 10 times the size of that in the US,” notes Dewey. Nationwide standards may seem like a pain to comply with, but they’ve driven the EU market to grow to the extent that is has, he says.

Promoting the industry and increasing market share by attracting people to consume shellfish products is also key to the industry’s future. “I don’t know how effective we are at creating new shellfish lovers every day,” admits Pilaro. “That’s part of what we want to try to do.”

Mook, however, believes that such efforts should be an industry-wide task. “I believe it’s possible but it’s going to take spending money on marketing, and not just companies promoting their own brands, but really encouraging people to eat more of these products,” he says.

One of the effects of the phenomenon is the diminishing size and falling population of oysters, according to a study carried out by Scottish and Australian scientists on Sydney rock oysters in New South Wales.

“Everybody felt ocean acidification is a problem that’s only going to get worse, but it’s also not the only thing that’s related to climate change that is impacting us and starting to cost our businesses,” says Mook. He and fellow shellfish farmers behind Fishers Island Oyster Farm, Taylor Shellfish Farms,
Island Creek, Rappahannock Oyster Co, Hama Hama Co and Hog Island Oyster Co decided to do something about it. “The feeling was that we should start to address, to the extent that we can, the root cause of the problem, which is greenhouse gas emissions,” he says.

Over the course of a series of discussions in early 2017, the group decided that the best approach would be to find a politically neutral non-profit that can lead a national effort. Thus was born the Shellfish Growers Climate Coalition, led by The Nature Conservancy. The organization was deemed the ideal partner because it has presence in every state and can call on members of the coalition to testify to climate-change impacts on the state level.

“It’s what I call an endorsement coalition,” says Mook. “The idea is to give The Nature Conservancy access to people with real stories that are experiencing real impacts of climate change in their businesses now. The feeling is also that in this day and age in politics, businesses carry more weight than non-governmental organizations. For us, it’s a way to feel like we’re doing what we can to address the root problem that has now been underlined in red ink.”