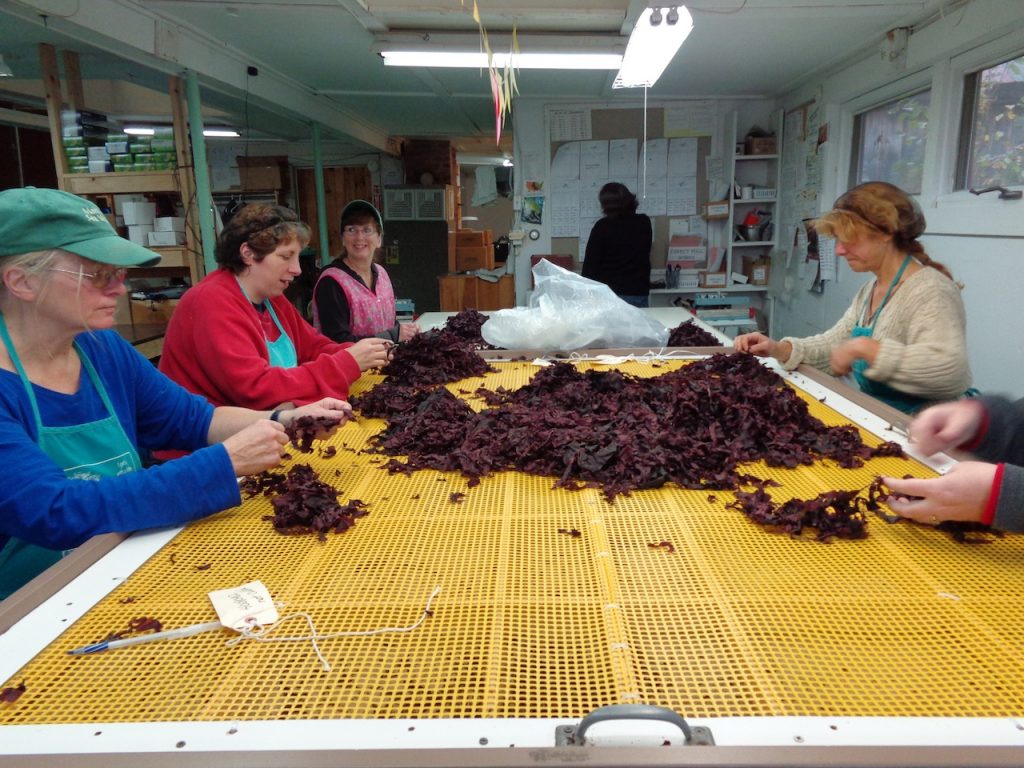 And not just any seaweed. In keeping with the missions of MCSV, which in 2012 received an award from the macrobiotic Kushi Institute for “the highest quality organic Sea Vegetable Products,” the seaweed needs to come from North Atlantic waters; it needs to be as local as possible; and it needs to be tended “with respect for the environment.”

Erhart, who processed 100,000 pounds last year, says he has almost maxed out his sources for sustainably harvested North Atlantic wild seaweed and that he cannot meet the increasing demand for MSCV seaweed products that has developed over the past three years.

“I hate to do it,” he says, “but I’ve had to limit quantities for some of my big customers and even turn others away.” Shortages occur frequently, he says, in dulse, (Palmaria palmate), nori (native Porphyra) and alaria (Alaria esculenta).

Fortunately, at the same time, there has been increased interest in farming seaweed in Maine waters, either beneath mussel rafts or on longlines attached to the rafts, and as IMTA projects on fish farms. Erhart has jumped in to support this new industry, lending his expertise, time, energy and funds to the cause which can help him meet the demand for seaweed products and expand his business to include new products developed specifically around farmed seaweeds. He has purchased land for a new processing facility that will make it possible to handle both wild harvested and farmed seaweeds.

Erhart attributes the rise in demand for seaweed products from North Atlantic waters to increased consumer awareness of seaweed as a healthful food and worries about contamination after the Fukishima disaster.

“There’s a lot of curiosity about seaweed in general,” he says. “MCSV gets calls all the time. It’s not just health nuts.” He observes that in Maine, many high-end restaurants are using seaweeds, and they are popular at Farmers’ Markets.

Seaweed 2013, a conference held in August, attracted over 150 participants, including fishermen, shellfish and fin fish farmers, teachers, nutritionists, researchers, small processors, and representatives of supporting organizations. A Maine Seaweed Festival is planned for next August (www.http://signup.seaweedfest.com).

Erhart won a $19,842 grant from Maine Technology Institute to help Sarah Redmond, Maine Sea Grant Extension Associate at the University of Maine’s Center for Cooperative Aquaculture Research (CCAR), and Susan Brawley, a professor in UMaine School of Marine Sciences, fund “Seeding Technologies for Sea Vegetables.” To help grow the industry, they are developing native seaweed seeded nets and ropes which will be available for Maine seaweed farmers. Redmond says the grant funded upgrading a former microalgal lab into a top notch facility for research with native seaweeds and purchase of a Porphyra seeding wheel which they needed to work with native nori.

Erhart is concerned about establishing infrastructure to support farmers so that harvested product can be dealt with quickly and efficiently. A major problem is to figure out a simple, cost-effective way to dry large quantities. He, Redmond and his daughter Seraphina, who works with him at MCSV, are exploring the idea of a central location to dry large quantities of seaweed farmed in the Midcoast and Downeast regions. One possibility is a food processing plant where they may be able to utilize excess heat, but they need engineering advice before moving forward.

Erhart is supporting experimental growout sites. In December, he and lobsterman James West, who also plans to raise mussels, had equipment cleared from a former fish lease site in Frenchman Bay and put in CCAR nets seeded with dulse and nori, and ropes with kelp and alaria. They look forward to learning how well the seaweeds will fare at the 35-acre site, which will be shared with Ocean Approved and CCAR.

Erhart says he needs to develop new food products for farmed seaweeds, as they have different taste, texture and color from wild harvested. Most people would not be aware of the difference, he admits, but adds that there’s no doubt “my seaweedophiles will notice.”

It will be advantageous, because unlike processors like Ocean Approved who freeze seaweed and need young, tender unblemished blades for frozen seaweed products, MSCV will be able to mill farmed seaweeds that are harvested later in the season and may have some fouling with epiphytes. The milled product is used in seasoning shakers – presently using more than 10,000 pounds a year – or goes to manufacturers for multiple uses, from supplements to snack foods. Farmed seaweed will create an opening for other products, such as those that utilize the stipes which are not harvested with wild seaweeds.

Redmond says it has been invaluable to draw upon Erhart’s extensive experience with seaweeds. He is equally grateful, saying that at 71, becoming involved with seaweed farming has given him an energizing new direction. “I almost sold my business 14 years ago,” he says. “Now, my enthusiasm is coming back to life, and I’m really enjoying this whole new aspect. It makes a lot of sense to me.”