“This is an evil thing you do. It will not end well,” Brad Hicks says about Minister of Fisheries and Oceans Joyce Murray’s determination to transition BC’s ocean-based farmed salmon industry to unproven farming technology 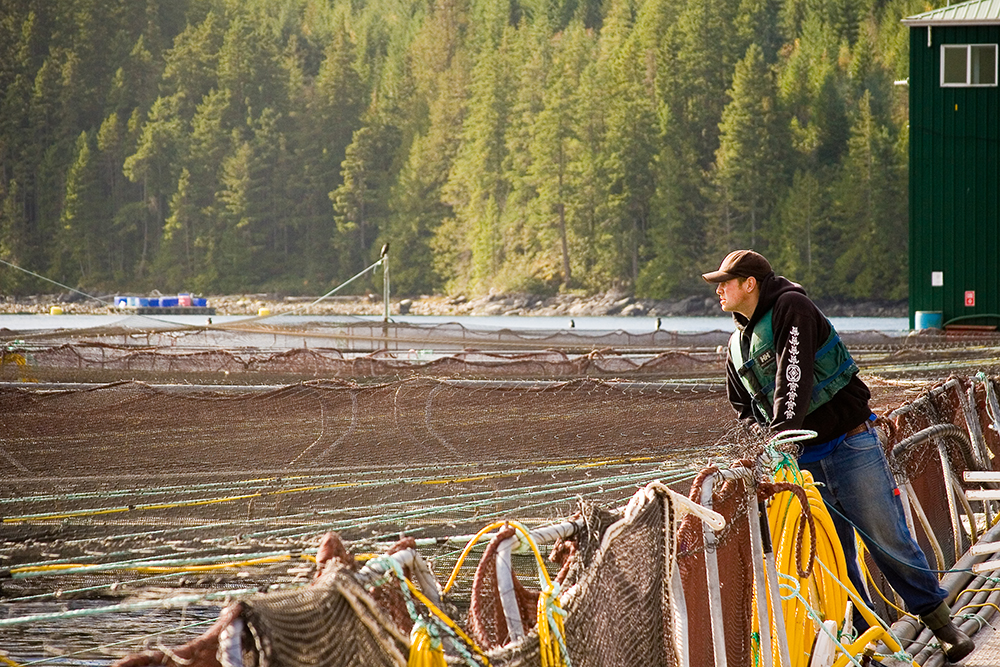 British Columbia to lose 4,700 jobs and $1.2 billion in economic activity if salmon farm licences that are set to expire this June are not reissued. (Photo: BCSFA)

The social and economic wellbeing of rural communities is based on jobs. Jobs are the foundation for prosperity and family unity and the provision of services. Without jobs, rural communities lose people and the tax base and then disintegrate into poverty and eventually into oblivion.

In rural coastal communities, jobs are primarily resource-based. For many years there have been declines in several of the resource sectors. On Vancouver Island in British Columbia, forestry, fishing and mining have all seen significant declines in the past 30 years. The two growth sectors on the island that have prospered are aquaculture and tourism. Tourism relies on disposable income and is subject to significant downturns during recessions and pandemics, resulting in periodic instability. Tourism on Vancouver Island is also very seasonal; thus, only a few are employed during the winter months. Aquaculture is a very stable, year-round food-producing business that’s supported by core family expenditures on food. Coastal communities need a stable, year-round source of income to prosper. Aquaculture fits the bill.

The Minister of Fisheries and Oceans Canada continues to belittle the aquaculture industry in British Columbia. The agency continues to drive an agenda that will result in massive job losses on the north and west coasts of Vancouver Island as well as in other regions of BC that supply services to the aquaculture industry. Northern and western Vancouver Island have seen job losses before in the forestry, mining and fishing industries but nothing close to the potential losses of over 5,000 jobs if the province’s farmed salmon industry is transitioned to other forms of fish farming methods. Seventeen of BC First Nations that currently work with salmon farming in the province have said in March that “moving to land-based farming in their territories is not geographically nor financially possible” for many of them.

It is well documented in social science literature that repercussions are very severe when job losses of this magnitude occur in rural communities. The level of current job destruction the Minister is contemplating will result in the breakup of families, the displacement of the younger generation from the community, a significant loss in the tax base and therefore a decline in community services, a decrease in personal equity and increasing despair which will increase substance-abuse and suicides.

As a proud citizen of Canada, it is very difficult for me to understand how a federal Minister of the Crown at the direction of the Prime Minister’s Office (PMO), would wantonly and purposefully gore the rural communities of Vancouver Island with such a horrific policy decision. How can a Minister of the Crown be so callous? How did we get to this dreadful state of affairs?

Over the years, a false dichotomy has emerged based on the mendacious premise that farmed salmon is a threat to wild salmon. The Department of Fisheries’ own extensive scientific investigations could not support the notation that farmed salmon is a credible threat to wild salmon. So how could the Minister arrive at the conclusion that wiping out thousands of families’ livelihoods on Vancouver Island and that impoverishing whole communities would result in a miracle of wild salmon restoration?

The answer is politics. I have asked several astute observers and practitioners of politics in this country why the PMO is behaving in such a nasty and uncaring way towards its own citizens. The answer from all is the same: POWER. The Liberal Party of Canada has no elected members from any rural ridings in BC. So, by using the rural northern Vancouver Island communities as cannon fodder, the Liberal Party can keep its 15 urban ridings in BC by appeasing the urban communities with false promises of restored nature to stay in power.

As sick as this notion may seem, this appears to be what’s happening. To remain in power, the PMO is willing to sacrifice the citizens and their children and future generations of Northern Vancouver Islanders to a life of poverty and isolation. And the Minister of Fisheries and Oceans is an all-too-willing accomplice. It would be prudent for the Minister and the PMO to remember that Faustian deal-making always ends poorly.

If only the Minister and the PMO could muster an ounce of empathy. But power has no room for empathy, only lust for the spoils of victory. I weep for thee, Canada.

Dr. Brad Hicks has been working in the fish farming industry for over 40 years, has raised six species on a commercial basis and helped pioneer sablefish aquaculture. He was COO for various successful fish farming operations throughout Canada, the US and Chile, and VP of fish feed operations in Canada. Pertinent to this current discussion, Dr. Hicks was responsible for the decision to install the first RAS smolt rearing facility in British Columbia in the mid-1990s. He holds degrees in fish and wildlife biology BSc, veterinary pathology MSc and veterinary medicine DVM.

Related
BC salmon farmers still seeking for answers
Advocating for salmon farming to achieve a low-carbon economy
FN chief to BC salmon farmers: I want to assure my people that I’ve got their best interest
Offshore farming: It’s all about economics
Women
More Women Stories
Editor’s Picks