Public listing of RAS salmon operations in order to raise capital has opened them to scrutiny. A seafood industry veteran looks at the books and finds an expectations/reality gap 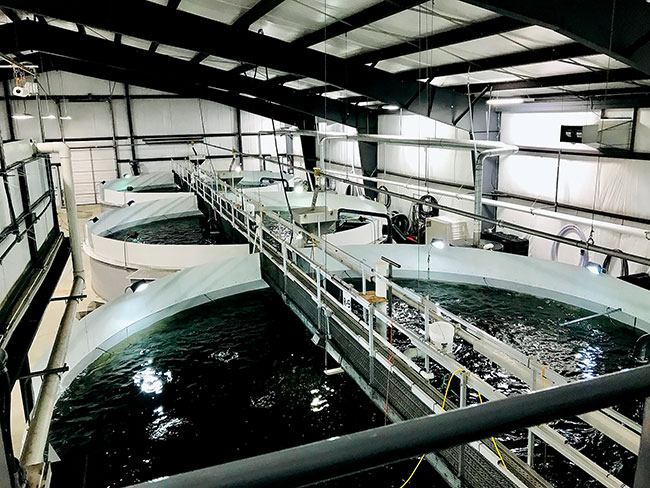 Recirculation aquaculture system (RAS) operations for salmon are still getting a lot of airtime and a substantial amount of investment. Yet profitability remains elusive. The primary excuse for lack of profitability is that this sector is in startup phase and there are still some kinks to be ironed out. Fair enough. But after 10 years of the current round of startups continuing to tread water and about 25 years since the first commercial attempts at RAS for salmon growout, the excuses are starting to wear thin.

For many years it has been difficult to evaluate the success, or lack thereof, of RAS operations because of the lack of public financial reporting. Many companies came and went but the reasons for the failures of these companies were seldom made public.

With the recent listing of companies on public stock exchanges, the promises, the failures and the excuses are now very public. This essay will look into these.

Much of the data here is from Atlantic Sapphire for a variety of reasons:  they have the most data available in the public domain; they are the largest public RAS company; and they’re listed for the longest period. There’s also lot of information made public in the run up to initial financing and several times since. For example, available information about their business plan is facilitating a comparison between what was being promised to investors and what has actually occurred.

Reasonably reliable data is available from annual report filings that date back to 2018. The bulk of the analysis presented here is for 2018, 2019 and 2020. It is not perfect because of a few variations in the reported metrics, necessitating some assumptions and guess work to be made in the analysis, but consistent enough to be enlightening.

Catastrophic losses
Massive fish die-offs have plagued many RAS startups, including Atlantic Sapphire (Table 1). Catastrophic fish mortality events result in significant loss of income both from the biomass lost during the event and the loss of future biomass gains – dead fish don’t grow. This is particularly severe for RAS, where fixed costs are already very high.

Salmon RAS operations have been plagued by early maturation, off-flavour, and slow growth rates. These problems result in both a higher cost of production and a lower selling price, dramatically affecting profitability and cash flow.

The biological and financial performance of the Miami, Florida facility, stated in Atlantic Sapphire’s presentation dated 24 April 2018, fell short of expectations during the years 2018, 2019, and 2020 (Table 2).  Harvest was far below what was forecast, and the financial losses were much greater than predicted. From 2018 to 2020 the production (HOG tonnes) fell short by 8,742 tonnes and the cumulative EBITDA for this period was $105,065,000 below expectations.

Bitter truth
Even for a company the size of Atlantic Sapphire, these are significant numbers. These figures clearly illustrate that the many threats to the business outlined in the Atlantic Sapphire listing Prospectus are very real and need to be taken seriously.

These problems will need to be solved and the threats need to be greatly diminished before salmon RAS can be considered a safe financial investment. Excuses are not a substitute for operational and financial performance.

Large-scale, full growout salmon RAS is new and a very risky and complicated proposition. Atlantic Sapphire has provided the usual litany of reasons for their underperformance: disease, construction issues, lack of skilled personnel, design flaws, slow growth rates, early maturity, product quality issues, market volatility and catastrophic losses. Atlantic Sapphire has also suggested that most of these problems have been solved as a result their experiences in their Danish facility, which has been operational for the past 10 years. Apparently, this is not the case.

Salmon RAS is not the only RAS system experiencing difficulties. The recent complete collapse of the shrimp RAS operations of China-based Sino Agro, which saw cumulative losses of more than $100 million, is another example of the precarious nature of these operations. The Sino Agro story has haunting similarities to the problems being encountered in salmon RAS operations. It was a very large investment based on mega claims. It claimed it would produce 300,000 tonnes of RAS shrimp per year. However, from the beginning, there were problems with facilities and water quality and lack of qualified staff, resulting in significant cost overruns, poor financial performance and limited cash flow.

There are now several public RAS companies, which means there will be access to information on production and financial performance of these operations. But as most of these companies are very recent listings and are not yet in the production, it is still too early to review their financial information.

Some, much smaller RAS systems, seem to be meeting their early performance metrics. An example is The King Fish Company, which raises yellow tail in a RAS facility in the Netherlands. This company is still in the pre-profit stage of development, but it is meeting its production goals and has had no catastrophic events for the last three years.

But even for what appears to be a relatively successful start-up, the runway to positive cashflow and positive earnings is very long, and is likely to encounter some bumps along the way. Time will tell if this venture can be successful.

RAS as a system works fine. However, RAS systems have limitations. They have been used very successfully to raise salmon smolts, tilapia for the live market and for a few other specialty applications. But growing market-size Atlantic salmon profitably in RAS has been elusive. Hundreds of millions have been invested and yet the returns are scant at best and very disappointing for the most part. How long will investors keep the faith? That remains to be seen.

A recent newsletter from Peritus Capital may be foreshadowing events. The newsletter begins with the statement that “RAS has become the ‘it’ investment in the seafood space”. It speaks about the investment being an Environmental, Social and Governance (ESG) and sustainability investment but it does not qualify how RAS fits as an ESG investment other than to confirm that RAS is “imagined” to be and ESG investment. The article then goes on to ask whether investment interest in the sector is a fad. The author states empathically that it is not a fad, but quickly covers his bets:  the capital markets can be fickle, he says.

If entrepreneurs do not fulfill the promises they’ve made and they go back to investors to get more investment dollars out of them, investors will depart. The question is, how patient are these investors? Will they tire of the excuses? After all, business failures only occur when capital investments and loan instruments run out before the company reaches positive cash flow. This can take years and result in massive cumulative losses. So far, Atlantic salmon RAS and shrimp RAS have racked up hundreds of millions of dollars in losses.

1 Tonages were reported as either tonnes or tons. Tons were converted to tonnes for this purpose.
2 EBITDA in USD

Political dogma
In Canada, the federal Liberal government has proposed that the open-net-pen salmon industry in British Columbia transition to other forms of production methods, including RAS. Only a political party desperate to stay in power would even imagine such a destructive public policy. So far, salmon RAS has only proven itself to be unworkable. Before any transition to RAS systems becomes public policy, there needs to be strong indication that the systems can result in profitable outcomes. In the interim, public policy should focus on the use of RAS where it works: in the production of smolts, or in post-smolt production combined with open-net-pen farming.