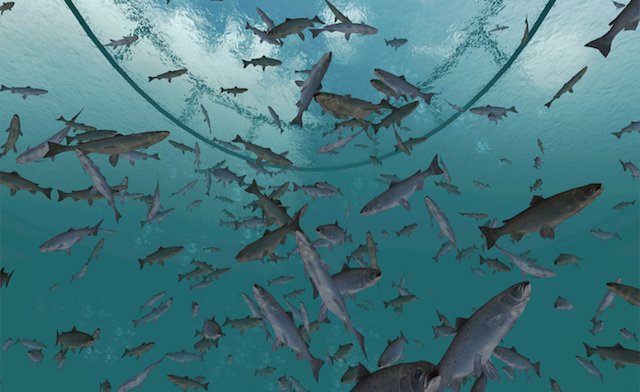 When Ekaterina Prasolova-Førland, an associate professor at the Norwegian University of Science and Technology (NTNU), was contacted by the Norwegian salmon aquaculture company Måsøval Fiskeoppdrett, she was thrilled with the idea of creating a virtual reality technology for salmon aquaculture.  The result is a 3-D immersive and very life-like experience of touring a salmon farm above and below the water and diving into a net pen to swim with the salmon – all without leaving the room.

According to Prasolova-Førland, Virtual Reality (VR) technology was a perfect media to create an

experience that “educated the general public both in Norway and abroad about salmon farming but also explored innovative ways of educating future aquaculture professionals and potentially recruiting young people to the profession.”

VR as a concept has been around since the 1960’s and VR equipment has been available since the late 1990’s.  However recent technological advances have improved the experience and reduced the cost of the technology making it more usable.  VR has many applications in education because it allows users to be completely immersed in a world in great detail – a world that they would not otherwise have access to – vastly expanding the training experience.

Prasolova-Førland and her team used recent developments in low-cost virtual reality technology, such as Oculus Rift googles, which allow the user to tour a virtual reality by turning their head and carry out different actions using a video game controller and a portable mini-simulator.

Though this was Prasolova-Førland’s first aquaculture application, she was involved in  developing 3D virtual world technology for many projects including nursing training simulations, a virtual Afghan village for Norwegian Army training, emergency evacuation simulation at public offices, virtual ski-jumping (that might also be used as part of the Trondheim bid for 2021 World Ski Championship), and is working on a virtual campus for university lectures and other educational activities (see www.aquaculturenorthamerica.com for links to these projects).

This project is seen as opening the doors to using VR for many applications in the aquaculture industry.  Prasolova-Førland explains “I expect the applications for salmon farming industry to develop in 2 major directions: professional training and public education.”  Some of the applications she suggests include safety training, especially in extreme weather conditions (as VR is already used in emergency training) and visualization of complex processes, such as salmon behavior following different feeding patterns, disease development.

The industry is exploring future applications for public awareness and to improve current farming methods. Monicha Seternes, Environment and Development Manager for Måsøval Fiskeoppdrett says future plans “include a simulator that shows the whole production cycle in about one hour instead of 1-2 years”.  They plan to use this technology as part of a proposed visitor center close to one of their sites. “Visitors will be able to come with us in the boat to visit and see the salmon in real as well as well”.  Other potential uses include providing information for more informed management decisions as well as to help the technician make optimal choices during daily operations.

For public education, Prasolova-Førland also sees an entertaining and important application of the technology to create a greater awareness of the industry through games, visualizations and demonstrations made available online, at salmon farm visitor centers, at fish markets, science museums and fairs, tourist offices, and schools.  Or “combining Virtual Reality with tourism and food experiences: such as promoting visits to local fish farms and restaurants with traditional salmon dishes.”

A long time science-fiction fan, Prasolova-Førland sees a broad application of VR and gaming technology explaining “I believe it is important to be on the cutting edge of technological development, not just because the technology is very exciting in itself, but because it is capable of addressing important societal challenges.”

The team is continuing to develop new features to make the user experience more engaging including improving interface, adding features such as motion capture, experimenting with augmented reality, integrating more sophisticated models for fish behavior.   Also planned are public events that demonstrate the simulator together with salmon tasting, a demo and tasting for cruise passengers and “pat a fish” tank at an annual science fair in Trondheim later this year. Using the VR simulators to re-train former oil workers made redundant as a result of the crisis in the Norwegian oil industry to work in aquaculture industry has also been discussed.

“I was really excited to work with the aquaculture project as here you can really explore the full educational potential of the Virtual Reality technology: you can get immersed in an environment that is inaccessible to you otherwise” stated Prasolova-Førland in an email. “We have been able to provide information to many people who don’t know much about aquaculture, it might appear boring and ‘unglamorous’ to the general public, and with this technology we can show it from a completely different angle, as something cool, modern and exciting.”