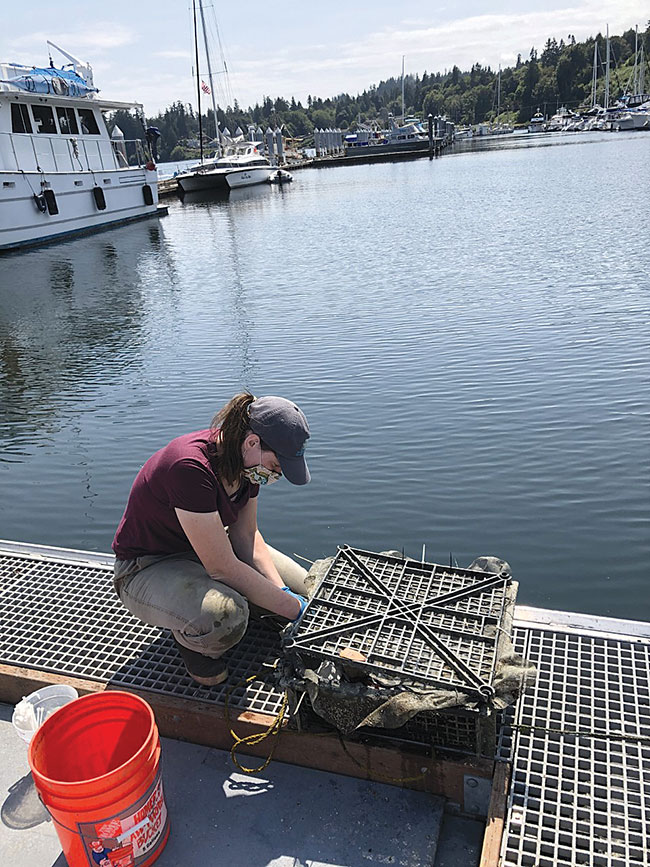 Researchers in Washington State are learning more and more about growing a species largely unknown in North America but prized in Chinese markets: the sea cucumber.

Pacific Shellfish Institute (PSI) researchers are conducting nursery trials on the native giant red sea cucumber (Parastichopus californicus), which is native to local waters. It is one of the most commercially harvested from the wild because of its close resemblance to the popular Japanese spiky sea cucumber (Apostichopus japonicus).

“The economic value of the giant red sea cucumber is very high because it is very similar to A. japonicus,” said study team member Andy Suhrbier, a senior biologist at PSI.

The current research, funded by the Pacific States Marine Fisheries Commission and the Suquamish tribe, comes in the wake of a four-year, NOAA Saltonstall-Kennedy-funded study that wrapped up in late 2019. The latter looked at the hatchery phase of the marine animal, for which similar studies in Alaska and British Columbia have served as valuable reference.

In the ongoing research, the team aims to determine optimal food sources, delivery, feeding rates and stocking densities for juvenile sea cucumbers to accelerate growth at the nursery stage, shortening total grow-out time. They also are looking at tribal (Jamestown S’klallam and Suquamish) shellfish nursery sites where sea cucumbers can be placed to feed off shellfish waste. 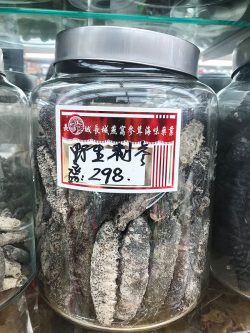 Sea cucumber for sale at Vancouver Chinatown for C$298/lb ($230/lb). The marine animals are prized in Chinese culture for their medicinal properties
Photo: Liza Mayer

The researchers have already made some exciting discoveries: initial feeding trials have shown some promising results with diets including macroalgae and mussel waste, making them ideal for integrated multi-trophic aquaculture (IMTA), they said.

“The husbandry of it is not that difficult, as long as you keep the water quality good. When we had the sea cucumbers with the macroalgae, the large juveniles grew really well and that was actually a little bit surprising. They like the environment,” said Suhrbier, adding that a commercial macroalgae farmer (SOLSEA) in Washington State has seen positive growth when sea cucumbers were added.

Another finding is that the species thrives under mussel rafts, adding to their attraction as a supplemental crop in mussel farms. In experiments aimed at developing co-culture methods, the researchers found that the sea cucumbers like any type of structure under mussel rafts.

“They were not hanging out directly on the sea floor, but rather on top of oyster and mussel shells. There was even a bike that was thrown out there and they hung out on top of the bike. So they want some sort of a platform,” said Suhrbier.

“We’re in early research but we’re learning how to feed them, how they can grow faster from the nursery to harvest and try to find ways that are cheaper and not as labor-intensive,” he said.

The current study will run through 2021 and will include a workshop with the Puget Sound Restoration Fund, who has run hatchery work and studies, to share findings and techniques with a broad audience.