Interest in aquaponics is growing, but the success rate is not exactly stellar. Greener Scenes Aquaponics (GSA) in Brazil, Indiana, is one of the few that has found commercial success. Their journey from small proof-of-concept to commercial success was exciting, to say the least. 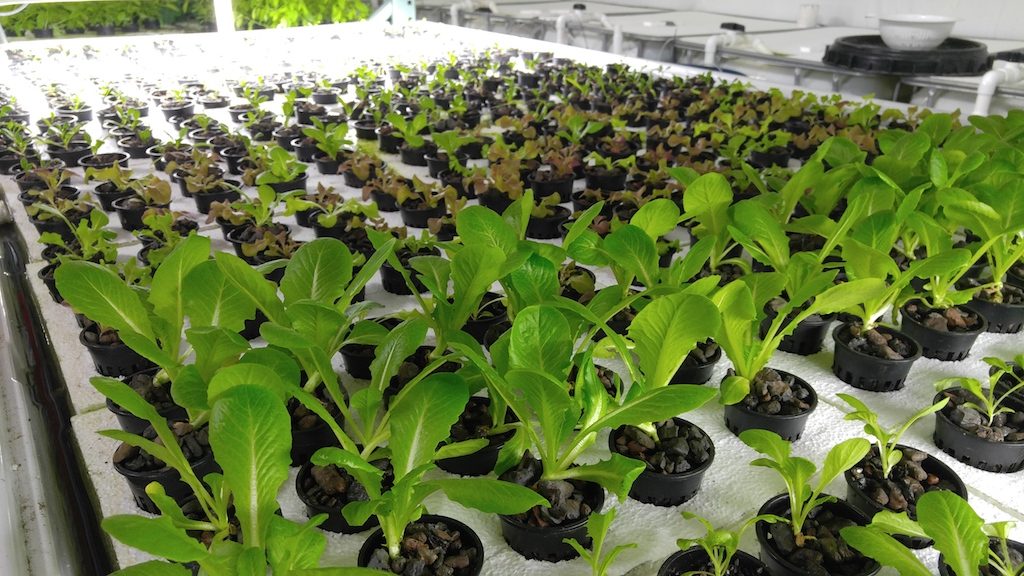 GSA was established in 2012 by chief operations officer Mathew Pollom. In 2013 and 2014, respectively, he brought on board chief production officer Brandon Hall and chief financial officer Dan DeBard. CEO Zachariah Chambers joined in mid-2015 and, by the fall of that year, the team started building the facility at the city’s historic Telephone Building.

While the team did an excellent job in estimating costs, they did not anticipate construction delays. “Building and ramp-up took about nine months longer than anticipated, resulting in money out the door with no revenue coming in,” Chambers recalls. “To keep things on track, we advise being 100-percent sure your build-out meets all codes and requirements and all pertinent parties are properly introduced to the project. Still, anticipate delays.”

One particularly large snag reared its head during electrical system installation. Two of the three required approvals went swimmingly, but a delay on the third put GSA about four weeks behind schedule. Chambers adds, “Things we did ourselves took much longer than anticipated, whereas contracted work with external experts was pretty much on time, so understand that unless you are an expert in construction, your schedule will slip if you choose to do it yourself.”

The GSA business plan stipulated that the greens side would be established first. (Among others, Aqua Greens in Toronto is also following this model.) “It’s a no-brainer,” Chambers explains.

“Lettuce has a very quick turn-around and it’s profitable. By July, when we have more plants growing, the entire business will be self-sustaining just based on income from the greens.” Sales of their salad mix greens — oakleaf, arugula, kale, Swiss chard and spinach — began in April to the firm’s sole customer, Baesler’s Market, in Terre Haute. GSA ships about 10 lbs to Baesler’s every second day as it ramps up production and, by around the end of 2017, it will reach Phase II with a maximum of about 100 lbs every second day. Expansion to the second floor, a rooftop greenhouse, and/or a second site may someday be in the cards.

And the fish? They’ll go to market sometime in 2018. “We currently have the tilapia in 27 IBC tanks, and we plan to have up to 5,000 in the system,” Chambers says. “We had to start with economical tank options. AnchorRight now, they are providing our nutrient load and when we’re ready, we’ll look at selling to grocery stores and restaurants, along with non-food markets such as pond maintenance fish.”

While some aquaponics ventures have each component of the business –fish and plants – being operated to maximize each one’s profit by giving plants fertilizer if needed, or by getting rid of excess fish wastewater through composting or field application, GSA operates holistically to achieve a balanced nutrient load. Chambers says they want to keep the system simple and consume everything that’s being produced.

Additional revenue streams were never a part of the core GSA business plan and still aren’t today. “We wanted to be conservative and achieve financial sustainability just from greens production,” Chambers explains. “However, additional revenue is coming from consulting, tours, and from sales of home aquaculture kits and components sourced primarily from Hydrofarm.” This echoes findings in the study “Commercial Aquaponics Production and Profitability” published in the January 2015 issue of the journal Aquaculture – that operations that sell equipment, offer consulting/educational services or integrate agritourism are the most profitable.

Other keys to success

Organic certification is listed as a big success factor for some aquaponics operations – not just for the premium price that organic fish and greens can bring, but also to secure demand. For GSA however, it’s not worth the effort. “For our market, locally-grown trumps organic, and people will buy Indiana-grown food over shipped-in organic vegetables,” Chambers says. “We are part of a hub of many Indiana-grown vegetable operations and we are very glad GSA greens are among the large number of locally-grown items that Baesler’s Market carries.”

Cost savings during greens build-out and production come from the use of induction lights, which are less expensive upfront than LED but have equivalent efficiency and nearly equal growing results, says Chambers. GSA has 36 of them, each one set up on a track with a small electric motor moving it back and forth over its designated plant bed. “We reduce the number of fixtures from four per bed to one, and we just have to run them a little longer,” says Chambers. “We also have our insect pest control ‘automated’ and done naturally through the release of a large number of lady bugs, green lace wings, praying mantises and so on.”

GSA has also reaped start-up cost savings by having only Pollam and Hall draw salaries (from full-time positions). Chambers, a professor of mechanical engineering at Rose-Hulman Institute of Technology, and DeBard, a retired accountant, have not yet taken pay, but will do so sometime in the future.

Lastly, Chambers advises that all aquaponics ventures involve a team with core expertise in fish, plants, operations, finance and marketing – ideally with expertise overlap – and with a performance-driven and dedicated mindset. “The light is always at the end of the tunnel but the tunnel just keeps getting longer as you hit challenges and obstacles,” he says. “And when that obstacle does present itself, you need to have a team, the team that doesn’t give up and digs down and makes it happen. Starting a business is hard, especially when it requires infrastructure and multiple levels of expertise. Aquaponics takes all of the challenges of hydroponics and aquaculture and elevates the difficulty. GSA has made it through the darkest parts of the tunnel and we are now in production!”