The walleye (Sander vitreus) is a favorite food fish and sport fish of millions of Canadians and Americans residing in the Great Lakes region and northern Great Plains. The flesh – white, firm, and mild in flavor – is very pleasing to most palates. 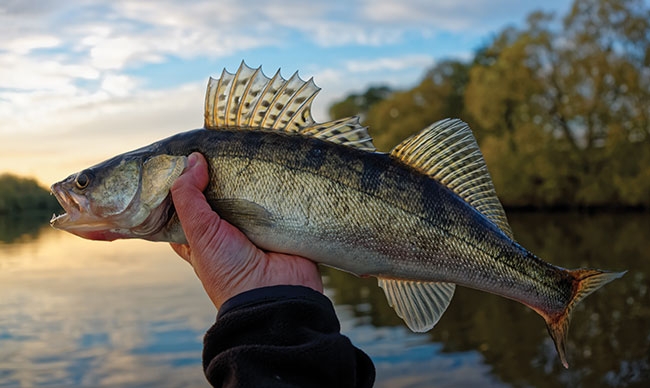 Although the walleye is not a great fighter, it is a very popular sport fish because of its favorable characteristics as a food item. The opening of the walleye fishing season is almost a state holiday in places such as Minnesota and Wisconsin. When I was a teenager in Minnesota many years ago, the start of the walleye season was an acceptable reason for skipping school for thousands of youngsters and their families in our area. Given nearly reverent respect for walleyes across much of North America, it’s reasonable to ask: “Why hasn’t the walleye become a major species for aquaculture?”

Before I offer some speculative answers to that question, I think a brief review of walleye biology and the history of walleye culture is warranted. Walleyes are considered to be a coldwater fish, which means they thrive in waters with temperatures lower than 24C, preferably less than 20C. Walleyes are basically carnivorous; they prey on others, including smaller walleyes. First-feeding walleyes typically feed on rotifers and cladocerans, however, one report from Ohio showed heavy consumption of diatoms (a group of algae). In the wild, walleyes begin feeding on smaller fish by the time they reach 10 to 15 cm in length and are completely piscivorous by the time they are 20 cm in length, although a thesis study in South Dakota showed that fingerling walleyes continued to feed on dense populations of large daphnids up to a length of 20 cm. When I first began studies on intensive culture of walleyes in the 1970s, experienced fishery biologists advised me to forget about it because walleyes would rather eat each other than pellets of formulated feeds.

Traditional walleye culture, as practiced at state and federal hatcheries, consisted of either feeding first-feeding fry slurries of rotifers and/or zooplankton in tanks or troughs, or stocking them into fertilized ponds that were managed for dense zooplankton populations. In all cases, pond culture began no later than the time the fingerlings reached 10 cm. The fingerling walleyes were generally stocked into public lakes by the time they reached a length of 20 cm. The first indications that walleye might accept pellets of formulated feeds came from Ontario in the early 1970s. This breakthrough stimulated research on all aspects of intensive culture by scientists and hatchery managers across the northern United States and southern Canada. Detailed discussion of the hypotheses tested, the results analyzed, conclusions developed, and recommendations produced are far too lengthy for a brief op-ed style article, such as this one. Readers interested in such details should obtain a copy of “Biology, Management, and Culture of Walleye and Sauger” (Bruce A. Barton, Editor, American Fisheries Society, 2011).

Rearing walleye under intensive culture systems to market sizes of approximately 1 kg can be done, but it has proven to be a task filled with many strange twists and turns in addition to a proclivity for eating their siblings. Research conducted by one of my graduate students in the late 70s, Luciano Corrazza, found a surprising link between their behavior and the intensity of light and the background color of the rearing tank: walleye fry are intensely photopositive and were so strongly attracted to the walls of the culture tank that they attached to the walls and did not feed. Neutral, gray-colored walls and uniform distribution of feed particles solved this problem. The behaviors and mechanics involved with initial filling of the fry’s gas bladders provided another set of issues that culturists have not experienced with traditionally cultured species such as trout and salmon.

A recent presentation by Gregory Fischer of the University of Wisconsin-Stevens Point’s Northern Aquaculture Demonstration Facility may bring the long-held dreams of walleye enthusiasts to fruition.  Fischer and his colleagues found they could rear walleye and hybrid walleye to market size (some fish reached 1 kg in 12 months) in an intensive culture system based on water recirculation and a domestic broodstock.  They were able to successfully manipulate spawning and hatching, then rear the resulting offspring to full market size.

Whether or not the systems and techniques developed by the researchers in Wisconsin, Iowa, Ohio, New York, and Minnesota will lead to economically successful production of walleyes, hybrid walleyes, saugeye, and/or zander, remains to be seen. Systems that are biologically and technically feasible are not always economically feasible.  For example, one of my former students developed a cage culture system to produce fresh walleyes for local markets in Iowa; however, cheaper, imported products from capture fisheries based in Lake Winnipeg and Lake Manitoba flooded the market and drove him out of business.

Walleye aquaculture that’s biologically and technically successful appears to have been developed.  Whether or not walleye culture can be economically successful remains to be determined. Yet another question is the potential effect of global warming – the warming waters could force walleye entrepreneurs to move further and further north.