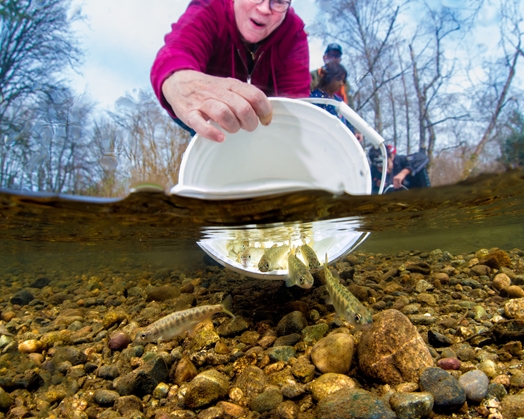 The IYS Photo Challenge was put on by the NPAFC to stimulate public interest in the IYS and to celebrate what salmon mean to citizens of NPAFC’s member countries, according to a statement from the NPAFC.

The topic of the Photo Challenge was “Salmon and people in a changing world.” Participants were also encouraged to incorporate any of the six themes of IYS: status of salmon, salmon in a changing salmosphere, new frontiers, human dimension, information systems, and outreach and communication.

Many outstanding submissions were received, making it very difficult to determine a winner, the NPAFC stated. The judges agreed that Lessa’s photo “Releasing some chinook fry in Surrey!” was the best representation of the challenge theme.

Fernando Lessa (1984, Brazilian) is an outdoor storyteller. With a degree in biology and a master’s in photography, Lessa has collaborated with many clients in the search for unique images, and more recently as a writer, publishing two articles on the National Geographic Brazil website.

Lessa has been a certified diver since 2004 and a fly fisherman for his whole life. He began his career as a photographic assistant in 2007, before becoming a full-time outdoor photographer in 2013.

With extensive experience in the field, Lessa has worked in a variety of areas, from the untouched Amazon forest to tropical and temperate rainforests in South and North America. In Canada, Lessa has run the Urban Salmon Project since 2016 and collaborates with brands, conservancies, and governmental agencies dedicated to protect the environment. The Urban Salmon Project is proud to have PATAGONIA and The Rivers Institute as official partners. Click here to view more of Lessa’s work.

The NPAFC is an international organization that promotes the conservation of salmon (chum, coho, pink, sockeye, Chinook, and cherry salmon) and steelhead trout in the North Pacific and its adjacent seas, and serves as a venue for cooperation in and coordination of scientific research and enforcement activities.

The NPAFC Convention Area is located in international waters north of 33°N latitude in the North Pacific, Bering Sea and the Sea of Okhotsk.  NPAFC member countries include Canada, Japan, the Republic of Korea, the Russian Federation, and the United States of America.