The first commercial scale indoor Atlantic salmon RAS facility in the US is up and running in Northfield, Wisconsin. 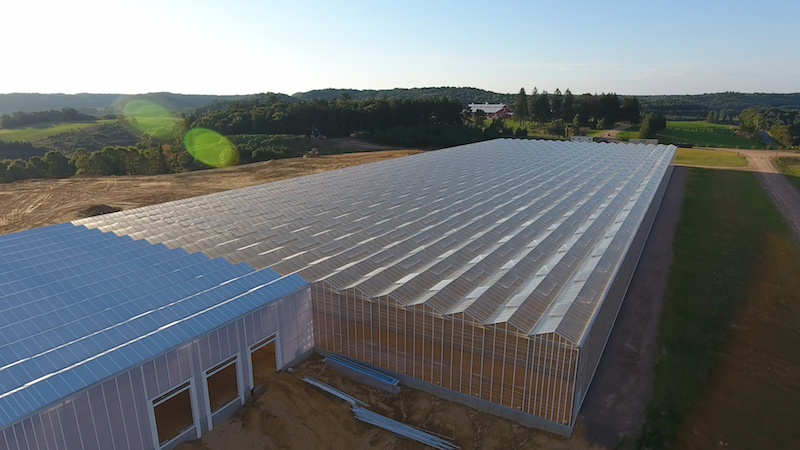 “Our initial cohort of year-old Atlantics are moving through the system,” says Superior Fresh COO Brandon Gottsacker.  “We expect to harvest them in the second quarter of 2018 at a target weight of 4-5 kilograms.”  Next door is a standalone glass greenhouse, where the company has just completed planting their first batch of leafy greens.

While the middle of Wisconsin may seem a strange place to be raising salmon, trout and lettuce, it makes sense when you consider Gottsacker’s background.

“I attended the University of Wisconsin Stevens Point (UWSP) focusing on Biology and Aquaculture,” says Gottsacker.  “I was intrigued by both the challenges and opportunities aquaculture presented.”  Shortly after college he received an internship opportunity at the Conservation Fund’s Freshwater Institute (FWI) in Shepherdstown, West Virginia.   The Freshwater Institute is known for their work with RAS systems for salmonids.  FWI’s team designed the Superior Fresh facilities and they, and UWSP Northern Aquaculture Demonstration Facility, continue to consult on the project.

Superior Fresh sits on 720 acres of family property that is being restored and managed as a native vegetation habitat.  The 40,000-square-foot “fish house” was completed in late 2016 and the 123,000-square-foot greenhouse, in early in 2017.

Gottsacker says their original business plan was for a 1,000-metric-tonne walleye farm.  “We realized that it would be very costly to deal with the phosphorus in the discharge,” he says. “We would have had to construct a waste water treatment plant.” The greenhouse solves that problem and creates an additional revenue stream for the company.

Two wells on the property provide 10C water, which is UV-treated.  Currently, the company is sourcing all-female Atlantic salmon eggs from Stofnfiskur in Iceland.  Superior Fresh received their first shipment of salmon eggs in January 2016 and expect the trout eggs to arrive in the next couple of months. They have incubation systems onsite and plan to keep the fish, from egg through to processing.

They aim to produce a wild fish in, farmed fish out ratio of zero, as defined by the Monterey Bay Aquarium Seafood Watch program. “To keep the diet sustainable, we are sourcing fishmeal and fish oil from trimmings collected from sustainable fisheries for the protein portion of our feed,” explains Gottsacker.  “In addition, all major ingredients are sourced from North America.”

Feed is the largest expense in an aquaculture operation, Gottsacker points out.  “Some producers look to cut costs on the important ingredients and you start to see the Omega-3s drop out, or the color of the fillets drop out,” he says.  “That lessens the quality of the fish.”

“We are working with a couple of different feed companies to develop specific recipes for our fish and plants,” says Gottsacker.  He expects a feed conversion ratio (FCR) of 1:1.  “Our timetable of two years — from growout to market-size — will be much shorter than other types of salmon farming.”

“We have about 350,000 gallons of water in our largest grow-out system in eight different grow-out tanks, each around 22,000 gallons,” Gottsacker explains.  The salmon and trout systems are completely separate, due to biosecurity. “We expect these systems will slightly differ in operations and water qualities.”

Aquaculture and hydroponics is how Gottsacker describes the decoupled system.  “We recycle a small amount of water between the two facilities.  We don’t have to worry about heating or cooling water as much,” he says. “It is really modeled after a commercial aquaculture facility and a commercial hydroponic facility.”

Not only are the fish and greenhouse systems in separate buildings, but fish production is not limited to the capacity of the greenhouse to accept waste. “Any additional waste that is generated from our farm is either land applied or composted for later use on conventional agriculture land,” Gottsacker says. “Nothing is wasted.”

“Our hydroponics greenhouse is a deep-water culture growing application, with nearly 100,000 ft2 of growing space,” says Gottsacker.  “The greenhouse temperature is maintained with an advanced hydronic heating system and 1,100 LED’s provide the lighting.” The European greenhouse design is intended for northern climates. “We are looking to maintain a year round growing environment of 65-75’F.”

“Our anticipated production of about 4,500 lbs of leafy greens and herbs a day will reach out to approximately 700 grocery stores between Minneapolis and Chicago,” says Gottsacker. “We plan to harvest between 16-40-day-old plants depending on the variety.”

“Today, there are not very many options in this part of the country to purchase fresh, local, healthy produce, especially this time of year,” Gottsacker says.   “Superior Fresh also plans to pursue USDA organic certification for all its leafy greens.”

Aquaculture North America (ANA) spoke to Gottsacker during a break from his presentations at the recent Vegas Food Expo.  He was showcasing Springhill Atlantic salmon raised at the Freshwater Institute’s research facilities, while he is waiting for his own fish to reach market size.  “The chefs are in love with it,” says Gottsacker.

“We are raising the most premium salmon in the world.  The pristine water and the absence of antibiotics or pesticides, is something today’s consumers are demanding,” says Gottsacker.  “Today, our prices will reflect those husbandry practices, although the goal is to grow the best, healthiest food in the world and make it affordable for everyone.”