Kumamoto oyster takes three times as long to grow, but it always delivers 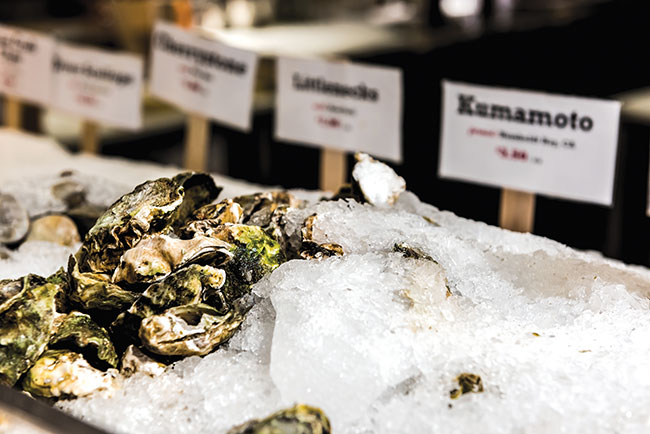 Although more expensive than other oyster varieties, Kumamoto oysters are a favorite of many consumers Photo:©Andriy Blokhin/Adobe Stock

“The small and tasty West Coast Kumamotos are always popular for two reasons,” says Steve Sancimino, owner of the Swan Oyster Depot in San Francisco. “They are creamy with a briny flavor and customers love the small size.” Not to mention the very deep cup that holds its juices.

More than 75 years since Kumamoto (Crassostrea sikamea) oyster seeds first arrived in the United States from Japan, “kumies” have cemented their place in tahe market. Washington State-based Taylor Shellfish Farms, the largest producer of farmed shellfish in the US, says they share the top rank as “many people’s favorite” along with tide-tumbled Shigoku and Fat Bastards.

“They tend to be in nice condition for eating raw throughout the year,” says Bill Dewey, director of public affairs at Taylor Shellfish. “They require warmer temperatures to condition and spawn than Pacific oysters so they stay firm and marketable well into the summer. They are one of the more expensive oysters mainly because of their long grow-out period compared to the other species.  As a result, there are more costs in producing them as far as tying up ground, crop maintenance, etc.”

Seed production can be challenging for all species and Kumamotos are no different. “We have good and bad years with Kumamoto seed production and, as is most often the case, we struggle to understand the reasons,” says Dewey.

Farming methods are similar to other bottom cultured oysters.  Seed production starts in the hatchery and transitions to a floating upweller system, or “flupsy,” a nursery in open water where they stay for a period of time until they are large enough to survive being out on the farm for growout.  The process takes three to four years compared to 12 months for Pacific oysters.

Taylor has a site dedicated to growing Kumamotos. The Chapman Cove site in Oakland Bay, WA has lots of food available for the oysters. Two crops are farmed on the site: Manila clams are growing in the ground under the Kumamoto crop. Once the oysters are harvested, a clam-digging crew harvests the clams then reseed the site with both crops to start the cycle again.

In the early days, scientists discovered that the small oysters hybridize with Pacific oysters (Crassostrea gigas). This made true Kumamoto broodstocks very difficult to find. Taylor Shellfish went back to the Kumamoto prefecture in Japan to secure true Kumamotos, rearing them through F2 generation in quarantine at the Oregon State University to address any disease concerns, then bringing them to the Taylor hatchery to produce true Kumamoto seeds.

It took two trips to Japan to accomplish this.  The first year ended with the discovery – upon returning with what appeared to be Kumamotos – that they were actually hybridized.  They went back a second year and did the genetic analysis before returning home with them.

“Beyond the initial challenges of securing true Kumamoto seed I would say they are not  harder to grow than other oysters,” Dewey says.

“The best part of raising Kumamotos is the harvesting schedule. We can harvest them year-round, and I feel they are at the best quality in late Fall through early Spring.”