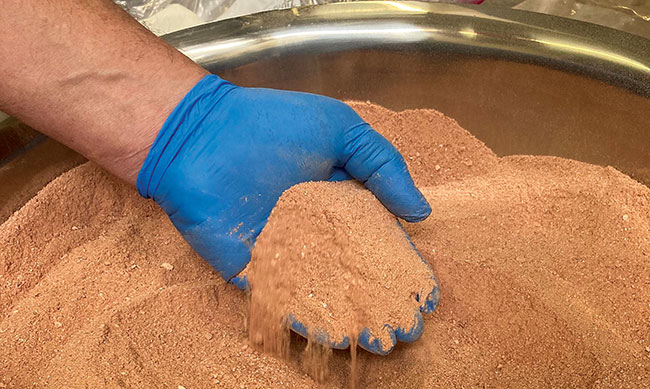 Protein flour from Silicon Valley’s NovoNutrients is made from waste CO2 emissions with the help of natural microbes and industrial biotech. Skretting is testing the feed material Photo: Novonutrients

The growing production of alternative proteins and oils for fish feed attests to the growing market demand and a deepening understanding of climate change, but they will remain a small fraction of the market until there’s enough production available, according to a key player in the sector.

“We are talking about making changes in a nutrition system that has evolved over 10,000 years. And as fast as things are moving today, there’s still a tremendous number of plants to build whether you’re Veramaris, Calysta or NovoNutrients, Innovafeed or others,” said David Tze, CEO of Sunnyvale, CA-based biotech firm NovoNutrients told participants in a webinar on feed alternatives hosted by Intrafish in April.

The growth of the alternative feed industry is dependent on production scale, he stressed. Mulling a scenario 10 years from now, Tze said the market share would remain on the low side.

“I’d say that we’re still looking at less than 10 percent for alternatives on the protein and lipid side. That could be massive in dollar terms. But as a fraction in the maths, it is still going to be small.”

The increased investment in the sector seen in recent years bodes well for the sector, however.

As it is, aquaculture already has the lowest carbon footprint in the animal protein industry. But innovations in feed that will reduce reliance on capture fisheries for feed ingredients will advance its sustainability further.

A “smart business model” has enabled the French biotechnology company to produce insect protein with a lower footprint than an existing model, said Ray. “Today, we have a much lower biodiversity path compared to some of the fishmeal (users) and we have half of carbon footprint compared to fishmeal.”

Following the construction of its first production site in Gouzeaucourt, France, in 2017, Innovafeed inaugurated in 2020 a second facility, in Nesle, France. This site is the world’s biggest of its kind, with a target capacity of 15,000 tons. Construction of a third plant, a 60,000 ton-facility in Decatur, Illinois, is scheduled this year. The plan is to have 20 production sites by 2030.

It is constructing its first world-scale plant in China, which it expects to be completed next year. Its Initial output of 20,000 tons will be increased by 80,000 tons in the second phase. The California-based biotech firm has smaller facilities already in operation in Memphis, Tennessee and in the UK.

Dutch-based firm Veramaris, which produces a namesake marine algae oil at its facility in Blair, Nebraska, said one ton of its algal oil provides as much EPA and DHA as 60 tons of forage fish.

The company has always maintained that the presence of EPA and DHA molecules in the Veramaris oil makes it “the only one capable of truly replacing fish oil” in aquaculture feed. 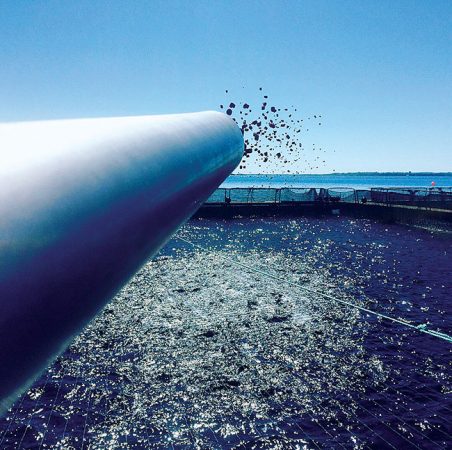 The massive capital being poured into the alternative feed segment speaks to investors’ belief in the growth of aquaculture, said an expert Photo: Cole Munro

“EPA and DHA the are two of the most important nutrients in both animal and human health. Veramaris has innovated a solution to that,” said Ian Carr, Global Business Development Director.

California-based NovoNutrients produces alternative protein ingredients by utilizing CO2 emissions from industries. Such products — protein derived from cells of microorganisms such as yeast, fungi, algae, and bacteria — are known as single-cell proteins (SCPs).

“This is unique to this particular production of this single-cell protein. And that’s important because it creates a totally distinct cross-structure that is based on emissions and, ultimately, renewable energy to generate hydrogen, which is the chemical energy for the fermentation.”

In September 2020, NovoNutrients shipped the first product sample of its bacterial protein meal to Skretting so the aquaculture feed manufacturer could test whether it has what it takes to go commercial. “The explicit goal is striking a procurement contract through which Skretting would commit to purchases of NovoNutrients’ feed ingredients,” the two companies said in a statement.

Robert van den Breemer, procurement director at Skretting, said the biggest challenge for startups like NovoNutrients is in scaling up production so that they achieve a competitive price. He said Skrettting’s involvement will help speed up NovoNutrients’ path to large-scale manufacturing.

“We know that financing first-of-a-kind ingredient factories is hard for start-ups and, via the range of different agreements we can apply, we hope to break that limiting cycle and signal to the world which innovators we think have what it takes to go commercial and get big,” said van den Breemer.

“Land and water use is way more important than just carbon footprint,” Shaw said, adding that one metric ton of FeedKind can replace a ton of soy protein, a widely used protein alternative to fishmeal.

To illustrate the sustainability of producing FeedKind versus soy protein, Shaw said: “Our world-scale plant will produce 100,000 MT of FeedKind a year. If it was soy protein, the land needed to produce an equivalent amount of protein would be the size of Chicago. Yet our 100MT-FeedKind plant can sit on six football fields.”

(With files from Liza Mayer)