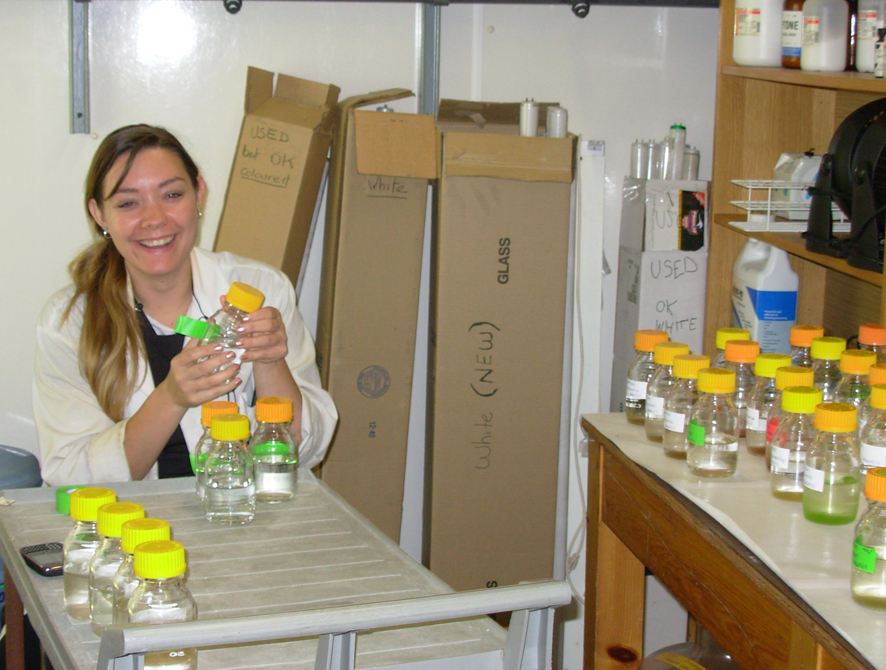 John Batt, manager of Dalhousie University’s Aquatron Laboratory, located on the University Campus in Halifax, Nova Scotia, has been a colleague and friend since the late 1980’s when he worked on a bay scallop (Argopecten irradians) project of mine at the old fisheries lab, (long-since torn down) on Halifax’s Lower Water Street. Later, John worked for six years with Sambro Fisheries, conducting early research into the breeding and culture of winter flounder, cod, pollock, haddock, and halibut. Then, the Manager’s position at the Aquatron opened up, and John moved back into Academia in 1999. I had heard that the Aquatron was undergoing a refit, so it was with great pleasure that I was able to accept John’s invitation for a private guided tour.

The Aquatron was first opened in 1974, the brain-child of Dr. Carl Boyd; it was first conceived in 1963 by Dr. F.R. Hayes and Dr. Walter Trost, who felt that a major university in a coastal city should have an Ocean Sciences Centre that allowed laboratory-based oceanographic research to be conducted by scientists of a wide range of disciplines. And that is how it has turned out to be. The original structure comprised two large tanks, one – the Pool tank – 50-ft (15.24 m) diameter by 12’10” (3.91m) deep, and holding 684m3 (150,000 gallons) of water. The second – Tower tank – was designed to offer a full atmosphere of pressure at the bottom and is 3.66 m (12’) in diameter by 10.46 m (34’4”) deep and holds 117,100 litres (25,750 gallons). The pool tank was designed to house marine animals such as seals and turtles, or large fish, and for testing marine instruments. At one point it was re-fitted as a rocky shore habitat to study lobsters and sea urchins in a controlled environment. The Tower tank can be controlled to offer three distinct layers of water, each with different physical parameters. Water can be sampled through ports in the tank wall of the tank, and activity within the tank can be observed or recorded through viewing ports. There are a number of wet laboratories (17 in all) associated with the complex, all receiving fresh or salt water, and water was also furnished to a large aquarium in the Biology Department, and also to the Psychology area. The original intent was for all the water to be recycled, but forty years ago the technology was not sufficiently developed, and it is only now that a full recycling capability has become a reality.

And that is how things have been. The first major upgrade was in the 1990’s when the pump-house was re-furbished and a stand-by generator installed. The most recent upgrade began about 3 years ago, and represents the first major increase in capacity.

Sea-water is drawn from the Northwest Arm, and pumped over 400 meters and nearly 50 meters vertical lift to the basement of the Aquatron. There, a series of four new sand filters, and UV irradiation produce gin-clear, sterile seawater. Ten individually controllable heat exchangers offer a range of temperatures for water delivered to the individual labs. Heated water leaving each of the wet labs can be recovered and used to preheat incoming seawater. The control system (Johnson Controls, who were also the primary contractors) has been completely changed: variable speed drives have been added to the main circulation pumps, all controlled via a new computerized motor control centre and electrical panel.

John was quick to point out that the actual pumping capacity has not changed, but the quality of the incoming water has improved significantly, and the addition of the recycling systems, of which there are 16 allows the overall carrying capacity of the system to be much increased. The recycling units or RASs consist of a sump, variable speed pumps, sand filters, heating, chilling and UV disinfections. These were designed and built by Aqualogic in San Diego, then shipped to and assembled in Halifax. The entire system is controlled with an onboard computer, which also communicates with the Aquatron’s main computerized monitoring system. Each of the 17 wet labs in the Aquatron can be supplied with fresh- or seawater which can be heated or chilled. Wastewater from each lab can be directed to a recycling unit, heat recovery, regular waste of wastewater disinfection.

Dalhousie buys its fresh water from the city, and costs inevitably are increasing. Fresh water withdrawal capacity is 250 usg (950-litres) per hour, unchanged from before. Incoming water is de-chlorinated through a series of carbon filters arranged so that flow can continue uninterrupted should a filter require servicing. Additional de-chlorination is offered for experiments with salmonids, which, it seems, are particularly sensitive to chlorine concentrations at or above 0.04mg/l. Again, the recycling systems allow overall carrying capacity to be enhanced by 80%, so the volume of fresh water actually purchased can be reduced – more with less. Overall, the goal of the renovation is to drastically reduce the amount of freshwater being used in the facility with additional gains in heating and chilling efficiency.

Incoming water temperatures are of course those found naturally, cooler in winter, warmer in summer, but the heating and cooling systems, and heat exchangers allow water to be delivered to the labs at more or less any temperature between 3 and 30°C. (Zero°C is just possible if other chilling demands are low). Incoming salt water from the Northwest Arm is at 31-32%, so any blend with fresh water is possible. It is also possible to adjust the pH within an individual RAS, since pH is monitored. And some pH-related fresh-water experiments have been conducted.

There are 17 separate labs of varying sizes and with different tank configurations in the Aquatron building, and other labs in the Biology Department. In total some 25 different experiments or holding conditions could be set up at the same time. The maximum number of individual projects to date is 23, indicating the wide range of experimental possibilities. John commented that he felt this would be difficult for any other lab to match, anywhere.

Besides providing laboratory space, the Aquatron offers some specific services and products for sale. Prime among these is the plankton service. A range of phytoplankton species is available, as well as rotifers and copepods, and they are experimenting with some fresh water species such as Daphnia. And of course, fish. Zebra fish (Danio rerio) are in high demand as a model organism used for a range of medical and physiological research, as are medaka (Oryzias latipes) the Japanese rice fish, which is used extensively for research in Asia. Recent changes in Canadian regulations have made these fish more difficult to import, and the demand on the Dalhousie service has accordingly increased significantly.

One particularly impressive lab had huge tank full of tilapia all earmarked for medical research. Dr Bill Pohajdak from the Biology Department, and his colleague Dr James Wright, currently at University of Calgary, are conducting diabetes research. The tilapia have been modified with a gene for producing human insulin, which can be easily recovered from the fish.

A second, equally intriguing project is that of Dr David Scott, of the Earth Sciences Department at Dal. This is a self-contained salt marsh, with a genuine tidal cycle. The principal purpose is the study of foraminifera, which are quite localized to where on the marsh they can survive. Part of the long-range goal of this work is to look at the effects of disturbances to the marsh (oil spills for example) and how species do or do not survive. It’s also a good source of specimens for micro-paleontology classes.

The total cost of the upgrade was $4.9 Million, from Dalhousie University internal funds.

Two hours was not enough to get more than an idea of the complexity of the operation, and the research opportunities it provides, so for those readers who wish more information, contact John Batt at: john.batt@dal.ca.