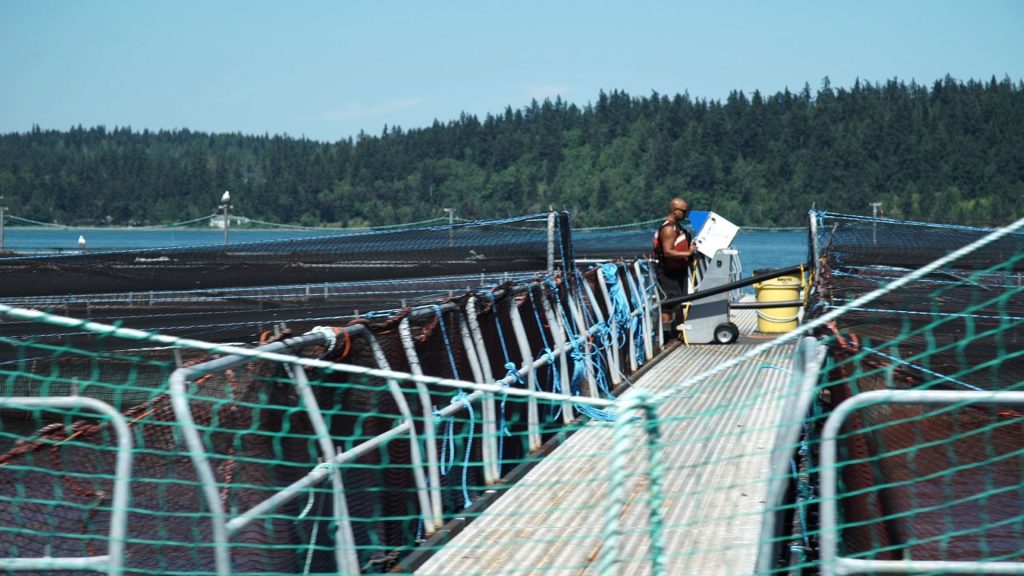 Fish farm associations are finding ways to build relationships with consumers and earn their trust.

In Nova Scotia, Canada, 30 people protest outside of a government meeting on aquaculture regulations. In Delaware, a group of homeowners petition the government to limit aquaculture operations due to fears about the industry. And, in numerous locations, aquaculture producers find themselves in conflict with traditional wild fishermen.

While it would be tempting to view these incidents as being evidence of a larger public concern with the aquaculture industry, the truth is far more nuanced. Support from the general public fluctuates wildly from region to region. Regardless, how does the industry go about changing minds and countering the misconceptions and misinformation that is out there?

“The challenge is always the reality versus the perception,” says Pamela Parker, Executive Director of the Atlantic Canada Fish Farmers Association. “The reality is that salmon farmers have built and maintained their industry for decades in Canada through partnerships with local communities, traditional fishermen and others. But there is a small, but vocal, anti-aquaculture activist group that would have you believe that the industry doesn’t have social licence and that there is a big debate. And, often, they go out of their way to use false information to undermine public confidence.”

The idea of a small, but vocal, anti-aquaculture voice was also mentioned by Roberta Stevenson of the British Columbia Shellfish Growers Association. However, while Parker indicates that anti-aquaculture voices in the Atlantic Provinces do not represent what the average person thinks about the industry, Stevenson believes that the “naysayers” have been much more effective in swaying public sentiment in British Columbia.

Jeremy Dunn, Executive Director of the BC Salmon Farmers Association, however, feels that most British Columbians do not have an inherently negative view of the industry. Dunn says that research has shown more curiosity than outright negativity – which is supported by consistently strong sales of farm-raised salmon in the region.

“Our data shows that, by in large, most British Columbians want more information about salmon farming and about BC farm-raised salmon,” says Dunn. “Our members recognize that activist campaigns have had an effect on how people perceive their operations and have taken significant steps to work with independent, third-party certification systems to demonstrate their practices.”

Just to the south, in Washington State, the situation is even more difficult. Dan Swecker, retired Senator and member of the Washington Fish Growers Association, says the anti-aquaculture sentiment in his area originated with traditional fishermen and was eventually picked up by the Earthjustice Legal Defense Fund.

“They contacted neighbourhood groups and offered to provide legal support to those who chose to challenge permit applications,” says Swecker. “They did not successfully prevail against any applicants but with all the appeals they made it so expensive that no one has applied for a new permit since 1987.”

Further south to California finds an aquaculture industry that also struggles with misinformation. Gregg Leonard, owner of the Freshwater Fish Company and a member of the California Aquaculture Association, says that the average California resident doesn’t understand the industry and believes that farmed fish are somehow inferior to wild fish. “There’s been a lot of propaganda in the past,” says Leonard. “The wild fishing industry spent millions of dollars bashing farm raised fish.”

Getting the right message out is a challenge

“We think there continues to be a good opportunity for dialogue about the contributions of the industry to the economy,” says Angela Bishop, Executive Director of the Aquaculture Association of Nova Scotia. One of Bishop’s key areas of focus is in creating relationships with the traditional fishermen who are often in opposition to the industry. “It is possible to have those conversations. We’ve been getting out to fishermen’s forums and meetings where we can develop more and deeper relationships with other resource users in the province.”

Executive Director of the Maine Aquaculture Association, Sebastian Belle, agrees saying that the favourable view of aquaculture in Maine (90 per cent approval, according to their polling) is a result of hard work aligning themselves with the commercial fishery and grassroots education efforts. Belle has found those relationships to be essential in keeping opposition groups from creating animosity between aquaculture and the wild fishery sector.

“They’re driving a wedge into the very heart of the working waterfront,” says Belle. “I think it does a tremendous disservice to the commercial fishing community.”

Social media is potentially a missed opportunity for the industry. While many organizations make an effort to engage with social media, others fail to see the benefits. John Billian, Vice-President of Business Development for Florida Organic Aquaculture, however, feels that social media is only going to get more important going forward.

“This is how people like to get their information now,” says Billian. “We can’t force them to get the information the way we want them to. We have to go where they are and engage them the way they want to be engaged.”

“You can’t bring everyone to your farm,” says Michael Passmore, president of Passmore Ranch and a member of the California Aquaculture Association. “So you have to figure out how to engage in that relationship and build trust and to ensure they have confidence that what you’re producing is of high quality.”

The bottom line appears to be public education, however – finding a way to directly transmit accurate information about the industry and to allow the community to truly understand aquaculture operations.

“Community engagement is so important,” says Dunn. “People need to know our farmers, see how they raise high quality salmon in a healthy environment, and to have an opportunity to taste how good BC farm raised salmon is.”

Members of the California Aquaculture Association mentioned taking part in the state fair and other events. Dan Swecker in Washington maintains a website to promote information on the industry. True North Salmon have partnered with celebrity chef Rick Moonen to get their message out. In Maine, Sebastian Belle says he has gone door to door answering questions in communities with contentious aquaculture issues. And farms all over the continent regularly get engaged with local education – visiting schools and taking classes to aquaculture facilities for tours.

“Social licence is something that is earned and maintained at the community level,” says Parker. “We are educating people about how we farm, what we do to protect the marine environment and how we bring prosperity to coastal communities while growing one of the world’s healthiest foods.”