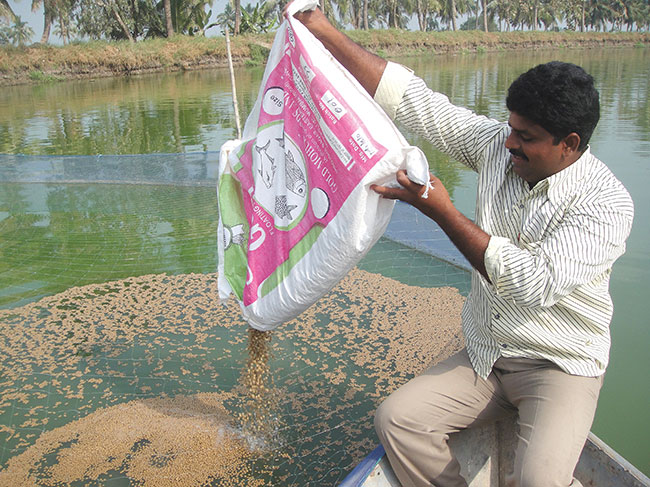 Feeding fish in a net pen in India. Production of crop feed materials is the highest generator of GHG emissions in aquaculture Credit: FATP 609/ R. Ramakrishna

Global aquaculture accounts for a modest amount of greenhouse gas emissions compared to terrestrial livestock farming but one way it could reduce its footprint further is by looking at the biggest source: feed production.

According to a paper released recently by the Food and Agriculture Organization, production of crop feed materials accounted for 39 percent of total aquaculture emissions in 2017. This figure increases to 57 percent when the emissions arising from fishmeal production, feed blending and transport are added.

“Feed is the main source of emissions in most systems, so some of the reduction can be achieved before we even get to the fish farm, in the production of feed materials,” said Dr Michael McLeod, one of the authors of the study, “Quantifying greenhouse gas emissions from global aquaculture.”

“It is such a dynamic and fast-growing sector. While the emissions from fish farming are unlikely to reach the profile of, for example, beef farming, if there are ways of reducing emissions while improving financial performance, why not use them?” added McLeod, a climate-change research scientist at Scotland’s Rural College.

East and South Asia produced the most aquaculture products in 2017 with 57,633,000 tons and 8,401,000 tons, liveweight, respectively, and they also produced the highest emissions. This pattern was observed with the production of most species groups.

However, finding which one would be most cost-effective would depend very much on where one is starting from, for instance, the species and farm location, said McLeod. “Aquaculture is a very diverse sector; you’re dealing with a lot more species than terrestrial farming for a start.”