From crisis comes resilience and opportunity for salmon farmers 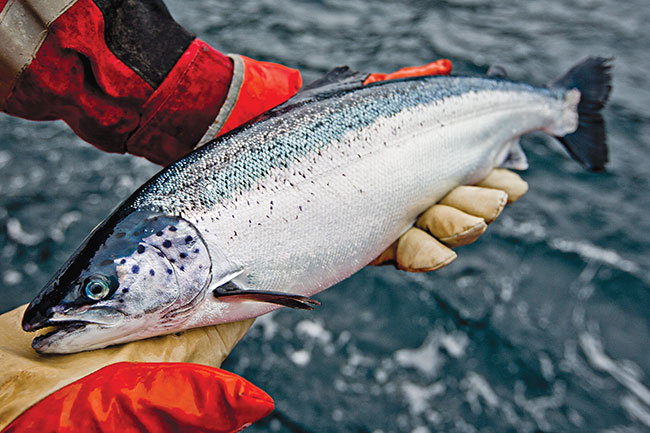 Leaders of associations that represent the industry in North America found a silver lining to the coronavirus pandemic, with demand for salmon emerging in better shape than other sectors supplying the foodservice industry.

“It’s been tremendously positive in the face of a very challenging situation,” says John Paul Fraser, executive director of the British Columbia Salmon Farmers Association. “I’m so impressed by everyone’s resilience – this group of people is determined to make improvements and see things through.”

On the other side of the country, Newfoundland Aquaculture Industry Association (NAIA) executive director Mark Lane says the global crisis has allowed the sector to promote salmon farmers’ importance to the economy.

“I feel COVID-19 has further united the industry, locally, regionally, nationally and internationally,” he says. “Since the beginning of COVID-19, we have been participating in regular stakeholder meetings. These meetings enable the industry to speak directly with all key decision-makers in the federal and provincial governments.”

Salmon farmers were declared an essential service by authorities early on in the pandemic, which was vital especially to those workers in small communities who depend on jobs in the sector. In British Columbia alone, salmon farming is responsible for 7,000 direct and indirect jobs, and more than two-thirds of Canada’s farmed salmon production occurs in BC.

“I think being designated an essential service by the government really helped people get a sense of confidence that what they were doing matters, and that was a boost for everyone,” says Fraser. “But that doesn’t mean it was easy, it was really hard, and in some cases expensive to make adaptations. There is a lot of uncertainty when you don’t know when that next delivery of PPE [personal protective equipment] is going to arrive or what you actually need to be in compliance.”

Compared to shellfish farmers, and despite a glut of product on the market from other jurisdictions such as Chile, salmon farmers are emerging from the first six months of the pandemic somewhat better than other seafood producers.

“Salmon probably came through a little better although the displacement in markets worldwide has caused a lot of overseas product to come into the United States. That has made it a competitive-price climate for our salmon folks,” says Sebastian Belle, executive director of the Maine Aquaculture Association.

Supply chain disruption
For many companies, the challenge was finding new ways to get their product to market, which involved starting delivery companies or direct distribution to consumers via the internet. Some even started selling to local farmers’ markets, while others launched marketing campaigns.

Developing new marketing plans to promote local products is a priority for salmon farmers on the East Coast, says Tom Smith, executive director of the Aquaculture Association of Nova Scotia.

“That’s a silver lining of COVID – we’ve started to work on direct-to-consumer marketing. In fact, our salmon farmers have a very vibrant direct-to-consumer marketing campaign launched during COVID through True North Seafoods,” he says. “That has opened a channel we didn’t have before. We needed to look at new supply chains, and our salmon farmers are addressing that.”

Market forces create challenges
Smith is concerned the large amount of salmon in the market now will hurt the industry’s overall health over the next year.

“It’s been tough for worldwide supply and in Nova Scotia we have some dumping going on, specifically Chilean salmon that have come into the market priced way below what it should be. It’s going to jeopardize the profitability of the industry,” he says. “The salmon industry is a very profitable industry worldwide, but dumping product flies in the face of that and isn’t good for the future sustainability of the industry.”

Smith says there are signs the market is starting to bounce back.

“Harvesting continues on a planned schedule, but it is a struggle to make sure there is a market for those products. At the same time, smolts are being brought in and getting ready for the 2021 season and beyond, so the market has to adjust.”

Optimism about 2021
In Newfoundland, two of the largest construction projects on the island are aquaculture related, says Lane of NAIA.

In August, the province elected Andrew Furey as Premier, and Lane says the association has spoken to him about the industry’s importance to the people in coastal communities.

“As a politician, he needs to fully understand the importance and contributions that our industry makes to this province,” says Lane.

Looking ahead, Lane says one of the highest priorities is to continue community outreach and to educate the general public about the industry, its sustainability, environmental friendliness, as well as its contributions to the economy and food security.

“Early in the new year, we will be launching Aquaculture 101 (aquaculture101.com). With a world-class website, online learning resources, courses, VR and 360 immersive learning experiences, this portal will be one of the world’s most comprehensive online learning platforms related to aquaculture,” says Lane.

The largest ticket item that had to take a back seat for the association in Newfoundland was co-hosting a conference with the World Aquaculture Society and Aquaculture Association of Canada.

“We were anticipating close to 2,000 people descending on historic St John’s to host Canada’s largest-ever aquaculture conference,” says Lane. “Of course, we were all very disappointed but like in all aspects of our day-to-day business, it’s safety and people first. Postponing the conference until September 2021 was the responsible course of action.”

Support services for farmers in Maine
Belle says in Maine, association members currently don’t have plans to curtail production at this point.

“If the COVID situation is unresolved and vaccines aren’t developed, and if the restaurant industry, in particular, doesn’t recover, then you may see some impact in terms of what people are choosing to seed out on the farms, but there is no real way to respond to that in the short term,” he says.

The Maine Aquaculture Association will be providing financial management support to farmers as they manage through the balance of 2020 and into next year.

“We are definitely shifting some of our priorities. We are ramping up financial and business management services in particular for new farmers who don’t have the financial reserves to weather a downturn in the marketplace, focusing on risk management skills to help them survive in a down period,” says Belle.