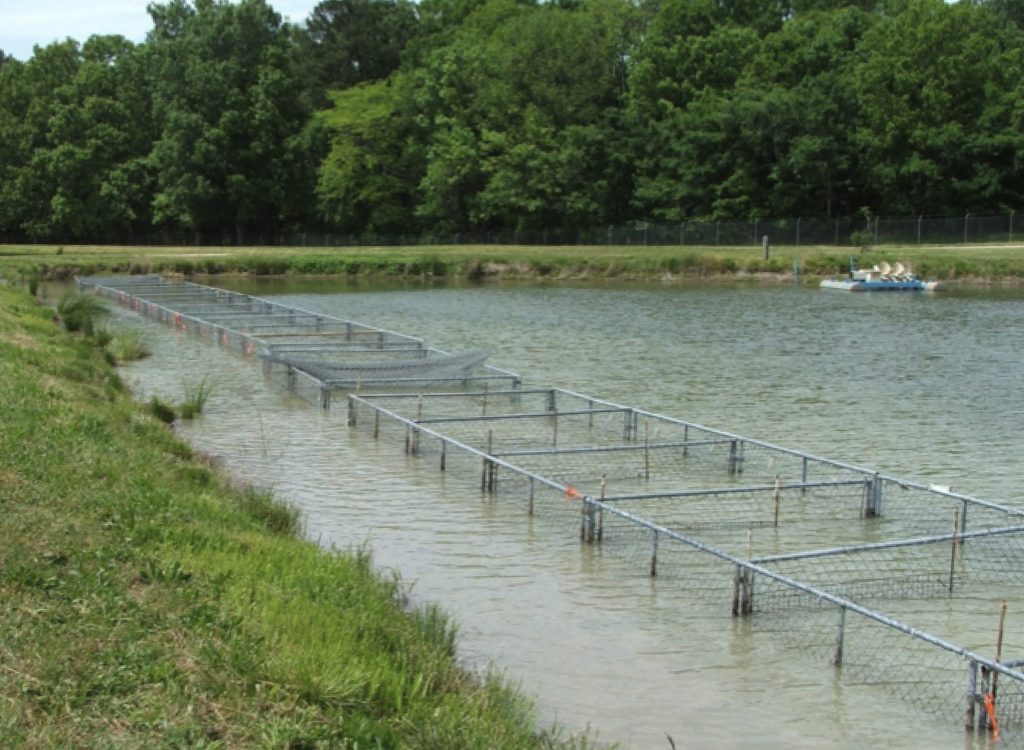 Typically at the Hulsey hatchery, broodstock bass pairs are placed into the earthen ponds at a rate of 10 to 12 pairs per acre for spawning in March, and are removed when the fingerlings are harvested in June/July. This practice has been used primarily because labour requirements for this technology are relatively low, and the labour-intensive culture of striped- and hybrid striped bass takes place at the same time.

In 2009 the first limited trial of mat-spawning was conducted at the hatchery with the objective of determining whether enough fry could be produced by mat-spawning to meet the annual stocking request.

The broodfish selected were six years of age and were paired and placed in cages. The cages measured 6’ x 5’ x 2.8’ (1.8 x 1.5 x 0.85 m) and had earlier been used for spawning blue catfish. Spawntex matting was cut into 18” x 24” (45 x 60 cm) rectangles, rebar ballast was attached to bottom of mat with plastic ties, and one mat was placed with a spawning pair in each cage.

Mats were placed at water depths of 18”-24” and they were checked daily and those with spawn were retrieved, stacked one upon another in a hauling tank containing fresh water with 200 ppm H2O2 as a disinfectant, and transported to the hatchery. The fish were allowed to spawn twice before being retrieved, retired, and replaced by a new breeding pair.

Egg-laden mats were suspended vertically in water-filled vats with a flow of 2 USgpm (7.6 l/min), continuous aeration, and disinfected daily with 100 ppm H2O2 until hatching. The vats were screened with saran filter cloth to prevent fry escapement from vats during hatching and harvesting.

Water pumped into the vats during hatching was filtered lake water from Lake Hamilton, the water source for the hatchery.

No more than three consecutive days’ egg-takes were in any one vat. The eggs hatched directly from the mats and were harvested and enumerated after seven days. Half of the fry were vaccinated against Flavobacterium columnare before being stocked into the ponds at a rate of 100,000 fish/acre (247,000/ha).

The fish were harvested from the vats at 7-10 days post-hatch. During this time they were still absorbing the yolk-sac. At 7-10 days post-hatch harvesting was conducted by slow draining the vats and harvesting the fry with soft fine mesh dip nets. Fry were enumerated, vaccinated, and stocked into fertilized earthen ponds for growout. The fish were harvested from ponds once they reach approximately 40 mm in length and then were stocked into public water bodies.

Some of the fry were vaccinated before being stocked into the growout ponds, and paradoxically in each of the three years reported, the non-vaccinated fish showed significantly higher survival rates (52.3 vs 26.3%) when harvested as fingerlings.

The intensive mat-spawning technique clearly allows for large numbers of fry to be produced in a relatively short time frame. But there are still some issues to be addressed. For instance, there was initially no means of controlling the temperature of the hatching tanks; this has been rectified by the installation of a heating system.

There was also difficulty in harvesting the fry from the vat. Mesh liners were sewn to line the vats to facilitate harvesting, but the mesh was not small enough to prevent fry passage. Survival from fry to fingerling stage is also very variable. All these issues are continuing to be addressed by biologists at the facility.