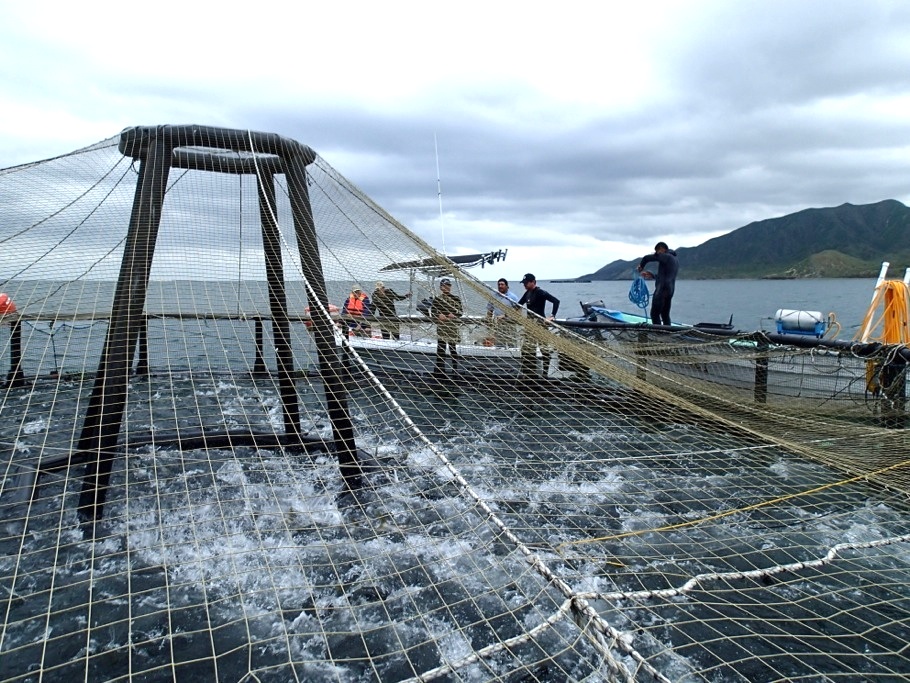 A group of biologists and business professionals from four continents form a company to bring more offshore aquaculture to North America. The company's yellowtail hatchery and farm are located on the Baja Peninsula.

Luis Astiazarán aims to build a white-tablecloth market in the United States for his farmed Baja yellowtail one fish at a time.

The CEO of the Mexico-based Baja Seas runs a farm and hatchery business growing the native yellowtail (Seriola lalandi) in pens anchored off the Baja Peninsula in Mexico.

“The show was great. It was perfect timing to announce at the show. We are very happy because the project is new,” he said. “We went from zero to putting fish to market in two years. Hopefully we get to a steady 2000 tons annually in two years.”

Baja Seas was founded in 2012. The company wanted to establish their hatchery and farming protocols before they went public with their launch in Boston.

“We hit commercial size in March,” he said. “We have been focusing on doing it right and finding a solid base for the company to launch from. We didn’t want to overstock, or overshoot our goals. We know there is a long way to go.”

Baja Seas evaluated the current state of offshore aquaculture in North America, conducting a market study and identifying the best locations to establish a high-value marine finfish farm startup in waters off the Baja peninsula.

The company is comprised of a multidisciplinary group of biologists and business professionals from four separate continents.  They wanted to bring more offshore aquaculture to North America, but didn’t want to select a fish that was already a commodity. They eventually selected a strain of yellowtail which was native to the waters of Baja.

With a 27,000 square foot hatchery south of Ensenada on the Baja peninsula, Ocean Baja Labs (a Baja Seas company) acquired technology from around the world to custom build the only commercial scale Baja yellowtail RAS hatchery in North America. Once in full production, the company expects to have the capacity to produce 2,000,000 Baja yellowtail fingerlings per year.

“The first run of fingerlings was bought from Hubbs-Sea World,” explained Astiazarán. “We did a trial run from larvae and then, when they were the right size, put them into the pens. [Baja Seas] broodstock just spawned in our hatchery in March as well.”

Hubbs-Sea World Research Institute has been doing yellowtail research since 2007 when it conducted pilot offshore pen rearing of the species off the Baja coast, and with other species off the coast of California.

Baja Seas intends to introduce their sustainable product into the U.S. market to provide the fish as a smart alternative to wild-caught.

They aim to do this by growing the fish in pens that have as little impact on the local environment as possible and rearing their broodstock, eggs, larvae and fry in their RAS facility with a low environmental impact.

“The license is for 300 hectares,” said Astiazarán. “The size isn’t so we can grow more fish, but more for the environmental, so we can move pens every two years. We want to move them to be on the safe side.”

“We’re trying to do aquaculture as sustainable as possible because of the criticism out there of offshore farming,” he said.

The marine grow-out site is in Bahia Magdalena, a bay on the coast of the Southern Baja California peninsula. The feeds are comprised of vegetable proteins and omega3 fishmeal derived from sardines.

“We’ll be stocking pens later this year and then triple production for next year. There are a lot of interested buyers in the US,” said Astiazarán. “Some interested parties in the Europe, and the Middle East.”

Expectations for the next five years depend on whether the white-table market responds well to Baja Seas yellowtail.

“But I think the market is ready for an affordable sushi-grade fish,” he explained. “This fish is still a niche market. Hard to say when but at one point it will become a commodity. We are also looking at the non-sushi market as well. The quality of product has a lot of potential. We’d rather be small and guaranty quality than big and lose that.”

Along with the company’s launch in Boston, it also announced a new distribution deal for their farmed yellowtail (also known as Hiramasa), with Catalina Offshore Products, a Southern California seafood distributor. The San Diego-based seafood purveyor has been test marketing the fish and it has already appeared on menus from San Diego to Chicago.

In a recent statement Catalina Offshore Products CEO Dave Rudie emphasized, “The debut of this Baja hiramasa is very exciting for us as it marks a major milestone for Mexico and for the US It is not only a great, local alternative to Japanese or Hawaiian yellowtail, its presence in the domestic market will increase people’s access to a highly valued food source while decreasing pressure on our wild populations.”