New technology and a new species to test Mexican producer 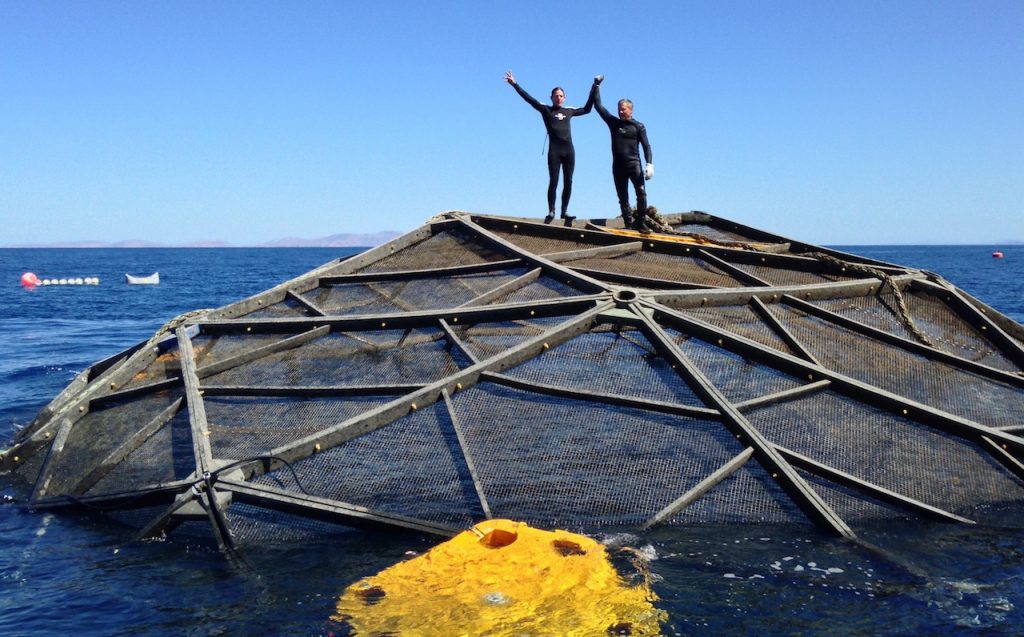 Mexico’s Earth Ocean Farms is using spheroid shape aquapods to rear the endangered Totoaba at a grow-out site in the Sea of Cortez.

“When I signed in to take this new challenge I saw the huge potential in the Sea of Cortez and the Bay of La Paz to develop marine aquaculture,” says Earth Ocean Farms (EOF) company director Pablo Konietzko.

A graduate of the Marine Fisheries and Aquaculture program at Texas A&M University, Konietzko has over 20 years’ experience in aquaculture in Spain, Columbia and the US.  He has worked with trout, tilapia, sea bream and sea bass from hatch to grow-out.

Earth Ocean Farms (EOF) has its headquarters near La Paz Mexico, on the Sea of Cortez.  Konietzko says knowing that the company was going to be using new technology for offshore aquaculture attracted him to the job. “We are using InnovaSea aquapods entirely. We currently have seven aquapods of different sizes within a 10-grid cell,” he says.

The company believes the design of the aquapods presents several benefits over commercial net pens at EOF’s location. “We are in the region of hurricane activity,” Konietzko explains. “Two years ago we experienced one of the biggest hurricanes to hit Baja Sur in years.”  Aquapods’ ability to be fully submersible helps minimize risks. They are anchored on four sides but can move vertically in the water column.  “When we know there is a big storm coming we submerge them 10 meters under the surface to diminish the risk.”

Another benefit is that they are predator-proof. Sharks are not a problem in the immediate area, but there are big sea lion colonies.  “We can sleep tight knowing the sea lions are not going to break into the cages.”

Konietzko admits, however, that they are more costly and more labor-intensive to maintain than regular net pens.  “We are working with InnovaSea to design new systems to decrease the time required for cage maintenance – rotation, sun drying, wind drying and rotating the cage automatically, so we reduce the maintenance costs.”

Water in the Bay of La Paz ranges from 120 to 220 ft in depth at the site, which is enough depth that currents can keep ocean floor build up to a minimum.  The University of Baja California (UBC) Marine Sciences Faculty, which established baseline data of the sea floor before the cages went in, monitors them regularly. “Our plan is to use only up to 25% of the concession zone,” Konietzko says.  “The rest of the area will be a 4-to-1 buffer zone.”

“We have been sourcing Totoaba juveniles for the last three years from UBC’s lab and CREMES (Marine Species Reproduction Center) research facility,” Konietzko adds. Now working in their own pilot scale hatchery in La Paz, the company has brought its first juveniles through to grow-out.

“We are the first company to be raising Totoaba,” explains Konietzko.  There is another company raising Seriola in the Sea of Cortez and a second seeking funding.  “We have permits to raise Seriola if we ever want to get into the grow-out business. I could always buy juveniles and stock cages with it.”

Pacific red snapper is its second target species and hatching systems are currently in the R&D stage.  “We are developing the larvae rearing and culture techniques,” says Konietzko.  A commercial-scale hatchery is being designed to meet production goals of a combined 2,400 tons for the two species over the next five years.

In August 2015, the company received approval to expand its 84-hectare offshore site to 343 hectares (840 acres).  This will provide them space to add an additional 40 new aquapods up to 75 feet in diameter, an ongoing part of the company plan.

Mario Aguilar, National Commissioner of Fisheries and Aquaculture (CONAPESCA), says the approval reflects the government’s support of marine aquaculture. “This reflects our support and commitment to the development of mariculture activity, which has great potential in our country; it already is becoming a reality as well as our dedication to sustainable activities,” he was quoted as saying.

EOA says that they operate within a “smart regulatory regime.”  Collaboration between CONAPESCA and the Ministry of Environment (SEMARNANT) and the “progressive mentality is laudable.”