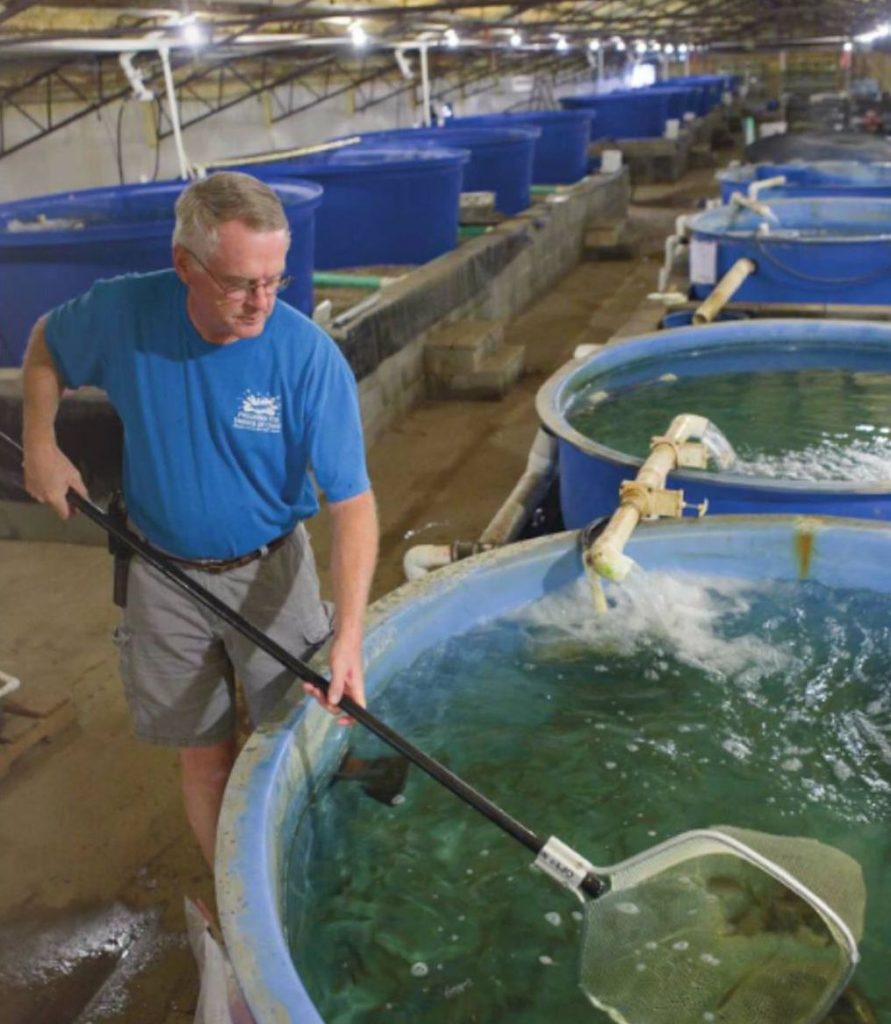 “After grad school (recirculating aquaculture at the University of Wisconsin) I was looking to move back closer to my family and my father found an abandoned chicken farm near our hometown,” explains Dave Smith, from his Freshwater Farms outside of Urbana, Ohio, northwest of the state capital, Columbus.

“We thought this might be a good, cheap way to have some indoor space to try some of the things I wanted to try, with indoor recirculation technology.”

In 1983 they got a 50,000-sq-ft heated barn space and Smith started experimenting from the ground up. “We started using small tanks and then bigger and bigger raceways so we learned a lot hands on,” says Smith.  “This has been my R&D playground for the last 33 years.  My dad and I built it and my son is now my farm manager, so we are well into the third generation of working at the farm.”

“We actually were the first in the world to be a commercial raiser of rainbow trout in indoor recirculating systems.  We did that back in 1986.”

heated barn.  The units were manageable in terms of size, he says, which is important in terms of housing “different sizes of fish but also for isolation if you have any disease problems.” “Thankfully we don’t have much [disease],” says Smith.

They recycle 98% of their water through bio-filtration.  “We run about a quarter to a third of a pound [of fish] per gallon because we are only using aeration.   We do not use pure oxygen.

“We have found that sweet spot that works best for us. But that just comes with trying it.”  The combined indoor and outdoor grow-out system produces about 100,000 lbs of trout annually.

“We had brood stock for a while because of the shortage of trout in our area.  We became a processor and we were HACCP-certified by 1993,” he says.  “From day one we really started raising trout for the fillet market.”

From wholesale to retail

The company originally sold wholesale.  “We are only an hour away from Columbus and Dayton Ohio, whose combined population is 1.5 million people; it was easy to get into the high-end restaurants with a high-quality product.”

“Eventually we opened a retail store here at the farm and within five years we went from all wholesale to virtually all retail.”  Smith says he was happy to do away with the truck routes.   Over time they have developed a lot of value added.

The company now has about 20 different products.  “We started in 1990 making trout patties and we have been doing smoked trout since 1992 with our walk-in smoke house,” Smith says.    “A lot of our trout is going into smoked products, spreads, chowders.  Eventually we hope to open up to other markets as well.”

“When we first started I bought fingerlings from a place in Michigan,” recalls Smith.  “I killed my first batch because there was too much iron in the water. So I had to design a filter to take care of that problem. We eventually drilled another well.”

Water is abundant in Urbana, Ohio, says Smith.  The many gravel pits access a huge aquifer and he is combining both, to extend his grow-out capabilities.   “A number of years ago we did a three-year project with 16 cages and a floating island with aeration. We have just leased a second gravel pit.”

The quarry lakes are only 20- to 30-ft deep, making them ideal for winter growout.  “We had a local environmental agency do a tally and they found 250 gravel quarries within 20 miles or so.   Even with low density cages we could be raising 5 million lbs of trout a year.”