Send in the drones 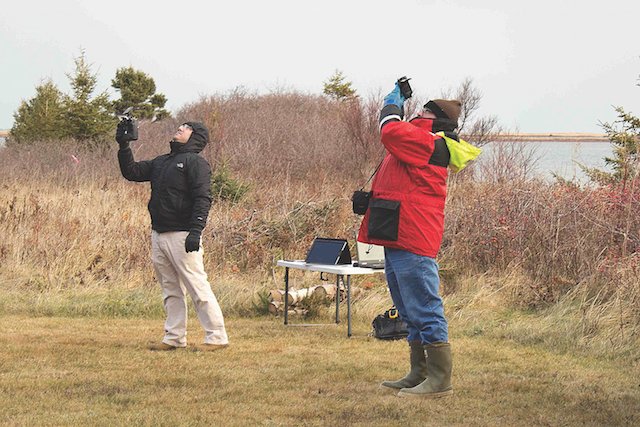 Using drones to keeping sea ducks away from mussel farms could be an effective strategy.

Sea ducks have been a longstanding challenge for mussel farmers around the world. To a hungry bird, a mussel farm may as well be a buffet table, resulting in lost product and lost revenue. Members of the Prince Edward Island Aquaculture Alliance (PEIAA), in cooperation with PEI Atlantic Shrimp Corp and the PEI Department of Agriculture and Fisheries, have been experimenting with the use of drones to protect mussels from avian avarice.

PEIAA executive director Matt Sullivan says, “We tried different bird scare systems: noise cannons; sonic deterrents like those used at airports; ones with underwater speakers. Some growers tried chasing them away with boats. Lasers were also used. Even falconry was used a couple of years ago. In all these methods, our goal is never to harm the sea ducks, it’s just to shoo them away so they don’t eat all the product.”

Some of those techniques are still used regularly, but there remains a need for tools to manage the problem. When a drone company approached PEIAA research and development coordinator Peter Warris to see if he was interested in using drones for monitoring purposes, Warris thought: why not use drones to ward off sea ducks?

“We did trials in November, in Rustico, St Peters and St Mary’s Bay,” says Sullivan. “It seemed to work. You fly it around a few times and the birds start to leave the area. It seems to stress them out enough that they don’t want to stick around.”

While the drone idea shows potential, Sullivan says more trials are necessary because there were unusually few ducks during the November trials. The drones need to be tested when there are more ducks.

Sullivan. “We’re working on that now but it will take some time.”

Sullivan says that once there are enough proven and effective techniques for dealing with the sea ducks, mussel farmers who share a bay will have to work together to protect the entire area because scaring ducks from one farm will likely only drive them towards another farm.

“We need to have a plan so that it’s above water and underwater,” says Sullivan. “It’s going to be a combination of different solutions. The drone will be one thing in the tool kit but there’ll have to be something else as well because the sea ducks are smart and they’re going to eat. But maybe we can help them do it in the least destructive way possible.”