Mike Meeker has been farming rainbow trout off of Manitoulin Island in Canada's Lake Huron since 1984. A self-described "pioneer" in the business, his first net pen was hammered together with logs he cut in the bush and floated on oil drums. He's come a long way since then. As the managing director and part owner of Blue Goose Foods, he oversees two pen sites that each produce a million pounds of trout a year. 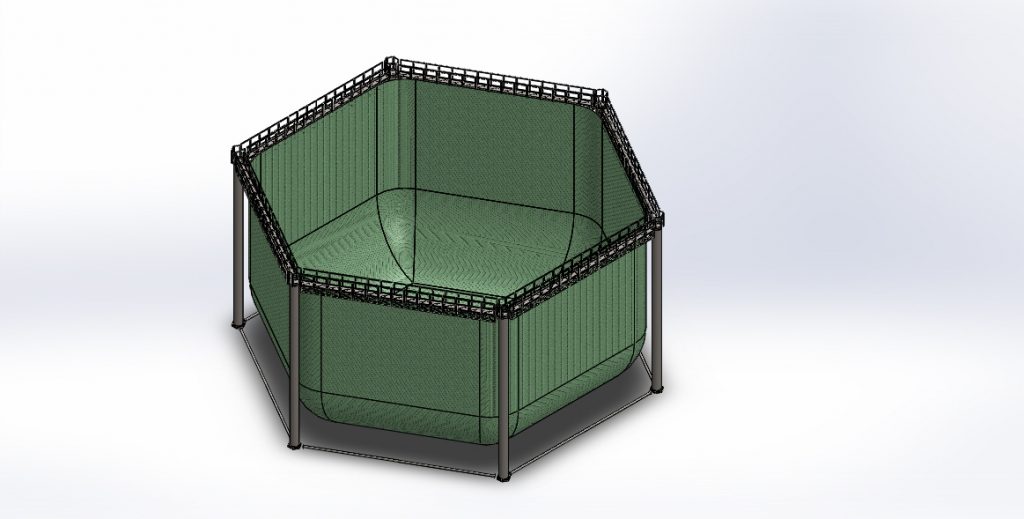 Along the way, Meeker has been building pens to accommodate his evolving aquaculture business. He describes his latest design, the StormSafe Submersible pen as a “game changer.”

The Great Lakes receive some of the strongest winter storms on the planet. One-hundred-km winds combined with freezing temperatures batter the pens constantly.

“High energy, short frequency waves we see here are much more punishing than the long frequency ocean waves,” explains Meeker. “You know the surface cages are not going to last.”

But the worst problem can be ice in the spring. “We can get up to 40 inches of ice and the flows can be as much as a mile wide. I’ve lost two pens completely torn up by ice.”

“As the manager I was always the one called out in the middle of the night to rescue the pen and I don’t want to do that any more,” says Meeker. “I’ve done some crazy things. It makes for good stories but it doesn’t make for good business.”

His solution is to go underwater.

Many Ontario growers use a submersible cage for their shore-based systems, that’s an earlier design of Meekers’. The cages can be winched below the surface.

“It works well when the only time we need to submerge is in the spring to avoid the ice,” says Meeker. But as pen installations begin to move offshore in both lake and marine environments, he needed something different.

“The actual idea evolved from oil rig technology,” says Meeker. “When I was working with the National Research Council to develop the original submersible cage, I came up with the vertical spar concept at the same time and discussed the concept with the NRC engineer.”

The design uses six vertical floating spars to support the corners of a hexagonal shaped pen. That’s an advantage because there is very little horizontal surface area for wind or waves to act against. In a typical surface cage, the various structures are constantly twisting and buckling in different directions, which puts enormous stress on the system.

In the StormSafe, the vertical spars bob up and down with the waves. Three separate air-filled buoyancy chambers hold them upright. The bottom chamber is usually filled with water, making it stable when operating on the surface (like the keel on a ship).

The pen can also be quickly submerged. “It only takes two minutes to get the pen below the waves,” says Meeker.

“I’ve been watching the weather for more than 30 years, I have an app on my phone, and I still get caught,” he says. “Again I am the one who has always gone out and made things secure.” The technology to release the air from the buoyancy chambers and lower the StormSafe remotely by computer or by phone is being integrated into the plans.

StormSafe is over built, adds Meeker. The only moving parts are the hinges that link the corners, which he says are made of the same vulcanized rubber as aircraft tires. “When I modeled it with the engineers and they told me this is the size of hinge you need but I said build it 10 times bigger and 10 times stronger.”

A net cover keeps bird predators out of the fish supply and keeps the fish in, when it is submerged.

When it comes time to raise the pen one only needs a small boat and a 10-horsepower air compressor. The forced air dispels the water and the spars float the pen up to the surface.

“We can also raise it up six or seven meters above water level to be able to clean the that critical top area of the pen,” says Meeker

“We started with galvanized steel and that works fine in freshwater,” Meeker says. “But now we are coating everything with Amer coat 238, the same epoxy found on the nose of Canadian ice breakers.”

Meeker says he is working closely with customers to build the system to their specifications. “If they need shark proof netting, we can install that.”

The net pen can be ordered in bigger sizes. For a 30-percent increase in cost, an 8-side pen can be constructed, doubling the fish rearing space. Kroph Industrial, a local company that Meeker has worked with for 30 years, does the construction.

“I’ve designed it so that I can all be shipped out in three containers. I’m looking at sending one to Denmark for around $12,000.”

He says he has “serious” interest from the east coast of the US, Finland, South Africa, Israel and India.