US will miss ‘aquaculture revolution’ without skilled manpower, say experts

The US aquaculture industry faces numerous hurdles: a negative image, a difficult regulatory environment and, crucially, a shortage of educated, skilled workers. 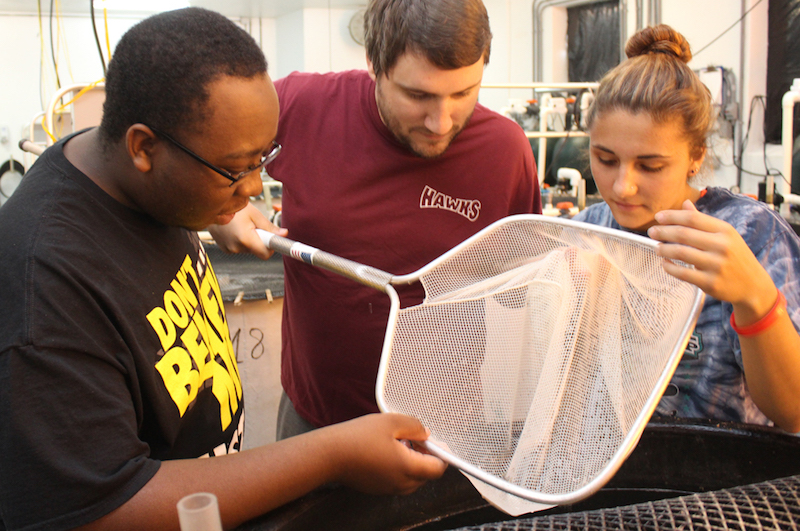 That lack of professionals, in turn, threatens to hold back the industry even as demand for farmed seafood and fish is rising and Americans grow increasingly aware of the origin of the food on their plates.

Well-trained workers with the necessary skills are hard to come by, Michael Schwarz, a past president of both the World and United States Aquaculture Societies, told Aquaculture North America (ANA). In the 25 years he’s been in the industry, Schwarz has seen only attrition.

“As soon as you start looking for experience in fish culture and fish hatcheries, biosecurity, we’re not getting the next generation jumping in,” said Schwarz, who is also the director of Virginia Tech’s Virginia Seafood and Agricultural Research and Extension Center.

Even though investors are beginning to funnel money into domestic aquaculture projects and customers are demanding more fish and seafood, qualified employees aren’t there to fill skilled jobs.

The problem stems, in part, from a general apathy among young people about the sources of their food, Schwarz said. An indoors culture and urban-centric society disconnects young people from the food they eat.

“We’re going through a generation where they don’t think much about food, where it comes from, how we get it, how we grow it,” Schwarz said.

And that affects the types of jobs they’re pursuing.

“With the current folks that are in college or going into college, they’re looking at IT jobs, they’re looking at computer skills. There’s not many going into agriculture, and aquaculture is a sector of agriculture,” Schwarz said. “We have less farms, we have fewer children of farmers willing to work the farms. They’re going to the cities. They’re getting computer jobs, office and business jobs.”

Many millennials are growing more interested in ensuring their food is sustainably harvested and grown, and Schwarz sees some hope in the younger generation, especially kids in grade school now. These young people seem to be more interested in where their food comes from and where it’s grown. A slightly older generation accustomed to popping open soda cans and scarfing down potato chips is giving way to a generation concerned more about nutrition and the origin of the food on the table.

“We’re getting more young students that are coming back to: where does food come from? Why do we grow it? Why is it important?” Schwarz said.

But even as interest in aquaculture grows, educational institutions haven’t caught up. Programs to train potential workers are still declining.

Educational institutions will have to change course to make aquaculture programs strong again, Schwarz said. That will require increasing grant funding or attracting new students – the two sources of stability and growth at educational institutions. But with grant funding for aquaculture limited, colleges and training programs will have to make more efforts to attract more students, Schwarz said.

Already, foreign students are filling that gap – coming to the US for high-tech aquaculture education and training at US institutions.

Three quarters of the interns Schwarz helps place in jobs in the US come from abroad with rapidly growing aquaculture sectors, such as the Middle East, India, Africa, Southeast Asia and South America. These students then return to their home countries to help expand those aquaculture industries.

“We need this same interest from US students to help drive expansion of our domestic industry,” Schwarz said.

People are needed to fill technical jobs as extension specialists, government regulators and experts, scientists and business owners, according to a 2015 study outlining the status of aquaculture education in the US.

Compared to terrestrial agriculture and capture fisheries, aquaculture as an industry is a newer field of science, blending several scientific fields with technical skills.

Before the 1970s, few colleges or universities offered aquaculture training. Since then, many universities, vocational schools and community colleges have developed programs.

The need for aquaculture jobs rose from the 1970s to 1990s, with most early programs focused on freshwater systems, while marine systems came later. Today, emerging science fields have superseded some historically strong aquaculture programs, the study said.

A 2003 United States Department of Agriculture and National Sea Grant study found the average aquaculture extension educators were in their 50s. Now, the current coterie is in their 60s and is aging out.

“New generations of aquaculture professionals are needed to replace retiring ‘boomers’ and fill professional positions,” the study authors wrote in their paper, titled “National Assessment of Aquaculture Education at Postsecondary Institutions in the United States.”

Professors that started aquaculture programs in the 1970s and 1980s are retiring, and the faculty that are replacing them are professors that do other types of science, said Jesse Trushenski, the president-elect of the American Fisheries Society.

“Public fish hatcheries and private fish farms have an increasingly tough time finding and hiring people with appropriate education and, especially, hands-on experience in raising fish and other aquatic species,” said Trushenski, who is also the supervisor of the Eagle Fish Health Laboratory in Idaho. “Sourcing talent is an ongoing challenge.”

The existing cohort of aquaculture professionals in both the public and private sectors is approaching retirement. “We are all wondering about workforce readiness and whether the next generations of aquaculturists will be adequately prepared to assume the positions vacated by the ‘old guard,’” Trushenski said.

The United States has been a leader in aquaculture research and development, if not industry growth. “Because growth of the aquaculture industry has been relatively slow in the US compared to other parts of the world, we tend to be a net exporter of aquaculture advances and talent,” Trushenski said.

To raise interest in aquaculture careers, the industry must first improve its image by educating people on ability to meet food security needs and aid in the conservation of wild aquatic species.

The demand is there. Increasingly, restaurants are advertising farm-raised fish and customers are asking for it. Seafood prices are rising, and high-intensity cultivation systems should be able to aid the industry, as well as large, turn-key systems that can produce significant volumes of seafood, Schwarz said.

“We are in an aquaculture revolution. It’s just this country is missing it,” Schwarz said.