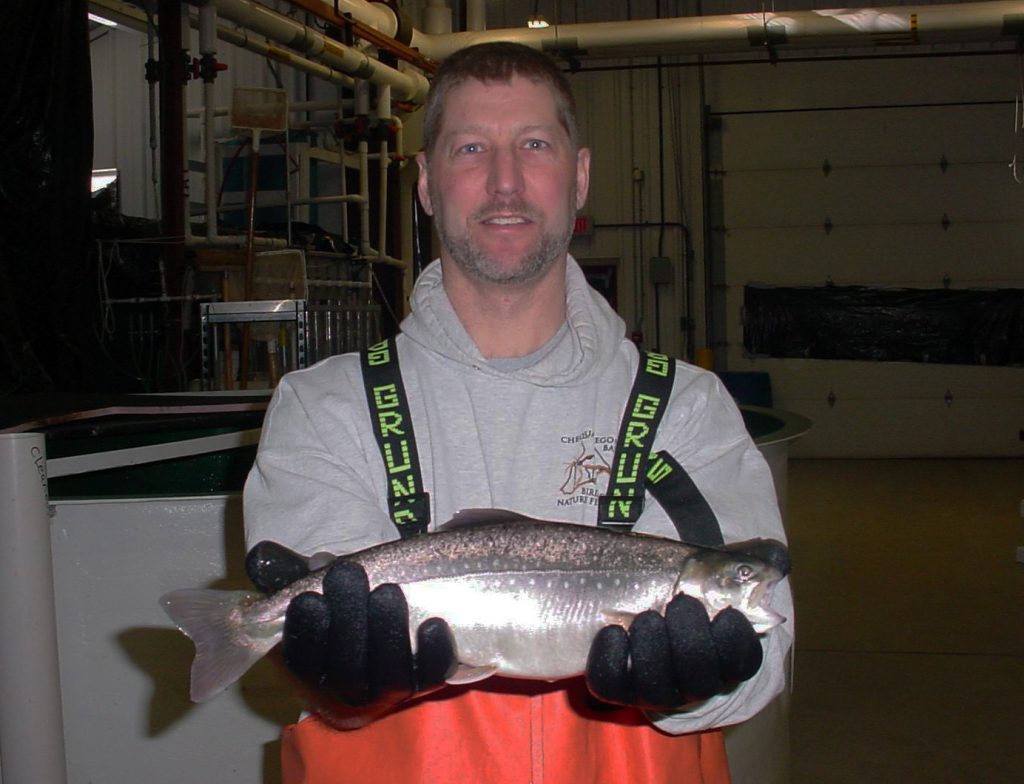 “Arctic char may be the ideal aquaculture species”

That statement by Greg Fischer, Facility Manager at the University of Wisconsin-Stevens Point Northern Aquaculture Demonstration Facility (UWSP-NADF), shows his enthusiasm for Arctic char culture.  He adds “It is easy to grow, ready for harvest in 17 months, and has a high fillet yield.”

Fischer and his team at the Bayfield, Wisconsin facility have been raising Nauyuk strain Arctic char (Salvelinus alpinus) from Trout Lodge for several years and conducting research to provide the fledgling industry in Wisconsin with the most efficient production conditions.

The UWSP-NADF facility, funded by the Wisconsin aquaculture industry, has been in operation since 2006 and was designed to conduct applied research as well as providing education and outreach services.  Projects taken on are collaborations with industry, universities, and governments throughout the US and Canada.

“This facility is unique,” says Fischer. “We have outdoor static ponds and flow through raceways and three large indoor recirculating systems (RAS). We can rear with cool water up to 80oF appropriate for walleye, yellow perch and other fish and cold water 10-13’C for char and rainbow trout and more recently Atlantic salmon.”  The different systems allow them to grow over 20 fish species from egg to maturation.

Fischer, who helped design the facility and has been the manager since it opened says the work conducted over the past five years using the UWSP-NADF systems has made him excited about char as a candidate for aquaculture even though it is a relatively new species to culture in the state.

At UWSP-NADF, char eggs hatch in about 30 days and are raised in a standard rearing system for several months followed by a 12-13’C RAS rearing period of up to 10 months where growth is exponential.  In about 17 months market size fish of 2.2lbs are harvested.

“Char can be grown at higher densities than other cold water fish, 100-170kg/m2 compared to the normal 60-80kg/m2 for rainbow trout” Fischer says “and 60% of the body weight at harvest of 2.2lbs is fillet leaving only 40% waste which is favourable compared to other fish such as tilapia which have up to 70% waste”.

For these reasons and the higher niche value for char in the market, it was selected for further research into key production requirements and two projects were recently completed.

Recirculation systems were used for the research because they provide control over environmental conditions and are felt to be the best option for the industry to maximize growth while minimizing water use, concentrate effluent into small volumes for disposal, and improve biosecurity and fish health.

UWSP-NADF projects have researched a number of key culture questions including photoperiod effect on production, early life stage rearing temperatures and rearing densities. This research is in cooperation with a private Wisconsin company, Aquaterra, who sponsored the studies and Troutlodge Inc. from Washington State who donated the eyed Nauyak strain Arctic Char eggs.

In many fish, photoperiod and temperature greatly influence fish performance including sexual maturation, spawning, fillet yield, and growth rates. Although there have been studies on photoperiod effects, an optimum photoperiod for commercial production for char had yet to be determined.  Of the photoperiod regimes researched, results for the UWSP-NADF system show the ideal is 24 hour light which provided maximum growth and minimum maturation.

In addition to conducting applied research, the UWSP-NADF supports the industry by providing trained technicians. The facility takes students on through internships and they leave with the technical expertise needed to culture many species and support the development a new industry such as char culture.

Utilizing RAS to rear Arctic char has shown to producers that they can provide a high quality product that demands a premium price in the market.  “With RAS we can operate with significantly less water than a traditional flow-through facility. Through our demonstration projects we have shown how RAS technology is more environmentally responsible and sustainable for aquaculture” says Fischer.

But RAS are complicated systems and Fischer and his team have an ongoing role in providing support and advice. Facilities from all over the country call them for technical assistance and help with problems in RAS systems. “Moving aquaculture forward requires good technical knowledge, engineering and production, all working together all relying on each other.”

When asked about the growing char in Wisconsin, he stated “To be successful, we need to look at things differently, need to find the best fish that can be raised easily and identify new species that we haven’t grown before.”

More information on the UWSP-NADF, char research, and other projects can be found at aquaculture.uwsp.edu or by request from Emma Wiermaa, Outreach Specialist, ewiermaa@uwsp.edu.