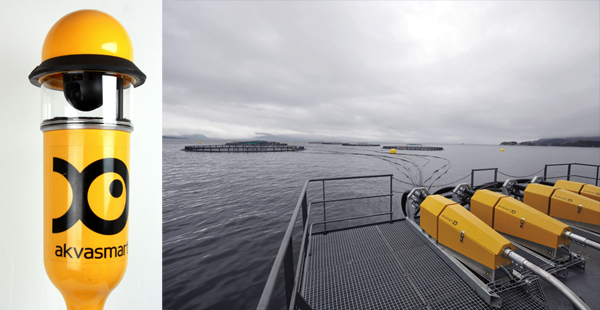 Akva Group, an international technology and service provider, has developed the wireless Akvasmart Digital CAP (Cage Access Point) which connects camera and environmental sensors to the feed barge. “The previous analogue CAP has proven to be a robust housing for electronics installed onto cages. Consequently, we have used the same concept for this new digital version” says Mr. Jan Inge Tjølsen, Product Manager at AKVA group in Norway in a press release.

feed barge network. Bandwidth for transmitting video and control commands is dimensioned for multiple parallel video signals. According to the company, the Ethernet technology improves video image quality compared to analogue signals and the surface video camera has also been upgraded to a powerful pan/tilt/zoom camera that is controlled from the feed barge control room allowing for video surveillance of the cages, nets, moorings, workers and other tasks on the cages. A very practical feature that also increases worker’s safety.

More information can be found at http://www.akvagroup.com