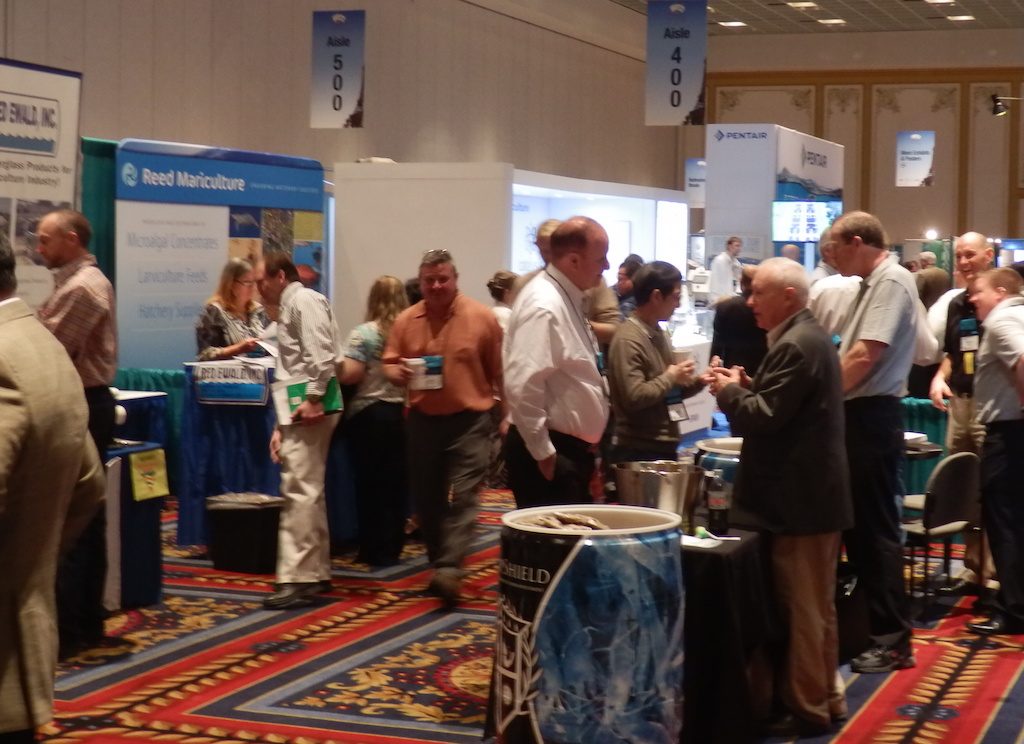 I believe strongly in professional and technological conferences, such as Aquaculture 2016, which was held in February in Las Vegas.  Sharing information — information based on scientifically valid evidence; and viewing in person new equipment, recent developments in feeds and feeding, and seeing the latest developments for maintaining the health of aquatic animals are vital to economic and ecological progress in aquaculture.  The methods, equipment, and feeds of the past simply don’t “cut it” in the 21st century.  The fact that humans are “social animals” also enhances the value of face-to-face meetings with colleagues.  Webinars are nice; even valuable, but they cannot replace well-organized conferences held in locations that are conducive to information exchanges, including personal conversations.  Aquaculture 2016 offered many benefits to attendees, but, sad to say, the conference also had some serious flaws.

The venue, the Paris Casino Hotel and Conference Center, was a distraction.  Approximately 3,000 people attended Aquaculture 2016.  As many as 14 concurrent technical sessions, plus the Trade Show, were active at any given time during the day; therefore, it would be reasonable to expect 100 to 200 individuals attending each technical session. Wrong. Most sessions had fewer than 30 attendees and only the Plenary Session had more than 200 attendees.  Many explanations can be offered, but the distractions of Las Vegas certainly contribute to low attendance in technical sessions.  Perhaps the fact that many of the presentations were progress reports, or even discussions of concepts yet to be studied, made skipping out to see the “sights of Vegas” even more attractive.

An objective observer might ask, “Why are there so many sessions, and why are many presentations of incomplete research, or long-term experience/observation reports?”  I suggest a simple answer: “Individuals who present papers are almost certain to be approved for financial support to attend the conference and to actually attend the conference.”  The end result is that acceptance of all proposed contributions is a simple way to increase total attendance at conferences.  A related “problem” is the schedule of 15-minute presentations, rather than 20-minute presentations.  Shorter presentations add up to more than 400 additional program slots for speakers, but, with very few exceptions, the quality of the presentations suffer from the tight time constraints.  Increasingly, the organizations sponsoring conferences rely on proceeds from them to support their other activities.  The negative effects on program quality are considered to be “collateral damage” — something that must be accepted to accomplish financial goals.

The Trade Show for Aquaculture 2016 was a strong point for the conference, but it, too, had a

couple of problems.  I am still trying to figure out what facials, facial products, and massage therapy have to do with aquaculture.  Do attendees look so worried and worn that we needed to be “accosted” by young female entrepreneurs, seated at their booths, and offered three-year supplies of facial products for the “conference bargain price” of only $600? On the positive side several exhibits demonstrated new approaches to water-quality management, especially recirculation systems in which individual tanks included their own bio-filters.  Advances in nutritional supplements and fish health management also piqued my interest, and the interest of other attendees.  A “humane harvest” system developed by Dr. Robin McKimm and his associates with Smith-Root promises to improve product quality, while also alleviating the concerns of animal welfare activists who object to traditional methods of euthanasia — methods that appear as violent killing to these concerned individuals.  All-in-all, I thought the Trade Show promoted a positive image and bright future for aquaculture.

Technical sessions that explored questions related to the social acceptance of aquaculture were a positive addition to traditional sessions; although individual presentations, such as Dr. Ron Hardy’s review of physiology-nutrition advances clearly demonstrated the value of a longer presentation delivered by a senior scientist.  Sessions on health management, genetics, factors promoting efficient growth, and water-quality management also provided valuable nuggets of information for attendees willing to resist the allure of the casinos.  However, the sessions focused on the social acceptance of aquaculture revealed one of the harsh realities facing aquaculturists: the fact that some well-financed activist groups, and individuals who believe the propaganda produced by the activists, consider aquaculture to be “the problem, not the solution.”

Two sessions explored anti-aquaculture activity and the belief-driven perceptions that drive opponents of aquaculture.  Rather surprisingly, some anti-aquaculture activists actually registered for the conference and attended these sessions.  Based on the discussion I had with one of these individuals after my presentation, we did little or nothing to change the beliefs of such activists.  Their beliefs can explain everything, and justify anything whether or not they have any connection to reality.  We can only hope that aquaculturists learned some strategies for presenting real, evidence-based science that supports realistic understanding of aquaculture.  The old, established method of inviting critics and potential opponents to visit facilities, and the new method of virtual reality facility tours from a fish’s point-of-view, can be effective game changers.  Or, an extended conversation about genetically engineered salmon with Dr. Ron Stotish, the CEO of Aqua Bounty can do wonders for one’s confidence in modern science and the U.S. Food and Drug Administration that approved these salmon for human consumption.

I‘m saddened to conclude on a negative note, but the Federal Town Hall, organized by the National Aquaculture Association, did little to convince me that the U.S. Federal agencies understand the needs and the problems of American aquaculture.  I suspect that Dr. Michael Rubino, NOAA Fisheries, may have been the only member of the panel with a real understanding of what it takes to rear aquatic animals in captivity.  Barbara Dwyer, USDA Food Safety Inspection Service, also seemed to understand the role of her agency in supporting American aquaculture.  There may have been positive remarks from others, but I became so terribly disillusioned by endless excuses about budgets and agency mandates that I could easily have missed them.