Building a ‘new’ industry, one module at a time 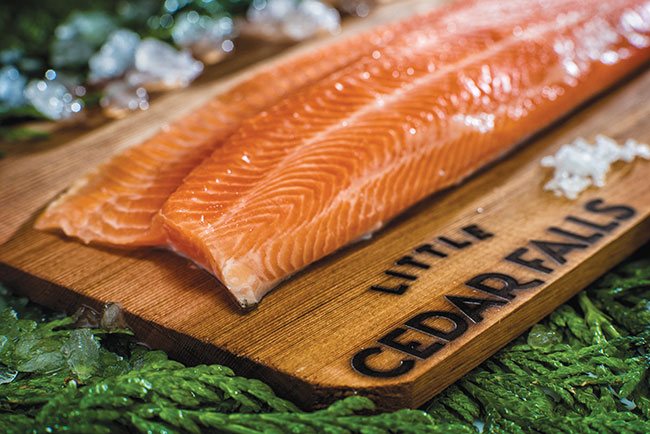 The farm’s steelhead salmon is sold under the brand name Little Cedar Falls. All Photos: Taste of BC Aquafarms

Steve Atkinson is a skeptic of mega RAS farms. He believes the future of salmon farming using recirculating aquaculture technology (RAS) lies in building 100- to 400-tonne farms instead of the 10,000- to 90,000-tonne facilities being built around the world.

That’s what guided Atkinson when he set out to build Taste of BC Aquafarms in Nanaimo, British Columbia in 2012. The land-based steelhead farm has a hundred-tonne annual capacity. It was one of the very first closed containment salmon farms in production in North America.

“Right from the beginning, our goal was to develop, demonstrate and test the viability of land-based salmon aquaculture at a small to medium scale,” says Atkinson. “We wanted to come up with a module with known outcomes that could be replicated in other locations.”

Atkinson wasn’t the only one testing RAS technology to raise salmonid to market size at that time. But Taste of BC Aquafarms is the only one that has been in operation continuously to this day. And that says a lot.

“Most of the other attempts had one goal: to displace net cage salmon aquaculture. They were largely driven and financed by NGOs. I want to build a new industry, not displace an old one,” he says. 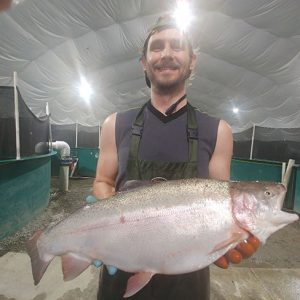 Staff Ben Oldham holds an unusually large 4.8-kg steelhead from Taste of BC Aquafarms. ‘Every once in a while we get one that grows way above the curve,’ says company president Steve Atkinson 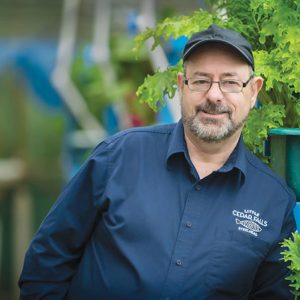 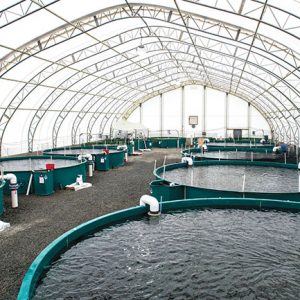 Since July, the land-based steelhead farm in Nanaimo, BC has been seeing consistent weekly harvests of 2 tonnes of steelhead weighing upwards of 2kg each

Prudence pays
Some things stand out when looking back at the journey of Taste of BC Aquafarms. For one thing, Atkinson has always been very conservative in spending. This set Atkinson apart from his contemporaries. He says they outspent him 10 to one but never produced any fish. If Taste of BC had spent $30 million during the early years, he says the company would likely have drowned in debt.

Moreover, the farm has no “crazy overheads.” This helped the company recover from a bacterial gill breakout that killed a massive number of fish a year ago.

But there was no shortage of challenges. In land-based RAS, the application of crucial elements such as oxygen and light levels or feeding regimes have to be tweaked over time until one reaches optimal output. “One issue would come up, we’d solve it and then three more arrived,” says Atkinson.

After years of learning, Taste of BC has reached a pivotal moment. Since July 2020, the farm has been seeing consistent weekly harvests of 2 tonnes of steelhead weighing upwards of 2kg each.

“For the first time, our farm is full with over 30 tonnes of biomass. Each tank is staged the way it’s supposed to be with fish at the right size. We’re harvesting our target – two tons a week and we’re selling that every week.” The company sells its fish under the brand Little Cedar Falls.

He admits the farm is not profitable yet, but it is on its way. The constancy of harvests “will put us in a profitable position,” says Atkinson.

“We have now a full farm, with all fish performing above our target growth projections on a constant basis. All of our production is top quality with no downgrades. They meet market standards as to size, colour, taste etc.”

The volume of the weekly harvest “is a size you can handle,” he adds. “A local market almost anywhere could probably handle that volume. You can service a province or a major city.”

While working towards profitability, Atkinson keeps an eye on the environment. The farm is working on refining a liquid fertilizer derived from fish manure, a product it developed with two students from the Vancouver Island University. The hope is for the product to help generate revenue as well as recycle the fish waste.

“The bottom line is we are running a good business. One that brings in profit, treats the environment with respect, and produces high quality seafood for all to enjoy,” the company writes in its website.

Search on for right partner
The next step will be to find the right financing partner to truly bring Atkinson’s vision of a modular, replicable farm to fruition. With the company’s model and their story, he feels it should be a fairly easy sell.