As the need for aquaculture to produce more fish is increasing, the availability of suitable sites off Norway’s coast is decreasing, according to Ola Helge Hjetland, group communications director of Mowi.  But if companies can engineer cages that can withstand the beatings of the open ocean, they will open up vast new areas for farming. 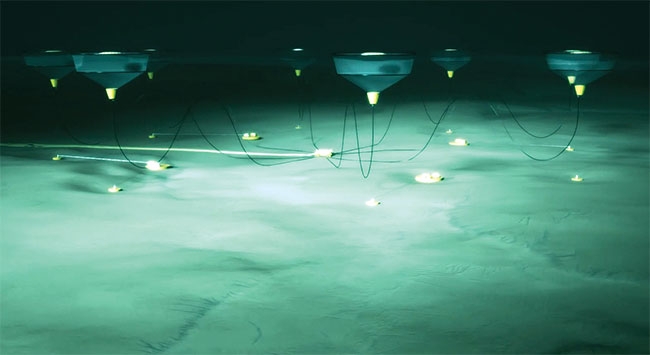 And, in the process of rethinking cage design and moving towards closed containment systems in the ocean, innovators may also solve some of the problems of sea lice and fish escapes.

Locating aquaculture facilities farther out to sea also has less immediate environmental impact on coastal ecosystems with a much cleaner and temperature-stable environment for the fish, says Chris Sworder, an industry analyst at the Cleantech Group.

Before solving the engineering challenges, however, the first hurdle leading Norwegian salmon producers face is obtaining a development license from the Norwegian Directorate of Fisheries.  A program launched in November 2015 manages these licenses to promote “technology that can solve the environmental and acreage problems facing the aquaculture sector,” according to Norway Exports.

Some recent advances and setbacks
In 2018, Norway’s SalMar completed its first 15-month production cycle at Ocean Farm 1, the world’s first deep-sea aquaculture farm, and announced not a single delousing treatment was required.  Despite a structural tilt resulting in fish escapes, the company concluded overall, “Such promising results boost our confidence as we embark on the next phase of our strategy of farming fish in locations farther out in the ocean.”

That advance will continue with MariCulture, which began operating as a SalMar subsidiary last year.  In February, it received eight licenses, out of 16 for which it applied, to develop the “Smart Fish Farm” concept.  The semi-submersible steel structure of a spoke-and-wheel design will be engineered to endure the “harsh environments” of the open ocean, the company said.

Last year, a Norwegian venture between Midt-Norsk Havruk and Seafarming Systems (now re-branded “Aquatraz” after the high-security prison) brought forth another new design: a semi-closed cage with solid walls in the top eight meters to protect salmon from sea lice (which live closer to the water’s surface).  Operators lift up the net pens inside the steel wall for maintenance and harvesting, reducing the risk of fish escapes.

Just in April of this year, Mowi announced a new cage concept called AquaStorm that features a submerged, offshore farm controlled through an onshore control center. The fish pens would be positioned 15m below the surface of the sea, where the fish are protected from sea lice and disease, but they could be sunk to a depth of 50m if weather conditions require. But the Norwegian Directorate of Fisheries, which must approve technology before a company proceeds with development, rejected the proposal in May because “it lacked details supporting the technologically demanding concept.”  Mowi will appeal the decision, according to a spokesperson.