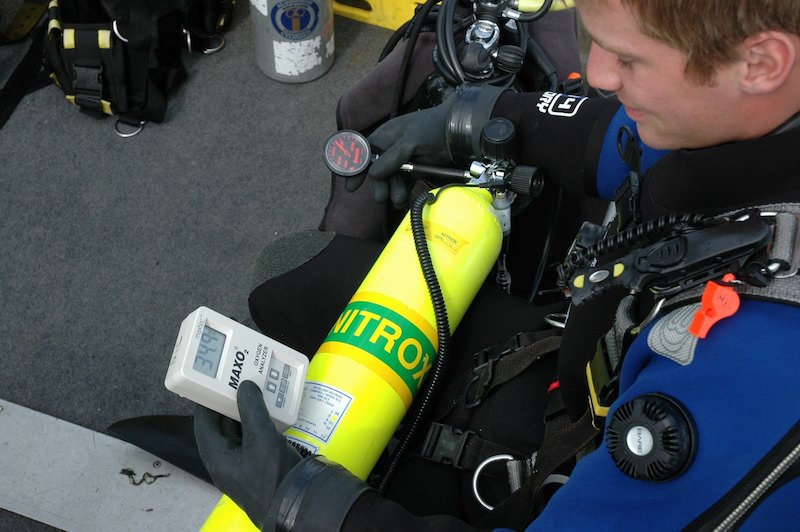 Ever wonder how you can increase the productivity of the dive team in one easy step? How you can get longer dives times, shorter surface intervals, and maybe even get an extra dive in near the end of the day? And without it costing a small fortune? The answer is to switch from breathing air to nitrox.

Divers breathe pure clean compressed air when underwater. Nitrox is similar to air in that it is a mixture of nitrogen and oxygen, but nitrox is air with a little extra oxygen. Normally, air is about 79% nitrogen and 21% oxygen (with some minor trace gases). With nitrox, the oxygen levels are increased to about 30 to 40 percent. It’s not the higher level of oxygen that makes divers are more productive, instead, by raising the oxygen, we lower the percentage of nitrogen.  Nitrogen reduces bottom time.

Nitrogen in our breathing air causes problems.  Nitrogen is an inert gas not needed by the body but with the pressure of diving our tissues absorb it like a sponge. Problems occur with the ascent to the surface when the extra nitrogen accumulated on the dive needs to escape our bodies. It does this by forming bubbles in our tissues resulting in decompression sickness or as commonly known “the bends”.

There are dive tables and computers that have established limits for how much nitrogen we can safely absorb, however if nitrogen is at a lower level initially les will be absorbed and the dive time can be extended with more work accomplished.  This is the primary benefit of nitrox as a breathing gas: less nitrogen.

However nitrox has a dark side – elevated oxygen levels. Our bodies need and use oxygen but too much of it under pressure can cause convulsions. Convulsions underwater usually result in drowning.

But is it relatively easy to manage oxygen by calculating a maximum operating depth (MOD) for the nitrox mix being used and never go deeper.

The best nitrox mix for the depth can also be calculated in order to get the most bottom time and prevent oxygen toxicity. Nitrox is most efficient in a depth range between 40 and 130 feet of seawater.  Elevated oxygen levels result at depths greater than 130 feet.

Having your dive crew blend their breathing gases may sound a bit scary, but there are reliable and affordable blending systems commercially available that work well. Commercial divers have been blending and using nitrox for over 100 years and the latest technology even has smart phone apps for the blending formulas.

The blending technology is are slight expensive than for regular breathing air compressors and in some cases existing equipment can be modified to blend nitrox.

Minimal training is required to get divers and supervisors up to speed in blending and using nitrox, but the gain in production pays off.

We say that divers have a toolbox and good divers pick the right tool for the job. For aquaculture diving the right tool for the job is nitrox.  Switching from air to nitrox will give your dive team longer no-decompression limits, shorter surface intervals, and less nitrogen loading.  Best of all, it is simple and easy, but of course proper training and development of operating procedures are required.

Divers are just like your car, if you want to see performance increase switch them over to premium fuel.

Kelly Korol is the President of Divesafe International and can be reached at Kelly@divesafe.com.