Protecting cage and pen fisheries from invasive species is a big challenge. 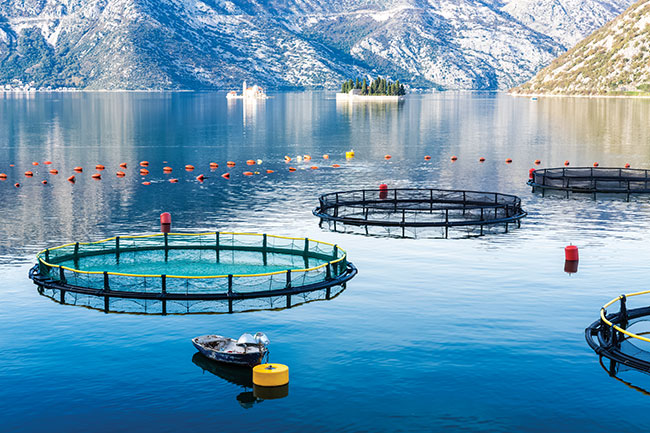 According to the National Ocean and Atmospheric Administration (NOAA), invasive species are considered to be one of the greatest threats to marine and coastal biodiversity worldwide, second only to habitat loss. NOAA Fisheries recognizes that invasive species have a profound effect on aquatic ecosystems and is working to protect our coasts from these invaders.

In addition to “invaders,” farmers have to deal with adverse, inaccurate publicity like:

When in truth, invasive species can lead to the extinction of native plants and animals, destroy biodiversity, and permanently alter habitats through both direct and indirect effects.

There is a big difference between exotic and invasive species. Exotic species are animal or plant species moved from their original range (location) to a new one, but are not yet reproducing in that new range.

It is considered an invasive species when exotic species establish and begin to reproduce in the new range.

“I have not heard operators speak to nonnative species to the United States or native species moved outside their native range causing damage to physical structure or fish in grow-out. Terminology is a challenge when talking about invasive species,” he said.

Shellfish farmers in U.S. coastal waters, in certain regions, have experienced predation and fouling. Predation by the nonnative European green crab has occurred in Washington, Oregon and northeastern states and nonnative species can contribute to biofouling of production gear or damage to growing shellfish.

Biofouling of shellfish production gear is a significant challenge caused by mostly native and a few non-native species.

The NOAA reports aquatic invasive species are found throughout the world with very few exceptions. They are in wetlands, streams, rivers, bays, and along the coasts, and can be found up to thousands of feet in depth.

Invasive species can be found from Alaska to Louisiana, and from Maine to Texas. In some regions of the United States, the problem is more severe than others. Florida, the Great Lakes, and the southern West Coast are among the most heavily infested regions because of moderate climates and transportation hubs such as ports that allow invasive species to thrive.

In recent years, Indo-Pacific lionfish have been found in coral reefs throughout the southeast Atlantic, Gulf of Mexico, and Caribbean. While scientists are unsure exactly how they got there, they believe that people have been dumping unwanted lionfish from home aquariums into the Atlantic Ocean for more than two decades.

Invasive species may not have natural predators in their new environment, and/or can outcompete native species for resources such as food, light, prey and habitat. 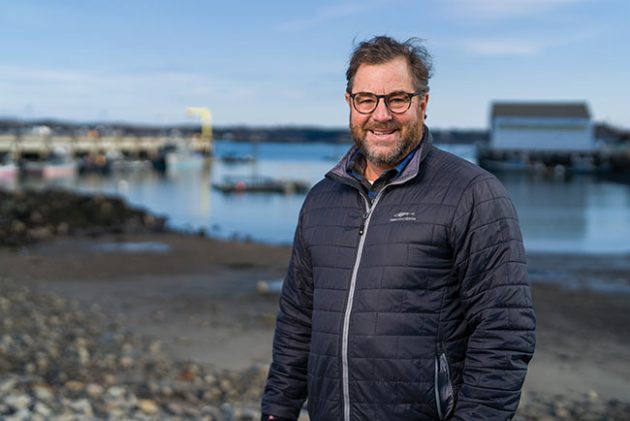 There is only one cage and pen fish farm in Kona, Hawaii. In fact, Blue Ocean Mariculture is the only open ocean aquaculture farm growing fin fish in the entire U.S.

“This status is because of the responsible practices undertaken by our founders since the start of fishing,” said CEO Dick Jones. “We are the first finfish cultivation facility in the United States to be certified by the Aquaculture Stewardship Council (ASC).”

Although the farm is not in federal waters, deep water submersible pens remove their stock from potential near-shore conflicts while making it easy to monitor and maintain water quality, preserve seafloor health, and limit wildlife interactions.

“Our fish are fed a premium diet of fish meal, fish oil, and non-GMO grain while spawning naturally under observation to ensure that population is controlled to prevent overwhelming the local ecosystem,” he said.

The farm, only 0.4 miles offshore, but it reaches a depth of 210 feet of water. The water conditions mimic farms that are farther offshore. The operation has a 90-acre concession and it holds a permit for more cages. The entire farm plans to have seven cages in the water by the end of this year.

“We need aquaculture to feed the world into the future,” said Jones. “The Northwest Aquaculture Alliance plays an important role in promoting the many benefits of responsible aquaculture while providing a platform for networking opportunities in the aquaculture sector.”

Predators are not a big problem in Kona; but because there are Hawaiian Monk Seals around the site and they are endangered, scientists do everything in their power to minimize interaction. The farm also hosts several species of sharks, along with dolphins.

Jones states emphatically that nothing at all is being done to eradicate these pests.

“Why would we want to eradicate them?” he asks. “They are living creatures and we are passionate about the ocean ecosystem. We live with them, as they live with us.”

Size matters: Small pens are used to grow white sea bass, which are tagged at 3-4 inches, put into the pens until they reach nine inches when the fish are tagged and released.

He predicts more fish will be released.

The pens have predator nets extending into the water keeping the pinnipeds away from the fish nets inside. There are also barriers above the surface to keep them from hauling out on the pens.

Sea lice are also a problem. The institute is working to permit a farm in deep ocean water; clean water in the Channel Islands.

“Invasive species are not farmed in U.S. waters,” stated aquaculture experts at NOAA Federal. “As outlined in NOAA’s Marine Aquaculture Policy, aquaculture development in federal waters is compatible with the functioning of healthy, productive, and resilient marine ecosystems and only native or naturalized species are farmed.”

The administration supports cutting-edge science and research as well as federal policy making and regulation to grow sustainable marine aquaculture in the U.S. while supporting commercial and recreational fisheries. It also supports science, policies and regulations that allow communities to reap the social, economic and environmental benefits of aquaculture.

Michael Chambers, University of New Hampshire Research Associate Professor and the Aquaculture Specialist, says the locations of the cage and pens are at a depth of 35 feet.

“The AquaFort is the name of the 2 Bay floating system that produces steelhead trout, blue mussels and sugar kelp that is raised on vertical dropper lines like the mussels.”

“This method of culture is called Integrated Multitrophic Aquaculture or IMTA,” he said. “It is located just offshore of New Castle, N., at the mouth of the Piscataqua River.” 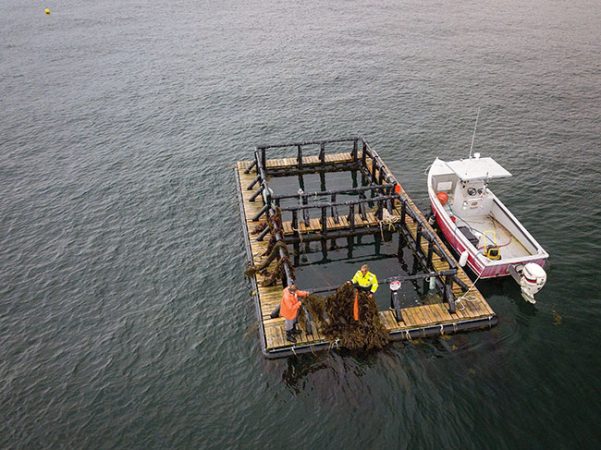 The aquaculture industry has radically changed over the years. Chambers said culturing all three species together on a floating platform is novel and there is no industry doing this type of aquaculture. He hopes this will change as the lower trophic seaweed and shellfish species extract nutrients from the fish and provides a cleaner footprint on the environment.

The cautious, albeit, good news is that the operation does not have any invasive species that affect the culture system. On the down side, scientists do see the Gulf of Maine warming each year, which stresses the trout. There is also some incidence of sea lice. There is minimal damage by these invaders due to ongoing awareness.

“To circumvent these issues, we culture the trout during the colder months of the year,” said Chambers. “This is from Oct-June and before temperatures reach 60 degrees Fahrenheit in July, August and September.

“Sea lice are not a problem during the cooler times of the year. To reduce sea lice, we add lump fish to the pens to clean the trout and reduce lice counts.”

Chambers is optimistic about the future.

“I believe there is great opportunity for offshore aquaculture in the U.S.,” he said. “You do not need much 3D ocean space to produce millions of pounds of fish per year.”

This should be carried out in a responsible manner and include shellfish and macroalgae farms near or around the fish farm. These lower trophic species bio extract nutrients from the fish to help maintain a cleaner environment.

The biggest problem facing offshore aquaculture in the U.S. is permitting and NGO’s/Nimby’s that are against the concept. The U.S. is a world leader with land agriculture. We could be the same offshore if the U.S. government got behind ocean farming efforts.

“We need to become seafood secure and not import 91 percent of the seafood we eat. It just makes sense.”