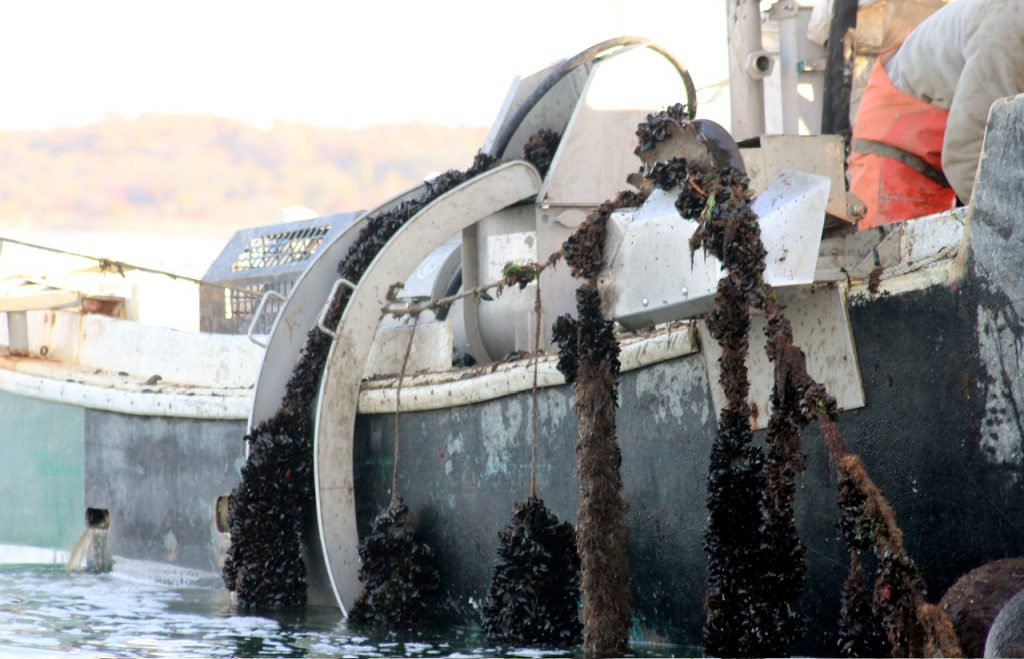 Close to 95 percent of mussels eaten in the United States are imported. This is about to change.

The 28.5-acre lease, located about four miles off Cape Cod in Nantucket Sound, was issued to Dominic Santaro of Santaro Fisheries Corp., based in Chatham, MA.  Santaro has harvested wild mussels for many years and owns equipment to harvest, bag and grade mussels at the site.  The lease allows only three long lines for the initial operation, but ultimately could hold 25 long lines with droppers spaced every three feet on the line.  The 480-foot lines will be suspended to a depth of 20 to 30 feet.

Scott Lindell, Director of the Scientific Aquaculture Program at the Marine Biological Laboratory in Woods Hole, MA, who has acted as scientific advisor for the project, estimates that Santaro could harvest around 10,000 pounds of mussels per line per year, with a conservative total for the site of 250,000 pounds a year for 25 lines.  “But,” he adds, “it would be possible to go to 20-foot droppers if he had a large enough vessel to pull up the line, and then he could anticipate as much as 500,000 pounds annually.”   He says Santaro is satisfied with starting out small to test the technology and methods of working the site.  Sometime after his first harvest, there will be a review process to determine when he can add more lines.

Bob Rheault, director of the East Coast Shellfish Growers Association, says when he was young, mussels were used in the U.S. for bait, and people who ate them were considered odd. But now that they have gained popularity as food in the United States, he believes offshore mussel aquaculture is the next big thing for the shellfish industry.  ‘The potential is huge,” he says.  The technique is commonly used in other parts of the world, including Spain, New Zealand and Canada.

Close to 95 percent of the mussels eaten in the United States are imported.  In 2011, Lindell says, the U.S. imported 90 percent of its fresh mussels from Canada — close to 14,000 metric tons — with a value of around 40 million dollars. NOAA figures from 2013 show that worldwide U.S. mussel imports, including live, frozen and processed, totaled 28,000 metric tons with a value of $93 million.

Opening federal waters for commercial mussel aquaculture could help reduce this trade deficit by making it possible to increase production at a time when lease sites in state waters are diminishing due to factors like neighbor opposition, increased recreational use and fishing.

Lindell hopes that ultimately, attaining a federal permit will not be as laborious as dealing with the multiple agencies that are involved in permits for leases close to shore.  He says his first aquaculture lease in state waters took 18 months for completion; this initial federal lease took 13 months, but he and Rheault agree that the first leases are naturally more difficult to obtain and the timing should improve.

The leasing process was longer than Lindell had anticipated, he says, primarily because although NOAA supports developing aquaculture in offshore waters, the agency is also mandated to protect endangered whales and sea turtles.  The lease requires Santaro to use HDPE sheathing on three buoy lines for each longline to keep them stiff and unlikely to entangle marine animals.  Lindell said he didn’t think it would interfere with working at the site.

Rheault found the delays over endangered species particularly frustrating.   “When we went scurrying around the planet asking ‘Do you have any problems,’” he says, “planet-wide there was one recorded whale that washed up near a farm in New Zealand or Australia, and evidence pointed to its being already dead.”  Lindell says there was also one instance of a baby humpback whale being caught in gear at a site off Australia, but no others worldwide.

In the future, Lindell envisions cooperative leasing, with mussel farms sharing suitable wind farm sites, providing benefits to both the farmer and the energy company.  A farmer might leave a boat at the site and travel the six or eight miles from shore with the energy company’s boat.  He also might be able to situate monitoring devices at the site like a web cam which could keep him informed about the status of the lines, and if more buoyancy was needed.

Lindell also sees room for growing seaweed on offshore mussel farms, which he thinks might interest energy companies as an alternative sustainable energy resource for biofuel.

Both Lindell and Rheault would like to see the industry supported by a more streamlined leasing process for farms in federal waters.  They hope that commercial production offshore, with its potential for creating jobs, supporting sustainable aquaculture and reducing the number of imports and trade deficit will become more common.